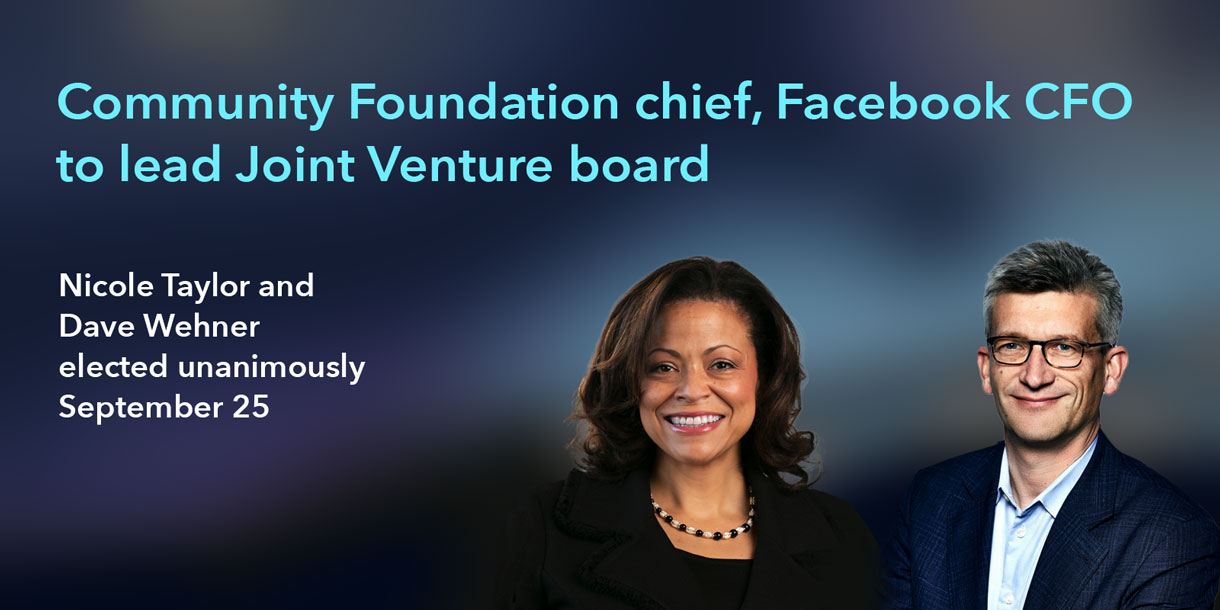 Two towering Silicon Valley figures have taken the helm of Joint Venture’s board of directors. Nicole Taylor, president and CEO of the Silicon Valley Community Foundation, and Dave Wehner, chief financial officer of Facebook, now serve as co-chairs of the governing body, following a unanimous vote by the board at its quarterly meeting held September 25.

Taylor and Wehner will team up with Joint Venture CEO Russell Hancock and the 50-member board to chart the future course of the organization. Silicon Valley’s recovery from the pandemic is their immediate priority; reimagining and reinventing the region is their long-term vision for Joint Venture.

Taylor, Wehner, and Hancock worked closely together on the Silicon Valley Recovery Roundtable where Taylor served as one of the co-chairs. The Roundtable delivered Building a Better Normal, a multi-faceted report outlining the region’s current challenges — those brought on by the pandemic and those that have become more urgent because of it. The implementation of the report’s recommendations is left to an open-source approach requiring cross-sector collaboration. Wehner and Taylor see Joint Venture as the organization that must pull it all together.

“As Silicon Valley moves toward recovery, I believe Joint Venture will play a crucial role,” said Taylor upon her election as Joint Venture’s co-chair. “We will work with local leaders to identify and implement innovative and equitable solutions to rebuild our communities.”

At the Community Foundation, Taylor oversees a $13.5 billion philanthropic engine that engages Silicon Valley titans including Mark Zuckerberg, Jack Dorsey, and Sergey Brin, all of whom have set up donor-advised funds. Taylor’s Mountain View-based organization is the nation’s largest community foundation.

"I am honored to be elected as Joint Venture's new board co-chair,” said Taylor. “I look forward to bringing my experience in the philanthropic sector—and all the community voices we represent—to my work in helping advance Joint Venture's regional mission during these unprecedented times,” she continued.

Taylor spent more than 15 years with the East Bay Community Foundation, eventually becoming its president and CEO for six years. She received both her M.A. in Education and A.B. in Human Biology from Stanford University, and she began her career as an educator in Oakland public schools.

Dave Wehner also welcomes his new role. “Silicon Valley is at a major inflection point,” he emphasized. “The COVID-19 crisis has created immediate challenges for everyone in the community and emphasized the importance of addressing long-term issues like housing affordability and adequate transportation infrastructure. We can’t tackle those problems without a trusted organization pulling everybody together, providing a compelling vision of who we can be and then making it happen. That’s why I’m eager to assume this role.”

“Silicon Valley is at a major inflection point...That’s why I’m eager to assume this role.”
-Dave Wehner, CFO, Facebook

Since 2014, Dave Wehner has been CFO of Facebook, based in Menlo Park, and with annual revenues of $18.7 billion. He leads the finance, facilities, and information technology teams. He joined the social media giant in 2011 as vice president of corporate finance and business planning. He was formerly chief financial officer of Zynga, Inc. and a managing director at Allen & Company, an investment bank focused on media and technology. Wehner holds a B.S. in Chemistry from Georgetown University, and an M.S. in Applied Physics from Stanford University.

Facebook recently announced a commitment to step up the fight against climate change. “As a global company that connects more than three billion people across our apps every month, we understand the responsibility Facebook has and we want to make a real difference,” detailed the announcement. The Facebook commitment aligns with Joint Venture’s recent doubling down on climate change initiatives through new partnerships and other enhanced measures.

Taylor and Wehner succeed San José Mayor Sam Liccardo and Matt Mahan, CEO of Brigade and a San Jose councilmember-elect. Mayor Liccardo will remain on the board.

Mayor Liccardo joined Joint Venture as a board member in 2014 and was elected co-chair in 2015. During his tenure, Joint Venture added a food recovery initiative, bulked up its community broadband efforts, and added the Silicon Valley Talent Partnership to its portfolio of initiatives. The Mayor also deepened Joint Venture’s ties to public agencies throughout the region.

“As the Valley’s importance on the global stage increases, Joint Venture has been instrumental in ensuring our innovation is felt in all corners of the region and all our community members can benefit,” said Mayor Liccardo. “As a native San José-an, it has been an honor to serve as co-chair of Joint Venture to help chart that path and I look forward to continuing that endeavor as a board member.”

Mahan has been a Joint Venture board member since 2013 and was elected as co-chair in 2018. Mahan first chaired Joint Venture’s development committee, extending the organization’s reach and competency. He also presided over the growth and expansion of Joint Venture’s Institute for Regional Studies. He leaves the board to step into his new role as Councilmember for San José’s District 10.

“Nicole and Dave have a vision for where we’re headed and a voracious appetite for the work involved.”
-Russell Hancock, President & CEO, Joint Venture Silicon Valley

“It has been a privilege to help lead an organization known both for thought leadership and action,” said Mahan. “I care very deeply about Joint Venture and its regional mission, which is why I’m so happy to hand my baton as private sector co-chair to someone with the vision and respect of Dave Wehner.”

Hancock lauded the selections. “Mayor Liccardo and Matt Mahan have been extraordinary chairs and their faces will be carved into Joint Venture’s Mount Rushmore,” he observed. “Now Nicole and Dave will build on top of the substantial foundation they have laid. They have a vision for where we’re headed and a voracious appetite for the work involved. They also bring with them the force of their organizations, which sets a standard for others to follow. I can’t wait for everything that comes next.”