For a Southern California beach boy who got tossed out of UCLA because he cut too many classes to go surfing, the tide certainly shifted for Chuck Weis.

Set to retire next June as Santa Clara County Superintendent of Schools after a 40-year career in education that stretches to an 11-page resume, Weis is riding a wave of success right back to the beach.

Just as summer arrives, it will find Weis relaxing at his custom-designed oceanfront home in Ventura County. “It’s my dream beach house,” Weis says. “I stole every good idea I could find in other homes and had it built in 2005.

“I am truly at home at the beach. My greatest enjoyment comes from digging my toes in the sand. No phone, no iPad, no laptop.”

Weis says he’ll be “trying retirement on for size” at the beach house and at a vacation home in Twain Harte, although he hasn’t ruled out consulting or working on a book for education administrators.

“I’ve traveled so much in my work that I’m not that interested in it, and I don’t like cruises,” he says. “For now I’ll be content to play tennis, ride my motorcycle, and do odd-jobs around the house.”

Silicon Valley schools and his profession will both be the poorer for Weis’ departure after four years heading a countywide system of 32 school districts, 265,000 students, 1800 employees with an annual budget of $280 million.

“I would like to think I’m leaving the state of public education here in good shape, both financially and with a better focus and direction, more connected to the values of Silicon Valley,” says Weis.

“The district was fiscally solvent when I came in,” says Weis, “and then we had the worst cuts to schools in the history of the state. The silver lining was that the American Recovery and Reinvestment Act replaced some of the money for schools for a short period of time, which softened the downturn.

“Since 52 percent of our budget is used for teachers’ salaries, we’ve had to increase class size to around 30 students in the lower grades and 36-37 in the secondary schools,” Weis added. “The average is 32-34. The national average class size is 17.” 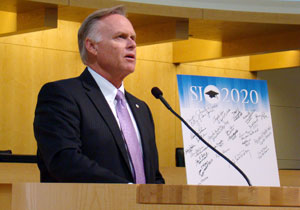 Among his more recent initiatives is a partnership with Joint Venture to explore collaborative purchasing of solar energy by schools and other renewable energy programs.

Weis said he willingly joined the Joint Venture board of directors upon his arrival here in 2008 because the organization has “big ideas to impact education in this area.”

He cited workforce development and career preparation in particular. “We need to help kids learn how to prepare for the world of work, not just take courses,” Weis says. “Eighty-five percent of jobs are invisible to most people. Kids need internships to learn what they like doing and what the everyday work culture is like.”

“Chuck has been a thoughtful and visionary leader for the education community in Silicon Valley,” said Muhammed Chaudhry, president and CEO of the Silicon Valley Education Foundation. “He not only understands the education space and can conceptualize it, but he knows how to build the culture of an organization.

“There are a lot of systems that need to move together – 32 unique school districts, teachers’ organizations, administrators, parents. Chuck delivered a culture of accountability and a clear vision on how the valley could become a leader in education.”

Weis himself admits to floundering when it came time for college. Born Walter Charles Weis III to a second-generation Los Angeles fire fighter and his wife, Jean, Chuck and his older sister, Kristina, grew up in the San Fernando Valley, where he played football at Granada Hills High School in the mid-1960s.

“I was supposed to be a fire fighter like my father and grandfather,” he says. “But I got into surfing and it took over my life. If I didn’t get in the water every day I’d get depressed.”

Weis, the first in his family to go to college, enrolled at UCLA as a pre-med chemistry student, thinking it couldn’t be any harder than high school, where he had done well.

“I joined the surf club and the surf team and I blew off classes to go to the beach,” he admits. “Then I failed calculus and got kicked out. That got my attention. I found out that I could go on academic probation and stay at UCLA if I got all B’s the next quarter. That really turned me around. I took a psychology class that stimulated me and did some work at local schools. I got hooked on education.”

Weis graduated from UCLA with his degree in psychology and was considering UCLA law school, but its emphasis on corporate law over more altruistic courses disagreed with him. He was accepted to California State University at Northridge for a masters program in psychology.

“It was five blocks from my parents house so I knew the area well. CSUN changed my life,” says Weis. “It was there that I realized we could make schools better, make sure every kid was excited about school.”

He earned his master’s degree in school psychology at CSUN in 1974 and later earned his Ph.D. in educational policy and organizational studies at UC Santa Barbara.

Weis began his professional career in the Fillmore Unified School District in Ventura County from 1974 to 1990, serving various roles that ranged from program coordinator to principal to assistant superintendent.

From there he served as an assistant superintendent with the Ventura County Superintendent of Schools Office and as a part-time faculty member of the graduate schools of education at Pepperdine University, CSUN, California Lutheran University and Cal State Channel Islands.

In 1993, Weis became the Ventura County Superintendent of Schools, a post to which he was re-elected four times, and served fifteen years until taking the Santa Clara position.

“There are two notable things about Chuck’s tenure here,” said Dennis Cima, senior vice president for education and public policy with the Silicon Valley Leadership Group. “One is his very strong desire to have the community and valley focus on closing the achievement gap. He’s been a real champion in that area.

“Second is his work on early childhood education. He really knows and understands it, and he gets that there’s a really strong return on investment. Plus, he has a great sense of humor and incredible knowledge of California policy and politics.” 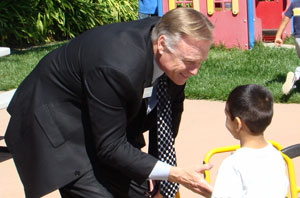 In addition to Joint Venture and the Silicon Valley Education Foundation, Weis currently sits on the board or holds a similar role with the San Jose Silicon Valley Chamber of Commerce, the Santa Clara County Education Coalition, Kids in Common, Gateways Cradle to Career Education and Workforce Partnership, the State of Women and Girls Advisory Board, and Juvenile Justice Systems Collaborative.

Weis is the recipient of dozens of honors for his contributions to education and the community, is the author of scores of publications, and has spoken widely.

“But,” he adds in a salute to his staff, “as my friend (former California State Superintendent of Public Instruction) Delaine Eastin once told me, being a superintendent is like being a turtle on a fence post – you know you didn’t get there alone.”

Even more central to Weis’ support system than his staff are his wife, Patricia Walsh, and his children by a previous marriage, Trevor, 31, Walter IV, 22, and 21-year-old “K.D.,” for daughter Kristen Diane.

Passion Rules
No Dare, No Flair
Expect to Wipe Out
Never Turn Your Back to the Ocean
Keep Looking Outside
Move Before it Moves You
Never Surf Alone!

Advice that has served Chuck Weis well, at the office or the beach.