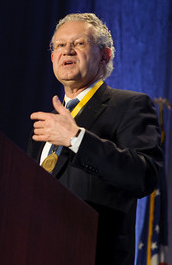 At the annual State of the Valley conference on February 18, 2011, Joint Venture bestowed its highest honor, the Packard Award for Civic Entrepreneurship, on Aart de Geus, co-founder, chairman and CEO of Synopsys. Carl Guardino, CEO of the Silicon Valley Leadership Group, presented the award to de Geus, a longtime member and former two-time chair of the SVLG board.

De Geus was born in 1954 in the small south Netherlands town of Vlardingen, near Rotterdam, one of three sons of Lodewijk and Martina de Geus. The family soon moved to Switzerland, where Aart grew up in a multicultural, multi-lingual environment, speaking Dutch at home, Swiss at school, and German with neighbors.

At an early age, he became interested in math, science, history and physics. He credits his early teachers with encouraging his unstoppable passion for learning, how people and things interact, and he loved to meet and talk with interesting people. “I can’t imagine not interacting with stimulating people,” he says.

At the same time, he had a creative side, too. At 14, he got his first guitar, took some lessons, and discovered another of his passions.

Inspired by American guitarist and songwriting legend “T-Bone” Walker, Aart cultivated what would be a lifelong love of electric blues. He also enjoyed folk and gospel music, and played in bands with his friends.

But rock stardom was not in the cards for Aart. He had much bigger things to accomplish. He earned his masters degree in electrical engineering at the Swiss Federal Institute of Technology before coming to the U.S. in 1979 to pursue his Ph.D. at Southern Methodist University in Dallas.

“I arrived in Dallas at midnight on August 1 to be startled by two things,” he recalls with a smile. “It was over 100 degrees in the middle of the night, and when I took the bus downtown I was surprised to find that the streets were full of cars.”

While completing his dissertation, Aart took a job in North Carolina with General Electric, where he managed the advanced computer-aided engineering group.

It was also in North Carolina, one night at a local square dance in 1985, that Esther John caught Aart’s eye. She was a Swiss undergrad studying epidemiology at the University of North Carolina in Chapel Hill at the time. They soon became inseparable, were married in 1991 and will be celebrating their 20th wedding anniversary this year.

In 1986, after GE exited the semiconductor business, Aart and several partners struck out on their own to start a company they named “Optimal Solutions.” When they moved the company to Silicon Valley, they found eight other companies with the same or similar names, so they re-named it as a hybrid of synthesis and optimization – “Synopsys.”

Over time the company flourished, as Aart became one of Silicon Valley’s early visionary executives. Always a hands-on leader as well as a listener, de Geus grew Synopsys into a global leader in electronic design automation. With headquarters in Mt. View, the company today has more than 60 offices in North America, Europe, Japan, Asia and India.

“Aart became one of Silicon Valley’s early visionary executives. Always a hands-on leader as well as a listener, de Geus grew Synopsys into a global leader in electronic design automation.”

Aart likes to say that if you have a positive experience early on – especially with a teacher – it changes everything. That’s why he is the driving force behind the Synopsys Silicon Valley Technology Outreach Foundation, which works to promote project-based learning among students and teachers – particularly with its popular science fairs and sciencepalooza!

Since 1999, the Synopsys foundation has provided teacher support and training, support to schools for materials and equipment, project supplies and incentives for teachers and students developing science projects for competition. Today the foundation has grown to support more than 125,000 students and teachers annually.

­­­The foundation serves as the major sponsor of the Synopsys Science and Technology Championship in Santa Clara County, and sponsors “Science-o-Rama!” a program of school-based fairs for middle and elementary school students.

The important thing to remember about Aart’s role in the community is that he does it not because it helps his bottom line or impresses his board or looks good in the press. He does it simply because he is answering a higher call to service beyond his everyday role and outside the workplace.

“The important thing to remember about Aart’s role in the community is that he does it not because it helps his bottom line or impresses his board or looks good in the press. He does it simply because he is answering a higher call to service beyond his everyday role and outside the workplace.”

He also is active as a member of TechNet and serves on the boards of Applied Materials, the Global Semiconductor Alliance and the Electronic Design Automation Consortium.

He has previously been honored with SVLG’s “Spirit of the Valley” lifetime achievement award, the Phil Kaufman Award for distinguished contributions to EDA and the GSA Morris Chang Exemplary Leadership Award.

When travel and time permit, Aart still loves to play his guitar at local events and in the music room he recently added to his house. And he is also an accomplished painter, specializing in abstract expressionism inspired by the great Jackson Pollock.

More important than anything else in Aart’s life, though, is his family, Esther and his daughters, Martina, 18, a student at MIT in Boston, and Alicia, 15, a high schooler currently taking driving lessons from her dad.