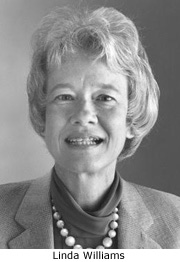 People who know Linda Williams describe her as gracious, witty and unflappable. But in addition, as the leader who has guided the largest Planned Parenthood organization in the United States through the culture wars of the last two decades, she has had to be, as she was once called by a member of the search committee that hired her, “tough as a burnt boot.”

She comes by it naturally. “There were thirteen attorneys in my immediate family. When I was young, I used to sit at the dinner table and watch them argue for sport. This gave me one of the greatest gifts of my upbringing, and it has served me well at Planned Parenthood – I don’t take disagreement personally.”

At Joint Venture she is a member of the board, serves on the executive committee, and serves as an advisor to the annual Silicon Valley Index. She also brings her expertise in nonprofit governance and her commitment to inclusion to help steer the organization.

The career journey that led Linda to Planned Parenthood has been meandering and serendipitous. “When I graduated from college, I was pulled in two directions. On the one hand, I had an extreme sense of fairness and felt a responsibility to take action to help create change. On the other I was from a generation in which women tended to follow very traditional paths.”

After she graduated from college, Linda moved to her family home in Tulsa, where she took a job as a reporter (“my job was to report on gentler things.”) She soon married her husband John, who worked for the Southern Pacific Railroad, a job that took them all over the country.

The journey took her to graduate school in creative writing at San Francisco State; to rural El Centro, New Mexico (“I literally read every book in the library”), to Washington, DC, where she worked in a variety of social service organizations; to graduate school in Psychology at Santa Clara University; and to work with a market research firm in Pennsylvania, all while she raised two sons.

“I always kept my California driver’s license as a talisman.”

No matter how far they traveled, she and her husband felt their spiritual home was in California. “I always kept my California driver’s license as a talisman,” she recalls. When she was offered the Executive Director position at the Palo Alto Red Cross they jumped at the opportunity.

She feels all the stops on the journey prepared her for Planned Parenthood. “No experience in life is ever wasted,” she says. “In all my travels I kept trying one specialty after another. But everything I did eventually taught me that I’m a generalist and I like to run things.”

By 1989 she had become extremely passionate about the state of women’s issues, particularly those relating to reproductive health. “I knew I wanted to do something about it,” she recalls, “so I called the Director of Planned Parenthood in Santa Clara County and told her I would like to volunteer. As luck would have it, she told me she had just submitted her resignation and suggested I apply for the job.”

She spent the next nine months (“a gestation period”) proving she was tough enough to handle the job, convinced the search committee, and was hired as Executive Director. The organization then bears scant relation to the organization she heads today. At the time, Planned Parenthood Mar Monte served only Santa Clara County, with five clinics and a budget of $3 million.

Eleven mergers later, she heads the largest Planned Parenthood in the country, twice as large as any other. It serves 40 counties in California and Nevada, with 34 clinics, 35 satellite clinics and a budget of $70 million.

When she took the job, the organization was threatened by changes in the public health landscape. “Managed care had come in and changed everything, particularly in California, and it was no longer possible for a lot of small grass roots organizations to continue to provide services. We figured out a financial model that worked and we were able to survive.”

Survival involved mergers, which came in rapid succession – nine of them between 1993 and 1997. “For me, ‘mergerhell’ is still one word,” she says ruefully. “Each successive merger would blow our systems and destabilize operations.”

However, as the mergers took hold the organization thrived. Today Planned Parenthood Mar Monte provides health care services ranging from contraception and abortion to prenatal care to full scope primary care. Clients are primarily poor – 92% rank at 250% of the poverty line or lower. Overall the organization sees 220,000 people in over 500,000 visits per year. About 25% of all women visit a Planned Parenthood facility in their lifetimes. Men and children are becoming an increasingly significant portion of the organization’s clients.

Linda attributes success to her persistence, and to being a “change junkie.” Those who know her well see someone who has found a perfect match of skills and passion.

“For Linda, she’s not doing a job – it’s almost a calling,” says Santa Clara County Supervisor and Joint Venture board member Liz Kniss. “She’s found her passion, her passion matches her belief system, and she’s been able to convince others that what the organization does is essential.”

Cindy Chavez, who serves on the Planned Parenthood board, attributes the success to her unique leadership skills. “Many Valley leaders are good thinkers,” Chavez says, “and many are good actors and many are good strategists. Linda is unique in that she can do all three.”

She has been a part of the organization ever since. “Silicon Valley is the economic engine that drives Planned Parenthood’s success, and Joint Venture is a key to growing that engine. I see my role at Joint Venture as a voice for the potential of the entire Valley.” She believes that the Silicon Valley Index has grown into an important annual benchmarking of the spectrum of the Valley’s population, providing an important look at the Valley’s health, education and skill base.

“I see my role at Joint Venture as a voice for the potential of the entire Valley.”

As an example of the rich potential of the Valley community, she cites Planned Parenthood’s Teen Success Program, which focuses on breaking the cycle of teen pregnancy. The program, championed by former Joint Venture CEO Becky Morgan, requires teen mothers to attend weekly sessions, to complete high school, and to avoid having a second pregnancy before they graduate. Of the mothers in the program, 98% complete it successfully, and most develop goals for a career that involves post-secondary education.

“The program shows how just two hours a week of affirmation can break a cycle,” she says. “We have plenty of talent here in the Valley to fuel our economic engine, but to engage people we often need to break destructive cycles and help people become productive instead. This is the kind of thing I’d like to see Joint Venture take on because it brings together every element of the Valley’s leadership.”

As she speaks, she clearly warms to the challenge. There can be no mistake that she is tough enough and skilled enough to handle whatever comes her way.