2014 Silicon Valley Index: Economy is sizzling, but not for all 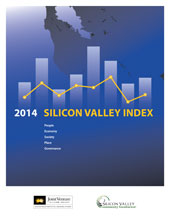 The comprehensive yearly analysis of the economic strength and overall health of Silicon Valley also shows the most impressive gains in commercial development in a decade, a 52 percent increase in foreign immigration and the highest net migration in 14 years.

But the data also indicates that the new wave of prosperity poses greater challenges for the region to accommodate sustained growth and that the gains are bypassing the lowest earning groups, leaving the less affluent further behind than ever.

“The Silicon Valley economy is sizzling like nowhere else in the country,” said Russell Hancock, President and CEO of Joint Venture. “A surge of innovation between San Jose and San Francisco is driving prodigious growth from Market Street to Market Street, but with that comes tough new challenges in housing, transportation and infrastructure for the entire region.”

“This year’s Index proves that a rising tide is not enough to lift all boats,” said Emmett D. Carson, Ph.D., CEO and President of Silicon Valley Community Foundation. “The gaps and disparities, particularly for low and middle income households and along racial lines, are more pronounced than ever. The community must take deliberate policy actions to make sure that everyone has the opportunity to share in the region’s prosperity.”

The 72-page 2014 Index reports the latest data and trends in economic development, workforce, housing, education, public health, land use, environment, governance, arts and culture and other sectors throughout Santa Clara and San Mateo counties, and portions of Alameda and Santa Cruz counties and San Francisco.

Other highlights of the 2014 Index include:

Jobs –The region added 46,665 jobs in 2013, an increase of 3.4 percent over the prior year. California as a state, meanwhile, is still 2.2 percent below pre-recession jobs totals. The job growth is driven by computer hardware design, information services and the Internet industry, plus community infrastructure, health care, construction, and a range of other business services. The regional unemployment rate has continued its downward trend, reaching 5.8 percent in November 2013. While unemployment has declined among nearly all racial/ethnic groups in Silicon Valley since 2011, it is still over 10 percent for African-Americans.

Population – The region’s population growth has accelerated over the last year due to a 52 percent increase in foreign immigration in 2013 over the previous year. The region’s total population grew 1.31 percent last year compared to 0.88 percent statewide, and our net migration (13,766 people) has not been this high since 1997, when it reached a high of 14,515.

Income – The share of households in Silicon Valley earning more than $100,000 increased two percentage points to 45 percent in 2012, while the share of households earning $35,000 to $99,000 decreased two percentage points to 35 percent. Although median household income has finally started to increase following a four-year decline (up $1,028 between 2011 and 2012), the increase in average annual rental expenses (up $1,526) is outpacing income gains. Income disparities persist between racial and ethnic groups. The lowest-earning racial/ethnic group earns 70 percent less than the highest earning group.

Housing - Silicon Valley’s housing market is becoming an increasingly inhospitable environment for first-time homebuyers.  Fewer than half of Silicon Valley’s first-time homebuyers can afford to purchase a median-priced home, compared to 59 percent in the state. And while the total number of home sales has picked up, median prices continue to climb (an increase of 10 percent in the last year). While 7,431 new residential units in building permits were issued in the first 11 months of 2013 – a high number compared with previous years – it is not enough to support the 33,636 new residents.

Silicon Valley Community Foundation makes all forms of philanthropy more powerful. We serve as a catalyst and leader for innovative solutions to our region’s most challenging problems and give more money to charities than any other community foundation in the United States. SVCF has more than $4.7 billion in assets under management. As Silicon Valley’s center of philanthropy, we provide thousands of individuals, families and corporations with simple and effective ways to give locally and around the world. Find out more at www.siliconvalleycf.org