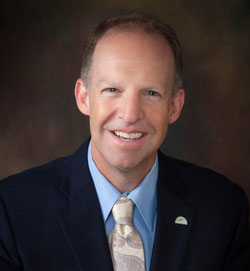 Carr, a member of the Morgan Hill City Council since 2000 and former public affairs official for San Jose State University and Stanford Hospital and Clinics, becomes second-in-command to Joint Venture CEO Russell Hancock, supervising the day-to-day operations and management of the organization.

“Larry’s two decades of management experience in the public and private sectors in Silicon Valley make him ideally suited to this new role in our growing organization,” said Hancock, who conducted a wide search to fill the position.

Adding Carr to the executive team frees Hancock to concentrate more on growing membership, fundraising and overall strategic planning for Joint Venture and its Silicon Valley Institute for Regional Studies, which he serves as president.

A native of Morgan Hill and a political science graduate of San Jose State University, Carr has worked in the offices of Representatives Norm Mineta and Anna Eshoo. He later headed education and workforce preparedness for the Silicon Valley Leadership Group, was director of government and community relations for Stanford Hospital and Clinics and served as associate vice president of public affairs at San Jose State, where he is a distinguished alumnus.

Larry is active in a variety of community and volunteer organizations and was named by the Silicon Valley/San Jose Business Journal in 2004 as one of “40 Under 40” people to watch for contributions to the community.