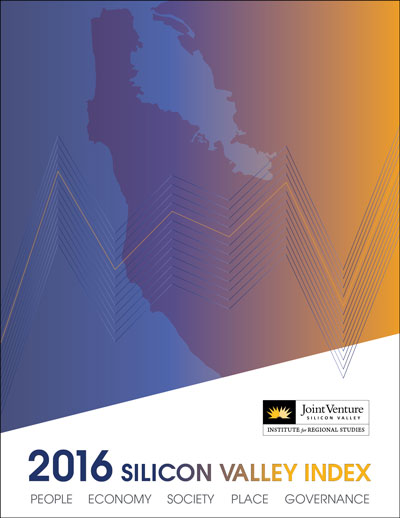 February 10, 2016 – Sustained growth of the Silicon Valley economy is swelling to new levels that have Bay Area housing, transit and highways bursting at the seams and hard pressed to accommodate the wave of prosperity, according to the 2016 Silicon Valley Index released today by Joint Venture Silicon Valley.

Nearly every category in the past year is, in a word, up. Jobs and income – up. Patents – up. Angel investments and venture capital – up. New office, warehouse and hotel development – up. Immigration – up. Housing prices and rents – up. Transit ridership, traffic congestion, commute times – up, up, up. About the only categories down are unemployment, building vacancies and housing inventory.

“It’s extraordinary, really, and a thing to celebrate,” said Russell Hancock, CEO of Joint Venture and president of the Institute. “This growth just keeps accelerating. We’re now adding jobs at a rate we haven’t seen in 15 years, and that’s powering everything else. But with growth comes challenges and now we have to mobilize like never before.”

The comprehensive yearly analysis of the economic strength and overall vitality of Silicon Valley shows 134,000 new Bay Area jobs created between mid-2014 and mid-2015, average annual earnings up to $122,000, $24.5 billion in venture capital investments in 2015, 19,000 new patent registrations in 2014 and more than 23 million square feet of new development approvals over the past two years.

At the same time, widening income inequality persists, the median sale price for a home is up six percent to $830,000, rental rates are up eight percent, and average commute times rose to 27 minutes.

Other highlights of the Index:

Employment -- Employment levels have not only far surpassed pre-recession (up 11.5% since 2007) but job growth is accelerating. In 2015, the Silicon Valley employment growth rate was +4.3% – higher than any other year since 2000. With rising employment levels, unemployment rates have decreased (dropping over the last six years) reaching 3.6% in November 2015. The 3.6% unemployment rate in Silicon Valley was significantly lower than throughout California (5.7%) and the United States (4.8%) during that same month.

Innovation and Entrepreneurship -- The region’s innovation engine is going strong, with year-over-year increases in the number of patents filed by Silicon Valley inventors (up 14% in 2014), regional GPD (+2.1% after inflation-adjustment), angel investments (which reached $1.4 billion in Q1-3), and the amount of venture capital infused into Silicon Valley companies (which, along with San Francisco VC investments, reached $24.5 billion in 2015, far exceeding the prior year total of $19.8 billion and representing the greatest amount of VC funding in any one year since 2000). For the second year in a row, San Francisco’s influence on overall regional VC investment totals was significant, and was strongly influenced by a handful of very large deals (three over $1 billion each, including Airbnb, Uber, and Social Finance).

Income -- Income and wages in Silicon Valley remain significantly higher than in the state or nation as a whole. A variety of income measures show continued gains, outpacing inflation. Between 2013 and 2014, per capita income increased by 1.9% to $79,108 – rising for all racial and ethnic groups – and median household income increased by 4.4% to $98,535. This trend continued into 2015, with an average wage increase of 5.6% since 2014 (reaching $110,634). And as income levels rose, poverty rates – which fell to 8.1% in Santa Clara and San Mateo Counties in 2014 – declined. The 2014 poverty rate in Silicon Valley, particularly the childhood poverty rate (8.9%), was much lower than in San Francisco, California, or the United States as a whole.

Non-Residential Development & Commercial Space -- The region’s businesses and services continued to expand in tandem with employment growth. This expansion is reflected in the large number of development approvals over the past two fiscal years (23.2 million square feet –nearly as much as during the prior five years combined), the increasing amount of new office space construction (3.14 million square feet – more than any other year since 2001), the revival of new warehouse development after fourteen years without any, declining building vacancy rates, and increasing asking rents (reflecting changes in supply and demand).

Housing -- As employment growth accelerates and the region’s population continues to grow rapidly, housing remains a critical issue. Low housing inventory and increasing demand are driving up median sale prices – which reached $830,000 in 2015 (6% higher than the previous year) – making it more difficult for first-time homebuyers to get into the market. Along with increasing home prices, rental rates have gone up 8% year-over-year.

Traffic -- Despite increases in public transit ridership, traffic congestion has become increasingly worse as the number of commuters increases. Average commute times to work have risen to 27 minutes (up 14% over the last decade). Annual delays (which reached 67 hours per person in 2014) and excess fuel consumption (28 gallons/person/year in 2014) due to congestion are further indicators of this growing issue.

Inequality -- While a variety of income measures indicate positive growth within the region, Silicon Valley income and wages vary significantly by skill and educational attainment level, racial and ethnic group, gender, and occupation. These income and wage disparities persist as the region grows additional high- and low-paying jobs (with fewer in the middle) and as the share of high-income households increases. For example, in 2014 the gap in per capita income between Silicon Valley’s highest- and lowest-earning racial or ethnic groups was $43,125 (a ratio of 2.9 for highest- to lowest-earners), and the gap in median income for residents with the highest and lowest educational attainment levels was $78,865 (a ratio of 4.4).

Residential Turnover -- Although rising incomes and an increasing share of high-income households may appear to be positive signs for the region’s residents, they may also indicate a turnover in Silicon Valley residents. As housing costs increase, Silicon Valley residents may choose to move elsewhere, with new residents moving in to fill the region’s growing employment demands. Between July 2014 and July 2015, the region experienced a net influx of more than 14,000 foreign immigrants and nearly 600 domestic migrants.

Hotel Development -- While planned non-residential development projects during FY 2014-15 range from large office and industrial space to mixed office/commercial space and institutional development (e.g., schools and churches), among other types, there was a large amount of planned hotel development among a handful of Silicon Valley cities, including South San Francisco, Mountain View, Cupertino, San Jose and Morgan Hill. It was coupled with in-progress hotel development, and consistent with a +3.7% growth in Accommodation and Food Services jobs.

Environmental Leadership -- Silicon Valley is continuing to exhibit leadership across environmental indicators. The region has responded to persistent drought conditions with a significant decline in water consumption (down 17% to 112 gallons/person/day) and an increase in the recycled percentage of water used. Additionally, Silicon Valley residents are combatting climate change by switching from cars with traditional fossil fuel combustion engines to electric vehicles (with more than 25,000 EV drivers in 2015, representing 20% of the state’s drivers) and by expanding EV charging infrastructure (reaching more than 1,000 public charging outlets in 2015, representing 13% of all outlets within the state). Lastly, the cumulative installed solar capacity within Silicon Valley increased by 20% between 2014 and 2015, reaching 272 megawatts and helping to decrease the region’s overall reliance on grid electricity.

Foreign-Born Residents -- Silicon Valley has an extraordinarily large share of residents who are foreign born (37.4%, compared to California, 27.1%, or the United States, 13.3%). This population share increases to 50% for the employed, core working age population (ages 25-44), and even higher for certain occupational groups. For instance, nearly 74% of all Silicon Valley employed Computer and Mathematical workers ages 25-44 in 2014 were foreign-born.

The Index is published in conjunction with the annual “State of the Valley” conference, a town hall-style gathering of regional leaders, elected officials and citizens in a daylong discussion of Silicon Valley’s economic opportunities, challenges and future. The 2016 conference takes place Friday, Feb. 12, at the San Jose McEnery Convention Center.

The complete 2016 Silicon Valley Index is accessible online at www.siliconvalleyindicators.org and may be downloaded from the Joint Venture website at www.jointventure.org.