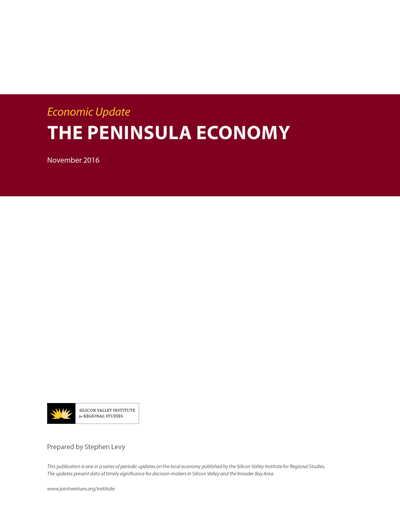 The region’s unemployment rate has fallen below four percent – levels not seen since the dot com peak in 2000 – and poverty rates are well below state and national levels, according to the report.

The Peninsula sub region – Santa Clara, San Mateo and San Francisco – added 65,600 jobs and 39,800 residents in the past 12 months, the report says, leaving the region 60,000 housing units short of those needed to accommodate the growth over the past nine years.

"This data underscores what anyone living on the Peninsula already knows, that surging job growth has brought many residents back into the workforce while also resulting in out of each housing costs and growing congestion," said Stephen Levy. director of the Center for Continuing Study of the California Economy. "With no end to job growth soon, the region needs to address housing and transportation challenges as soon as possible."

In the past 12 months, the report notes, 46,500 residents joined the Peninsula workforce. Despite continuing baby boomer retirements, unemployment rates have dropped to 3.8 percent in Santa Clara County, 3.3 percent in San Francisco and 3.1 percent in San Mateo County.

Meanwhile, the unemployment rate is 5.5 percent in California and five percent nationwide. Poverty rates remain above pre-recession levels in Silicon Valley but are well below state and national averages and have been declining slowly.

The latest Peninsula economy report also noted that real GDP increased by 8.9 percent in the San Jose metro area in 2015, more than twice the state gain and nearly four times the national average.

Stephen Levy, a member of the Institute board, prepared this economic update.