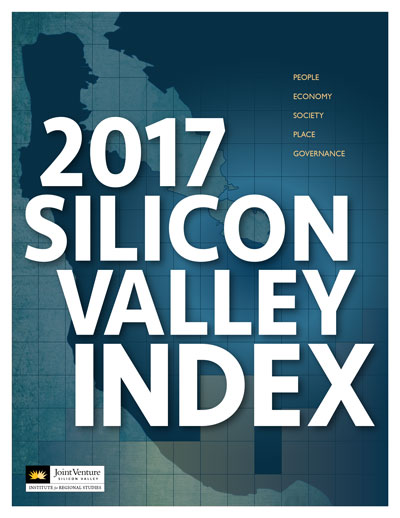 The latest data shows a slight slowdown from previous years, the report notes, but Silicon Valley’s growth is still outpacing California and the nation as a whole in many categories.

The study shows jobs, income, investments, innovation and office construction continue to swell, but corresponding surges in traffic congestion, commute times, housing costs and earning disparities challenge the region and its people as never before, the report concludes.

“The story hasn’t changed since we came roaring out of the Great Recession starting in 2010 and created a new wave of innovation around the internet, mobile devices, software and big data,” said Russell Hancock, CEO of Joint Venture and President of the Institute. “The pace slowed in 2016, but ever so slightly. And yet there is no talk of a bubble bursting. If anything, the talk is about the toll our growth is taking on the region.

“It’s become a familiar refrain: growth has its perils,” Hancock added. “It strains our infrastructure, decreases our quality of living and puts housing out of reach for too many. Income disparities are more pronounced than ever, changing the character of our region and raising profound questions about community and cohesiveness.”

The Index shows the Silicon Valley population has now grown to 3.05 million, up from 2.84 million, or 7.6 percent, since 2010. The share of foreign born residents in San Mateo and Santa Clara Counties alone is 38 percent – just over one million people – and tech workers in the core working age group of 25-to-44, 67 percent are foreign born. The figure is even higher for working women in that cohort, 76 percent.

The comprehensive yearly analysis of the economic strength and overall vitality of Silicon Valley shows the region added 45,621 new jobs last year and nearly 300,000 since 2010, dropping unemployment to a low of 3.1 percent as of last May.

The 2017 Index also reports that average annual earnings in the valley reached their highest level ever – $125,580. Per capita income is also at an all-time high of $86,976 and median household income is at $102,036 and growing. Gains in per capita income, however, varied significantly by race and ethnicity, with some groups losing ground.

Other highlights in the Index:

• Since 2005 there has been an increase of 228,000 residents from San Mateo and Santa Clara Counties who commute to work, plus 57,000 additional commuters coming into Silicon Valley from San Francisco and Alameda Counties.

• Cost of goods and services in the Bay Area has increased 27 percent over the past ten years and the median sale price of homes in Silicon Valley reached $880,000 in 2016, a price fewer than 40 percent of first-time homebuyers can afford.

• One of every 12 Silicon Valley residents lives below the federal poverty threshold and one in 11 children lives in poverty. Nearly a third of the region’s households do not earn enough to meet their basic needs without public or private, informal assistance, and this share jumps to 59 percent for Hispanic or Latino households.

The Index was authored by Rachel Massaro, Joint Venture vice president and chief researcher for the Institute, with assistance from Stephen Levy, director of the Center for the Continuing Study of the California Economy and a senior advisor to the Institute.

The 88-page Index reports the latest data and trends in economic development, workforce, housing, education, public health, land use, environment, governance, arts and culture and other sectors throughout Santa Clara and San Mateo counties and portions of Alameda and Santa Cruz counties and San Francisco.

The Index is published in conjunction with the annual "State of the Valley" conference, a town hall-style gathering of regional leaders, elected officials and citizens in a daylong discussion of Silicon Valley’s economic opportunities, challenges and future. The 2017 conference takes place Friday, Feb. 17, at the San Jose McEnery Convention Center.

The complete 2017 Silicon Valley Index is accessible online at siliconvalleyindicators.org and may also be downloaded from the Joint Venture website.