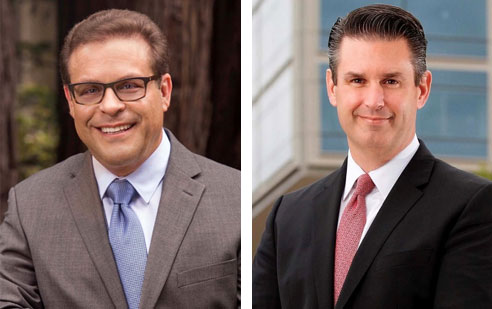 June 9, 2017 – The Joint Venture board of directors today elected Dr. Scott Brandt, Vice Chancellor of the University of California at Santa Cruz, and David Entwistle, President and CEO of Stanford Health Care, as its newest members.

Dr. Brandt has been UCSC’s vice chancellor for research since 2013 and a professor of computer science in the Baskin School of Engineering since 1999. Prior to joining UC Santa Cruz, he spent ten years in the computer industry, holds eight patents and has launched three startups.

Entwistle joined Stanford Health Care last summer after serving as CEO of the University of Utah Hospital & Clinics for nine years. He previously held senior executive positions at the University of Wisconsin Hospital and Clinics in Minnesota and the City of Hope National Medical Center in Duarte, California.

He earned his bachelor’s degree in health sciences from Brigham Young University and a master’s in health services administration from Arizona State University. He was also awarded a postgraduate administrative fellowship at the University of Texas M.D. Anderson Cancer Center.