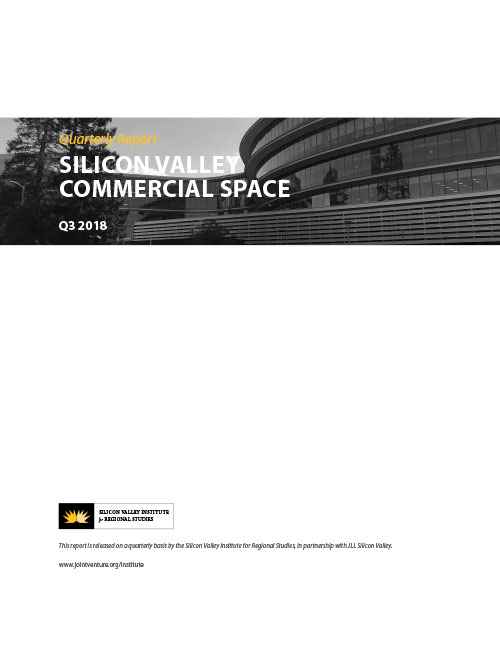 October 22, 2018 – The surge of commercial space development in Silicon Valley continued unabated in the third quarter of 2018, with more than ten million square feet of new space under construction and the industrial space vacancy rate at an 18-year low of 2.6 percent, the Silicon Valley Institute for Regional Studies reported today.

The Institute’s latest quarterly commercial real estate report, prepared in partnership with JLL Silicon Valley, shows that more than three million square feet of newly constructed office and industrial space was delivered to the market this year, a third of that total in Q3 alone.

Included in that number were three major projects: Landbank’s 777,000-square-foot Central and Wolfe campus in Sunnyvale, entirely released to Apple, and two large developments on Park Boulevard in Palo Alto. The larger of those, a 36,000-square-foot Jay Paul project, was preleased to Chinese tech company Tencent.

While Silicon Valley’s industrial space vacancy rate is the lowest since 2000, the report noted, office space vacancy has risen dramatically this year (up 4.2 percentage points to 17.9% in Q1-3 2018). This relatively high vacancy rate is influenced by continued M&A and consolidation activity, primarily in the hardware sector in North San Jose, as well as occupancy losses in the airline and finance industries in central San Mateo County (including space released by Visa, MasterCard, and Virgin Airlines).