Consumers stock up, change what they buy, yet overall spending is down

April 27, 2020 – Joint Venture Silicon Valley’s Institute for Regional Studies has released an analysis of the region’s consumer spending trends and how they have changed during the COVID-19 pandemic, using data from Earnest Research. The Institute also compared this granular data to the U.S. Census Bureau’s Advance Monthly Sales for Retail Trade and Food Services Report for March 2020 which was released on April 15, including retail sales trends for the U.S. overall and changes between February and March.

Earnest Research is a leading data analytics company. Their consumer spending data is derived from a panel of nearly six million U.S. consumers, normalized by the Earnest Consistent Shopper Methodology.1 The Earnest Research COVID-19 Tracker has generously been made available to nonprofit organizations and government agencies across the country.

The Institute’s Analysis of the Earnest Research COVID-19 Tracker data showed that prior to the shelter-in-place order, Silicon Valley consumers stocked up on supplies (primarily from in-store retailers), purchases shifted from in-store to online, and consumers have changed the types of things that they’re buying. Overall consumer spending is down compared to the same time last year, and the decline is more pronounced in Silicon Valley than in California or the nation as a whole.

“We know that people stocked up prior to the shelter-in-place order, since lots of store shelves remain bare, missing essential items like flour, pasta, rice, toilet paper, diapers and wipes, and disinfectants of all kinds,” said Rachel Massaro, the Institute’s Director of Research. “While it’s not surprising that purchasing has since shifted to more online orders, it’s interesting to note the differences between Silicon Valley, statewide, and national spending trends amid the crisis.”

Massaro went on to note that, “Online purchases represent a larger share of Silicon Valley consumer spending compared to the state and nation, and the peak in-store purchases occurred a week sooner here due to our early shelter-in-place orders.”

If the shifts in consumer spending exhibited in the Earnest Research data and/or the national Census data trends persist post-pandemic, Silicon Valley could lose as many as 8,560 to 12,150 jobs across retail, accommodation, and food services – a segment which currently comprises 16% of the region’s total employment.2

1. Consumers stocked-up prior to the shelter-in-place order.

The pre-shelter-in-place spike in consumer spending was more pronounced in California and the U.S. overall (15% higher than the same week in 2019, for both) than it was in Silicon Valley (+9% YoY). The Silicon Valley peak was also one week ahead of the state and nationwide peak (week ending on March 11, compared to the week ending March 18), likely due to the region’s early shelter-in-place orders.

The share of consumer spending in Grocery, General Merchandise, and Hobbies and Toys occurred but has since come back down, while Specialty Food and Beverage Sales have experienced a sustained increase in share. 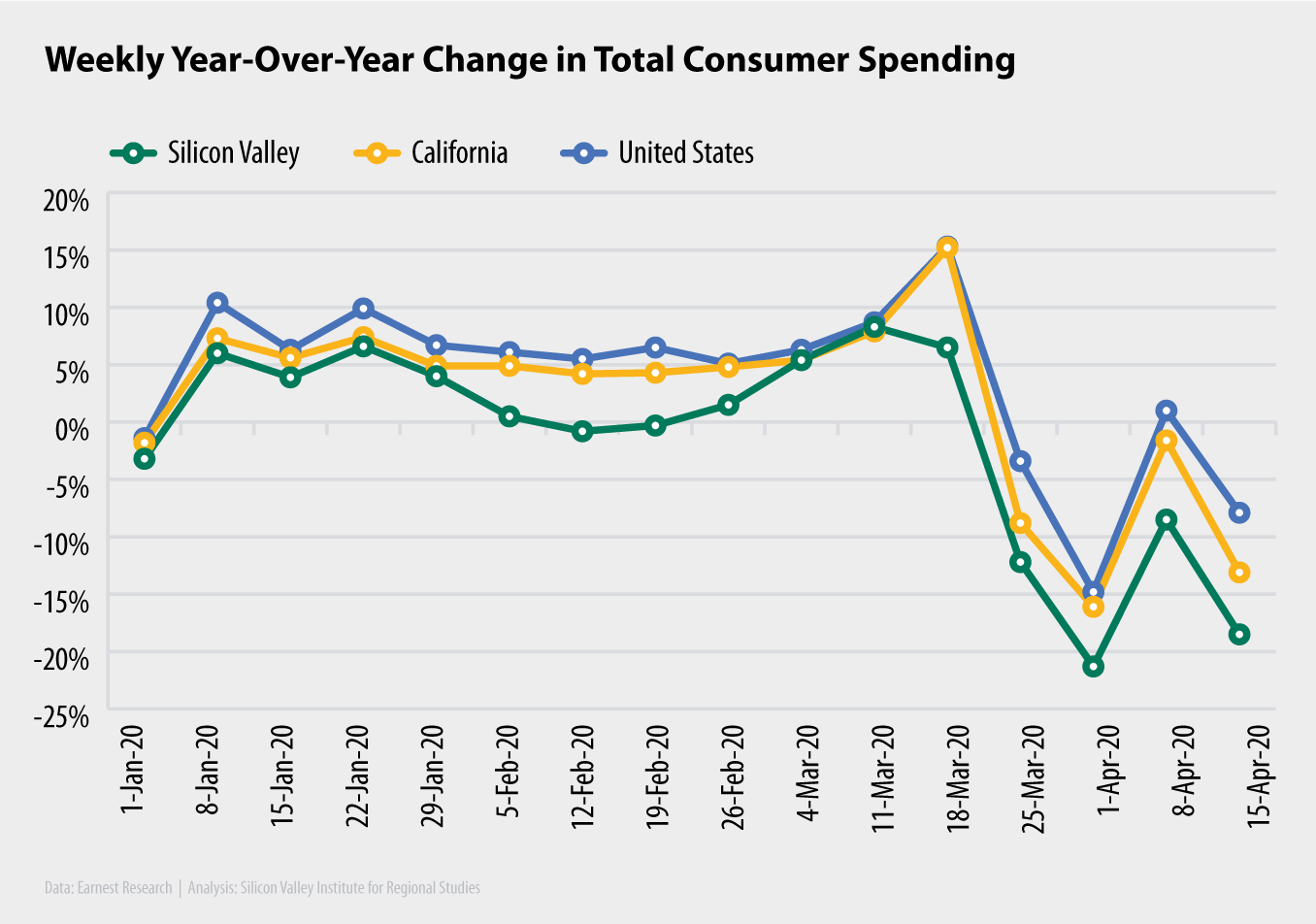 2. Purchasing shifted from in-store to online

3. Consumers are spending their money on different things now 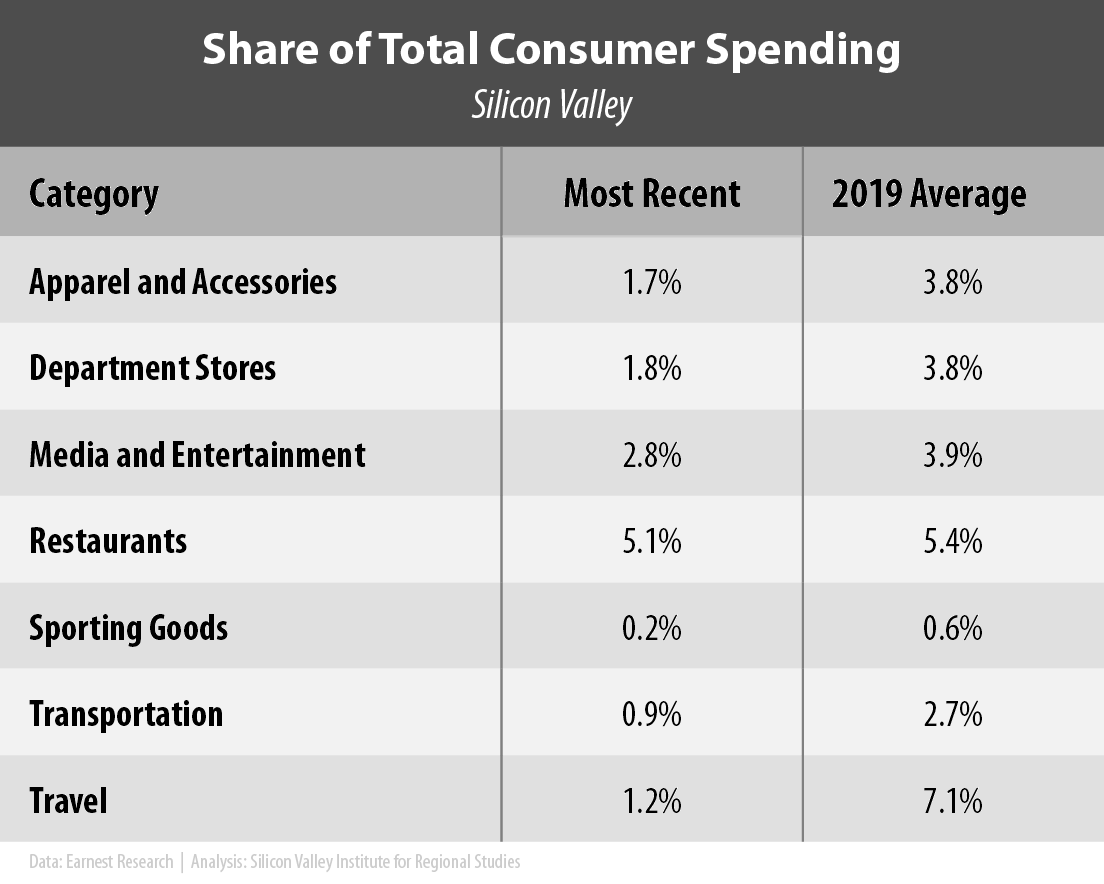 Consumer spending at grocery stores peaked during the week ending March 18, reaching 27% of all spending; as of the most recent data, grocery spending represents 23%.

While the share of consumer spending at Restaurants did not show a significant decline in the recent data (-0.2 percentage points lower than the 2019 average), the total amount in the most recent data was significantly lower than that of the same week in 2019. Restaurant sales began to decline at the beginning of March, and reached a low of -40% below the prior year by March 25; as of the most recent data, restaurant sales are still down by 25% compared to 2019. Among restaurant subcategories, Casual Dining has been the hardest hit (-68%), then Quick Service Restaurants (-47%) and Fast Casual (-31%). 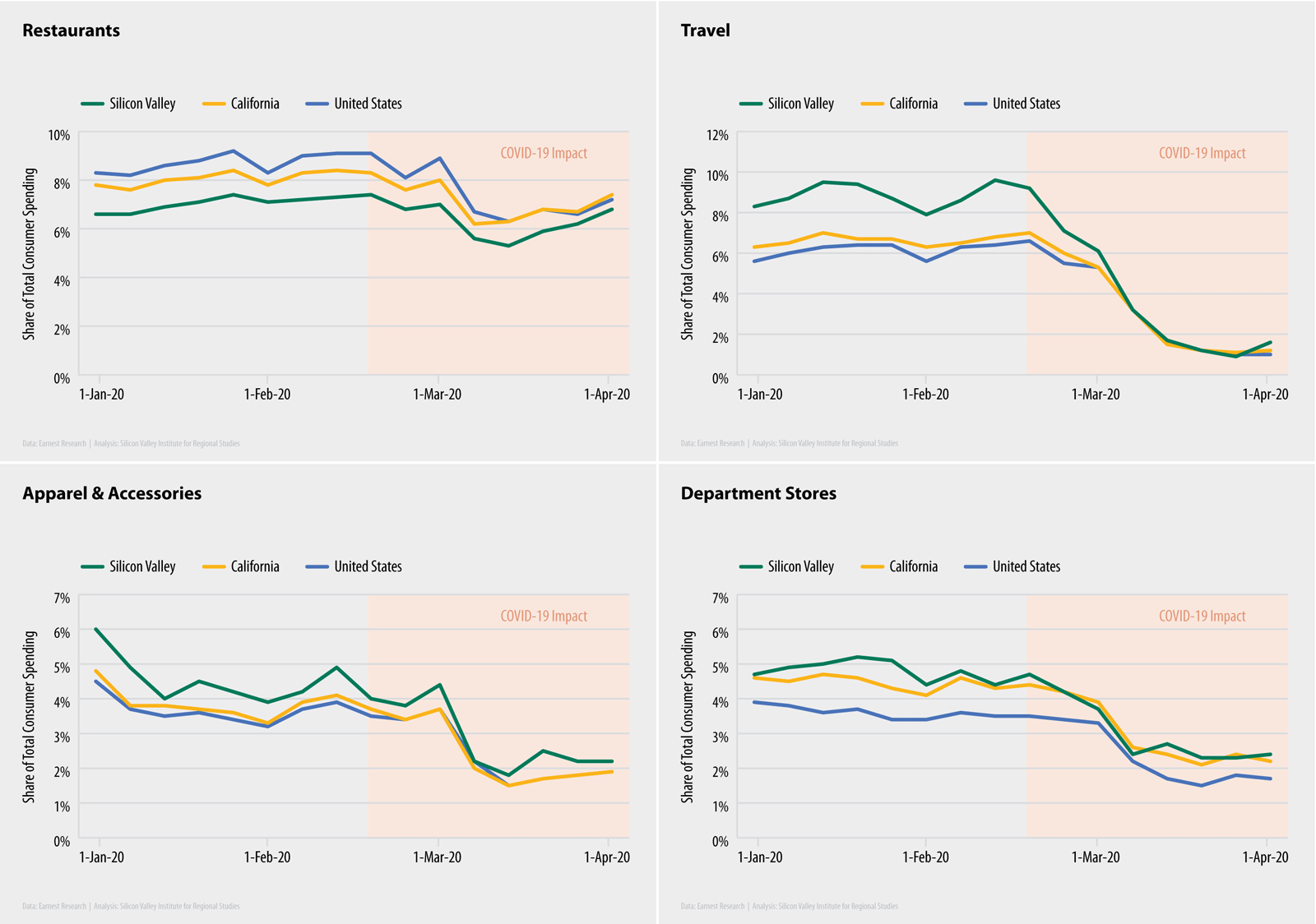 In addition to these categories representing a declining share of overall consumer spending in Silicon Valley, spending totals (as of the most recent data) are significantly lower than what they were during the same week last year.

4. Based on the most recent Earnest Research data, overall consumer spending in Silicon Valley is 18% lower than the same week last year. This compares to -13% and -8% lower than last year in California and the United States overall, respectively. The declines are driven primarily by less in-store purchasing activity. 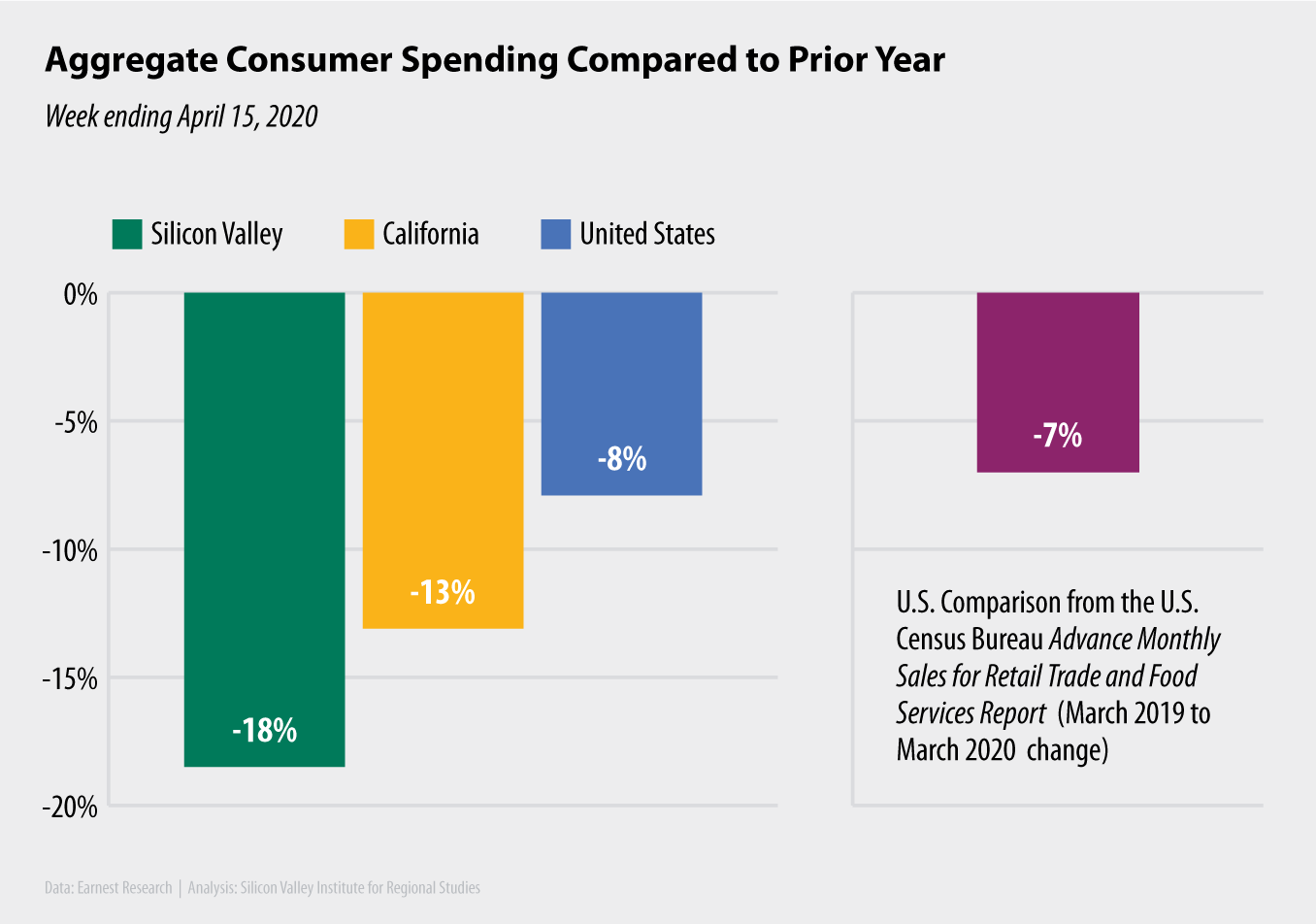 5. Online consumer spending in Silicon Valley tracks fairly closely with the General Merchandise subcategory of General Merchandise – particularly over the past few weeks – which includes purchases from places like Amazon, Etsy, Walmart, and Target; this suggests that those types of retailers may dominate online purchasing. 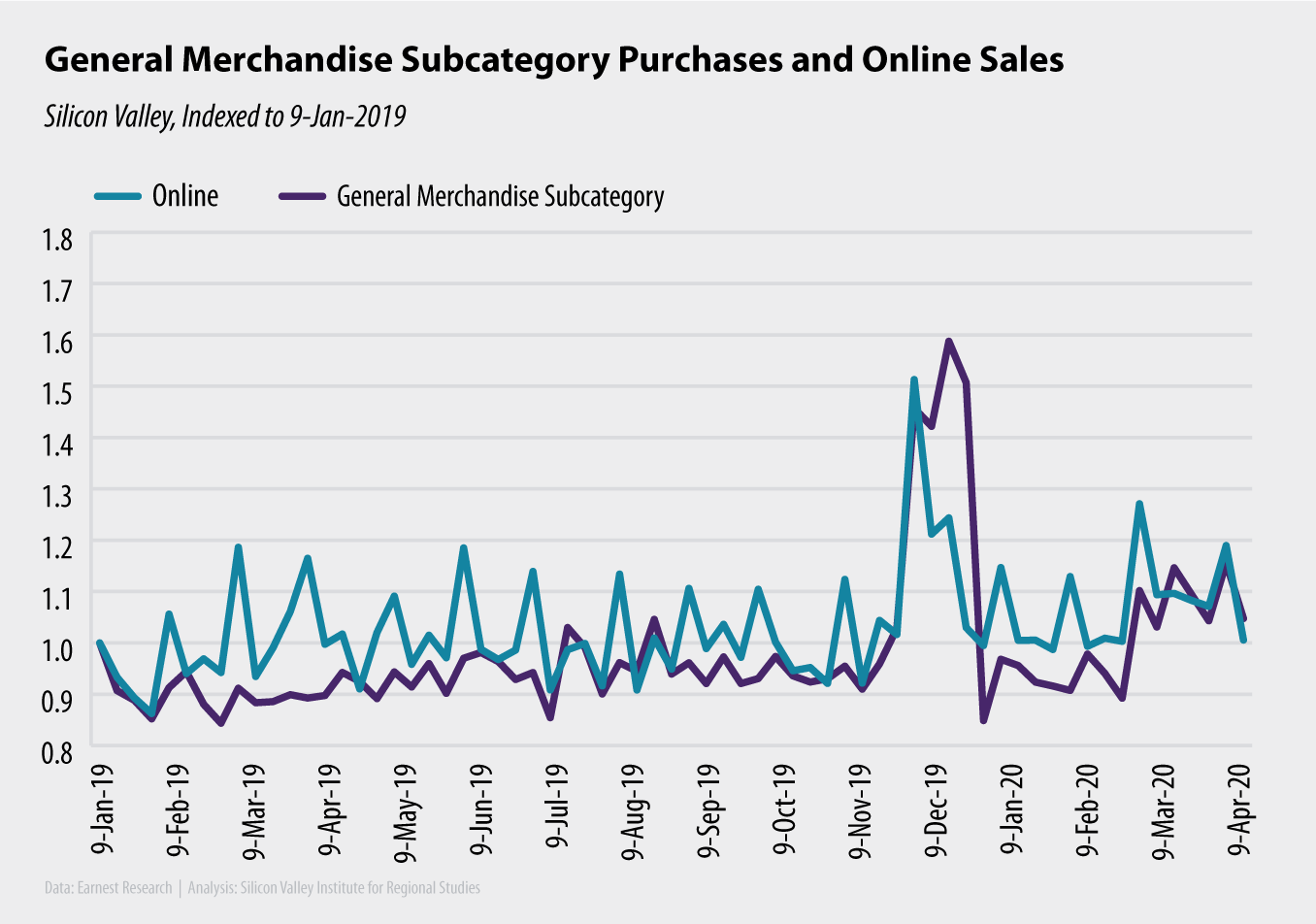 6. Based on the Earnest Research data, overall in-store consumer spending declined by an average of 32% (average of the four weeks post shelter-in-place orders) post COVID-19 impact. If this trend were to persist post-pandemic, then Silicon Valley could lose as many as 8,560 jobs across retail, accommodation, and food services.2

In addition to the Earnest Research data, the Institute also examined data from the U.S. Census Bureau Advance Monthly Sales for Retail Trade and Food Services Report and found that in the United States, overall unadjusted7 retail sales revenues remained relatively steady between February and March, with increases in non-store retailers and declines in other areas.

Month-over-month changes (unadjusted for seasonal variations) were as follows:

With the broad assumptions that gains in e-commerce persist post pandemic, the declines in storefront retailers persist, and grocery sales, restaurant revenue, and gasoline sales go back to a pre-pandemic “normal” there would be a 4.6% decline in retail and food service sales over a one-year period. If these broad assumptions were true and national trends were mirrored here, Silicon Valley could lose as many as 12,150 jobs across retail in the year post-pandemic if the transition away from brick-and-mortar stores to more e-commerce continues.2