May 15, 2020 – Joint Venture Silicon Valley’s Institute for Regional Studies has compiled a summary of the San Francisco-Oakland-Hayward metro area consumer price index (CPI) which was released by the U.S. Bureau of Labor Statistics on May 12. Looking back to 1978, the two-month period percentage decline in the Index shows that the COVID-19 pandemic has brought about a decrease of 0.5 percent. No declines between April and February have occurred since 2003, and none of this magnitude since 1986.

The Institute’s summary illustrates that the CPI – a measure of the price of a “market basket” of goods and services such as food, energy, transportation, and housing – fell for the first time since 2003 in the February to April period.

“While the CPI typically tends to decline toward the end of the year as part of the normal seasonal pattern, it rarely falls during the February through April period,” said Rachel Massaro, the Institute’s Director of Research. “Yet due to the impacts of the pandemic and related economic shutdowns, consumer prices over the past couple months have been subject to some very unique and unprecedented circumstances.”

“In 2003, the decline in prices was likely caused by the dot-com bust which led to out-migration, in turn leading to decreased consumer demand and reduced buying power,” said Russell Hancock, President and CEO of Joint Venture.

The year-over-year increase in April to April Bay Area CPI averaged 3.89% per year over the past 40 years; this April, the year-over-year increase was 1.1%, much lower than normal but still positive. In contrast, the February through April percent change was negative, showing a half a percent decline. This decline was highly influenced by the fall in gasoline prices (-16% since February) and was also subject to declines in the price of apparel (-12%) and dining out, which was down 2% over the two-month period.

Some Bay Area prices that rose since February included Food (+1.6%) – particularly Meat, Poultry, Fish, and Eggs (+10.4%) – as well as Utility (Piped) Gas Service (+12.5%). Food prices in the Bay Area were up 4.4% year-over-year. The decline in the Bay Area’s February to April consumer price index is slightly less pronounced than the national decline (-0.9%); the California CPI for April has not yet been released. 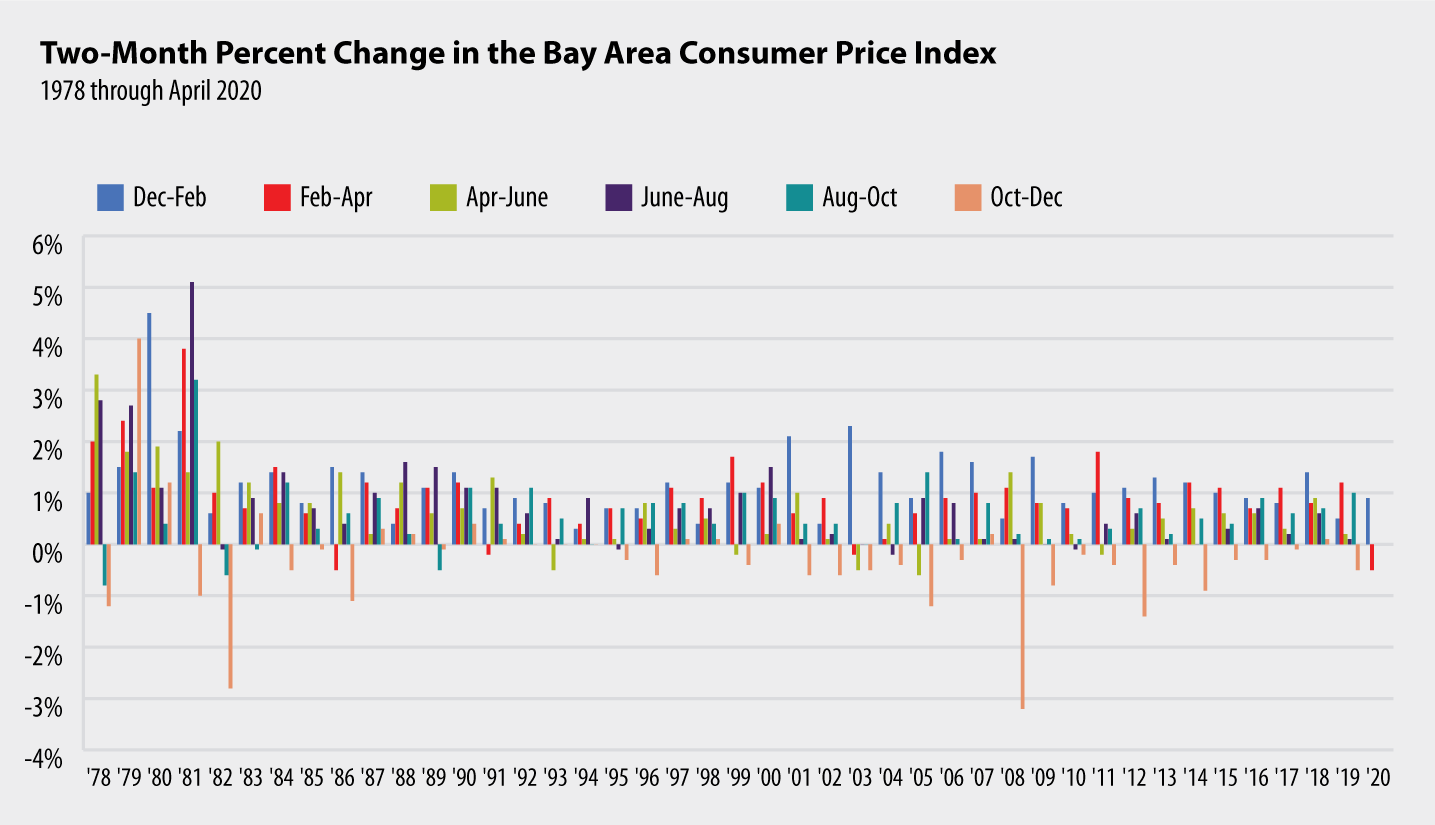 Data are from the U.S. Bureau of Labor Statistics, CPI for All Urban Consumers in the San Francisco-Oakland-Hayward metropolitan area, including Alameda, Contra Costa, Marin, San Francisco, and San Mateo Counties (not seasonally-adjusted, base period 1982-1984=100, Series ID CUURS49BSA0). Note from the Bureau of Labor Statistics: “Coronavirus (COVID-19) Pandemic Impact on April 2020 Consumer Price Index Data. Data collection by personal visit for the Consumer Price Index (CPI) program has been suspended since March 16, 2020. When possible, data normally collected by personal visit were collected either online or by phone. Additionally, data collection in April was affected by the temporary closing or limited operations of certain types of establishments. These factors resulted in an increase in the number of prices considered temporarily unavailable and imputed. While the CPI program attempted to collect as much data as possible, many indexes are based on smaller amounts of collected prices than usual, and a small number of indexes that are normally published were not published this month.”