Silicon Valley’s unemployment rate soared higher in April than during any other period on record.

“These unemployment numbers are astounding, though not surprising given the global health crisis we’re facing and shutdowns on all nonessential businesses since mid-March,” said Rachel Massaro, the Institute’s Director of Research. “We’ve just never seen numbers like this before. To think of more than a hundred and sixty thousand Silicon Valley residents out of work is absolutely mind-boggling. It’s also even more stark in the context of how many residents were struggling to make ends meet even before the pandemic, with nearly a third of all households that were unable to meet their basic needs without assistance.”

“Losses are affecting those at the lower income levels disproportionately, such as those in service industries and other hands-on and face-to-face jobs. Those people are more likely to be renters, and nearly a quarter of all renters in Silicon Valley pre-pandemic were severely burdened by housing costs, spending more than half of their gross income on rent,” said Massaro.

Statewide, the most impacted industries by the total number of payroll jobs lost in April were Leisure and Hospitality (-44% month-over-month, with more than double the number of losses of any other industry); Trade, Transportation, and Utilities (-13%); Education and Health Services (-10%); and Professional and Business Services (-9%).

Among the state’s 58 counties, Santa Clara County ranked the 4th lowest in terms of unemployment rate; San Mateo County lost the #1 ranking in April and moved to #2 (behind Marin County). The highest unemployment rate in the Bay Area was Napa County, at 15.9%; the highest in the state was Imperial County, at 28.0%.

A recent Institute report on layoffs reported through the California WARN Act indicated that 85% of WARN-reported layoffs were classified as temporary; those layoffs, however, were not comprehensive as they only included “covered establishments” and layoffs that affected more than 50 people in a 30-day period; additionally, the notice requirements for those establishments were temporarily suspended through a March 4 Executive Order. A national study by the Becker Friedman Institute for Economics at the University of Chicago released on May 5 similarly determined that a majority of recent layoffs (58%) are likely to be temporary.

“The majority of Silicon Valley’s unemployed workers have been either temporarily laid off or furloughed, so we have reason to believe many will go back to work as economic restrictions are lifted,” said Massaro. “Notwithstanding the duration of their unemployment, though, those without jobs are facing a great deal of economic uncertainty at the moment, in addition to loss of critical benefits like health insurance.” 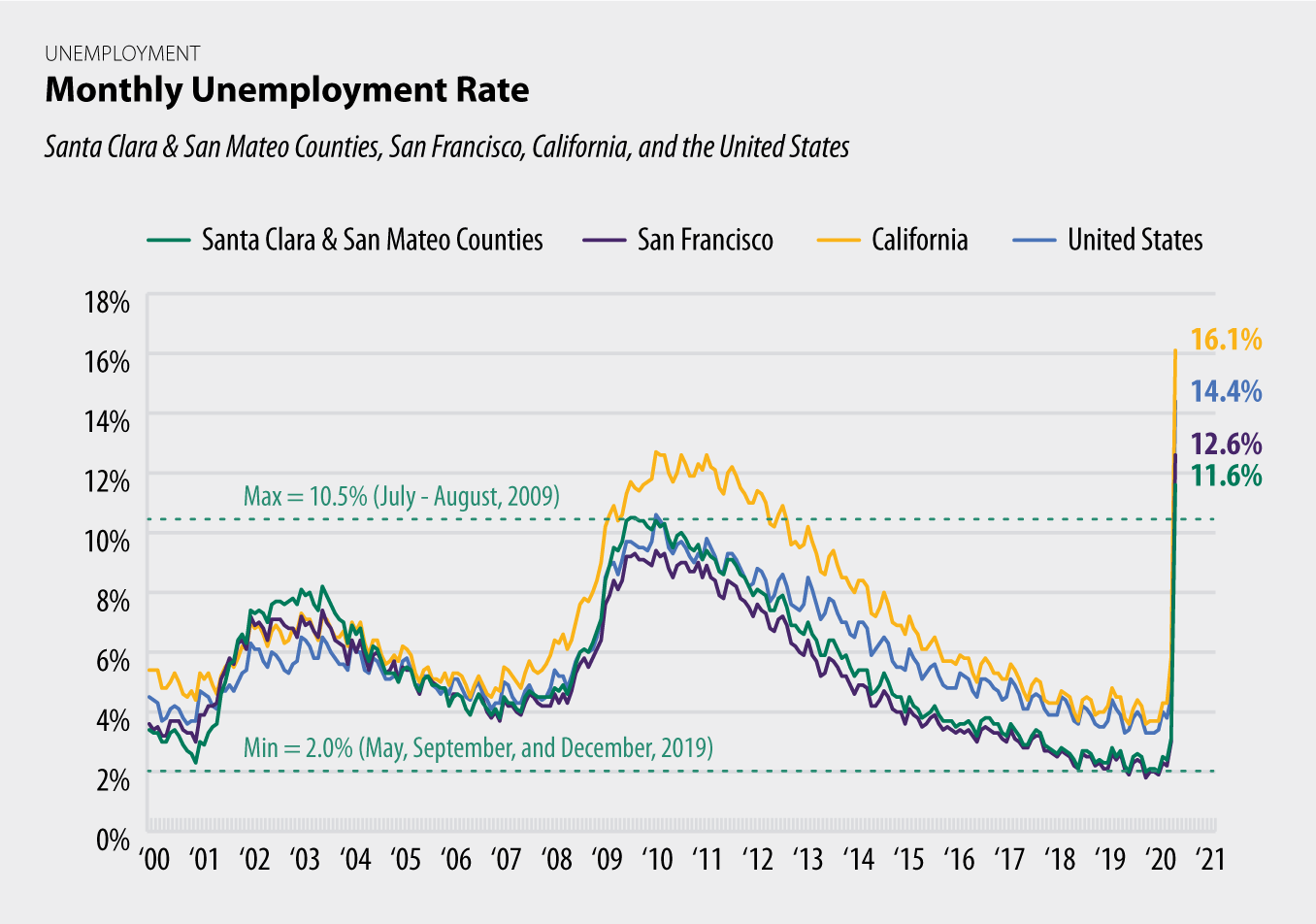 Monthly unemployment rates are calculated using employment and labor force data from the Bureau of Labor Statistics, Current Population Statistics (CPS) and the Local Area Unemployment Statistics (LAUS). Rates are not seasonally adjusted. County-level and California data for April 2020 are preliminary, and are from the California Employment Development Department May 22 release.