July 7, 2020 - Joint Venture’s Silicon Valley Institute for Regional Studies has determined that as of June, the region’s COVID-19 response funds topped $66 million, a figure that is more than 17 percent over typical annual funding from local foundations. The Institute has compiled a table of 19 regional response funds in Silicon Valley with a range of focus areas, including housing needs, community-based nonprofits, small businesses, childcare providers, schools, and the needs of low-income individuals throughout the region.

Of the approximately $66.1 million raised through the regional response funds, $58.1 million (88 percent) has already been distributed as of June. This total amount of funding raised through the regional response funds alone represents (for the purposes of representing relative magnitude) approximately 17 percent of all estimated local foundation funding to local Silicon Valley community-based organizations on an annual basis, based on 2017 data (see notes below the table). While it is not an apples-to-apples comparison – as the pandemic relief is going to businesses and individuals in addition to community-based organizations, and comes from sources other than local foundations alone – it illustrates how significant this amount of funding is in response to the pandemic. Historically, the region’s community-based organizations have struggled to maintain adequate funding,[a] which is particularly salient in a region with as much wealth as Silicon Valley.

The majority of the COVID-19 response funds are being distributed through grants;

some are disbursed through microfinance loans.

Between the start of the COVID-19 crisis in March and the month of June, the regional response funds included in this analysis have raised $66.1 million. This total includes seed and additional funding of more than $18 million from Silicon Valley companies and foundations such as Genentech, the Heising-Simons Foundation, Google, LinkedIn, the Morgan Family Foundation, and dozens of others (see partial list in notes, below), in addition to allocations from the foundations that are managing the funds themselves, local municipalities, and counties.

In addition to the more than $66 million in these 19 funds, there has been approximately $45 million (as a minimum estimate) committed by numerous individual foundations and donors for COVID-19 response directed, at least in part, to Silicon Valley recipients, and through allocations by Silicon Valley municipalities. These contributions have been provided, to some extent, to regional response funds as well as through direct grants to new and existing grantees. Many of these funders have pledged additional support in subsequent rounds. In addition, Facebook has created its own Small Business Grants Program with $100 million in cash grants for businesses, “in or near a location where Facebook operates.”[b]

“Businesses, nonprofits, and individuals in Silicon Valley – as in almost every other region across the country – are in dire need of support during this crisis. After examining the amounts allocated by our regional response funds and all the additional money pouring into COVID-19 response, I think it’s safe to say we’re a very lucky region given the circumstances,” said Rachel Massaro, the Institute’s Director of Research. Massaro added, “As fortunate as we are for this generous philanthropic support, the region was facing significant income and wealth inequality prior to the pandemic, with 660,000 individuals unable to meet their basic needs without assistance, nearly 200,000 of whom were living at or below poverty. Viewed through that lens, even if a hundred million dollars was distributed directly to those individuals, they would only receive a few hundred each; they’d need about ten times that amount to cover just one month’s rent.”

Russell Hancock, Institute President and Joint Venture CEO, said, “Few regions, if any, have this kind of concentration of wealth in the business and philanthropic community, able to turn on a dime and respond so rapidly with multi-million-dollar commitments. At this time of crisis, the support is palpable, and funding is being distributed in impactful ways with the shortest possible turnaround times.”

** Silicon Valley, for the purposes of this report, includes Santa Clara and San Mateo Counties.** 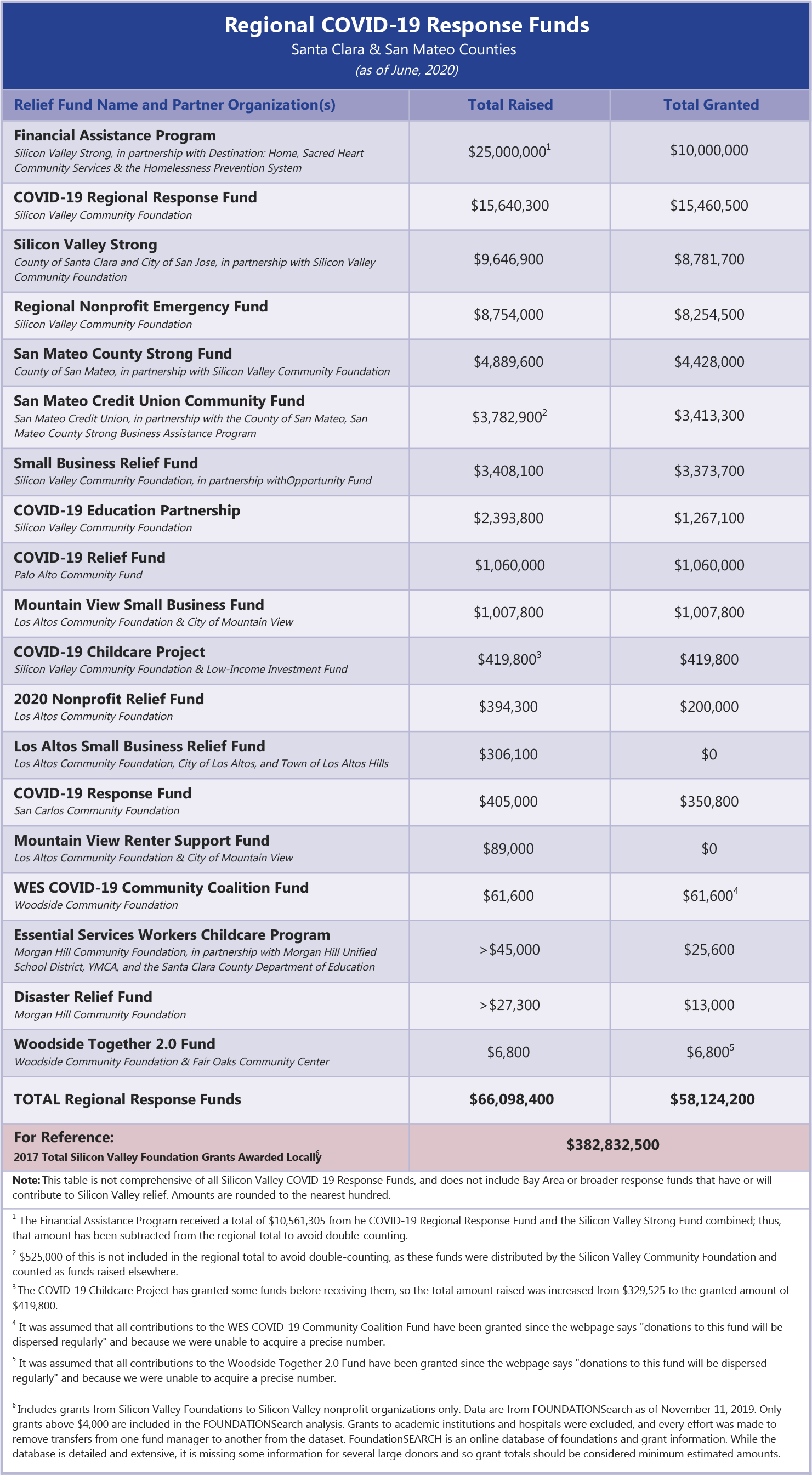 Table does not include Bay Area or broader response funds that have or will contribute to Silicon Valley relief, such as those from the United Way Bay Area COVID19 Community Relief Fund and others. Some of the funds distribute grants to nearby counties in addition to San Mateo and Santa Clara, such as San Francisco and Alameda Counties. The total contributions from individual donors and foundations not otherwise noted were estimated from a collection of self-reported information by Magnify Community through May 2020, accessed 6/22/2020. These donations – some or all of which went to the regional response funds – include those from: the 1440 Foundation/1440 Multiversity, the Applied Materials Foundation/Applied Materials, the Castellano Family Foundation, the Chan Zuckerberg Initiative, the David and Lucile Packard Foundation, the Grove Foundation, the Health Trust, the Heising-Simons Foundation, the Knight Foundation, the Leo M. Shortino Family Foundation, the Peery Foundation, the Pinpoint Foundation, the Sand Hill Foundation, the Sobrato Family Foundation, Sunlight Giving, and VMC Foundation. Foundation giving for 2017 includes grants from Silicon Valley Foundations to Silicon Valley nonprofit organizations only, and are from FOUNDATIONSearch as of November 11, 2019. Only grants above $4,000 are included in the FOUNDATIONSearch analysis. Grants to academic institutions and hospitals were excluded, and every effort was made to remove transfers from one fund manager to another from the dataset. FoundationSEARCH is an online database of foundations and grant information. While the database is detailed and extensive, it is missing some information for several large donors and so grant totals should be considered minimum estimated amounts. Silicon Valley Strong fundraising goes toward the Silicon Valley Strong Fund, the Silicon Valley Community Foundation COVID-19 Regional Response Fund designated for Santa Clara County, the Silicon Valley Community Foundation COVID-19 Nonprofit Regional Emergency Fund designated for Santa Clara County, and direct commitments to Destination:Home. Companies and foundations that donated to the regional response funds include, but are not limited to: Adobe, AMD, HP Foundation, Apple, Bank of America, Brandenburg Family Foundation, Broadcom, Cisco, David & Lucile Packard Foundation, eBay, Facebook, Genentech, Google, Heising-Simons Foundation, Hewlett Packard Enterprise, Housing Trust of Silicon Valley, Infosys, Intel, LinkedIn, Marvell, Micron, Morgan Family Foundation, PayPal, Samsung, Silver Lake, Western Digital, Xilinx, and Zoom. The Mountain View Small Business Fund received an additional $50,000 that was not included in the total amount because it was earmarked for marketing purposes (not to be disbursed through grants). The Financial Assistance Program received a total of $10,561,305 from the COVID-19 Regional Response Fund and the Silicon Valley Strong Fund combined; thus, that amount has been subtracted from the regional total to avoid double-counting. It was assumed that all contributions to the Woodside Community Foundation funds have been granted based on language posted to the website, and because we were unable to acquire precise numbers.