July 17, 2020 – Joint Venture Silicon Valley’s Institute for Regional Studies today released an analysis of post-COVID unemployment rates compared to 20 years of pre-COVID historical data. The numbers reflect a minimal decrease of 0.3 percentage points in the regional unemployment rate from the May rate of 11 percent, and only 0.6 percentage points below the unprecedented 11.6 percent in April, which surpassed even the post-dot com bust and recession highs of 2009.

Following today’s release of preliminary June 2020 labor market data from the U.S. Bureau of Labor Statistics (BLS) via the California Employment Development Department (EDD), the Institute for Regional Studies compiled a chart that illustrates a slight decline from the unprecedented April rates for Silicon Valley (including Santa Clara and San Mateo Counties), plus San Francisco, California, and the United States.

Silicon Valley’s unemployment rate was 2.4 percent in February – only moderately above the 2019 low of 2.0 percent; it rose slightly to 3.1 percent in March reflecting the earliest effects of the pandemic, soared to 11.6 percent in April before declining to 11.0 percent in May and 10.7 percent in June; however, there are some methodological caveats regarding data collection and classification that may be masking real unemployment changes. Additionally, the frequency at which the region’s economic reopening is shifting lends to intramonthly variations not captured in the mid-month unemployment data.

…there are some methodological caveats regarding data collection and classification that may be masking real unemployment changes.

“Silicon Valley’s tech workers, for the most part, had a smooth transition to remote work and have kept their jobs. At the same time, those working in retail and restaurants and other face-to-face jobs remain largely unemployed,” said Russell Hancock, president and CEO of Joint Venture Silicon Valley. “The unemployment rate came down slightly in June – that’s a good thing – but what happens next will be almost entirely dependent on how quickly those establishments are able to re-open.”

Between May and June, approximately 558,200 nonfarm jobs were added in California, with 44,500 (eight percent) in Silicon Valley. As of May, Silicon Valley claimants represented six percent of the state total. Among the 558,200 nonfarm jobs added in June statewide, the industries with the highest month-over-month percent growth were Leisure and Hospitality (up 26 percent month-over-month) and Trade, Transportation and Utilities (up four percent).

Many workers returning to their jobs this summer are facing reduced work hours, also referred to as underemployment. Nationally, according to the July 2 BLS release, “The number of persons employed part time for economic reasons declined... in June but is still more than double its February level.” Additionally, there are some major caveats to the recent U.S. Bureau of Labor Statistics (BLS) employment data releases on both the local and national levels. The national unemployment rate for June – which was released on Thursday, July 2 – indicated an 11.2 percent unemployment rate, with the BLS release attributing the rate decline to “the continued resumption of economic activity that had been curtailed in March and April due to the coronavirus (COVID-19) pandemic and efforts to contain it.”

The Silicon Valley unemployment rate, like the national rate, was affected by changes in interview methodology due to the pandemic including remote data collection. The methodological caveats include:

As stated in last month’s (June 19) BLS release, “the household survey estimates of employed and unemployed people that serve as the primary inputs to the state models were affected to varying degrees by the misclassification, which in turn affected the official LAUS [Local Area Unemployment Statistics] estimates for May 2020.” The same is presumably true for the June data, although it was not specifically mentioned in the July 2 release.

“While the unemployment rate has never been a leading economic indicator, per se, it’s become both a lagging indicator and one that’s too intermittent to effectively illustrate the massive changes in employment levels on a daily basis” said the Institute’s Director of Research, Rachel Massaro. “Since the onset of the pandemic, the unemployment rate has provided us with a relatively outdated and retrospective snapshot in time. The frequency at which the economic reopening and the health crisis are changing is just too high to be captured in a mid-month, survey-based estimate. That said, it at least gives us a sense of the relative magnitude of unemployed workers.”

Among the state’s 58 counties, Santa Clara County rankedthe sixthlowest in terms of unemployment rate; San Mateo County, which lost the number one ranking in April and moved to number two, fell to seventh in May and remained there in June. The highest unemployment rate in the BayArea was Solano County, at 13.7 percent; the highest in the state was Imperial County, at 27.3 percent.

As was announced by the California EDD on July 16, statewide benefit payments across all unemployment programs since mid-March – including the $600 per week stimulus payments, Pandemic Unemployment Assistance (PUA), and Pandemic Emergency Unemployment Compensation paid by the federal government – have reached $45.6 billion, twice as much as the height of the Great Recession in 2010. This total was distributed among 8.3 million new and existing (extension) claimants, representing nearly 20 percent of all unemployment insurance claims reported nationally and 15 percent of the PUA claims. Among California counties, the largest shares of benefit payments have gone to southern California, with nearly $2.2 billion to Los Angeles County alone in January through May. Excluding those southern California counties, Santa Clara and Alameda Counties received the most benefits through May, at $380 million and $358 million, respectively.

Those unemployed workers that typically work full-time and earn a minimum wage – either at the statewide minimum wage rate of $12-13 per hour, or a higher local minimum wage rate of as much as $16.05 per hour[1] – that are receiving both statewide unemployment insurance (UI) benefits in addition to the CARES Act $600 per week are now receiving more on a weekly basis than when they were employed. At $16.05 per hour (the highest minimum wage rate in Silicon Valley, by local ordinance in both Mountain View and Sunnyvale), a full-time employee would typically receive $642 per week; in contrast, their statewide unemployment insurance benefit would be $321 per week which, in addition to the federal PUA of $600 per week for a total of $921 weekly – 43 percent more than their typical earnings. Likewise, at the statewide $12 per hour minimum wage rate, someone receiving both PUA and UI would receive $600 plus $240 per week, for a total of $840 compared to their usual $480 per week – amounting to a 75 percent increase. While not all minimum wage workers are currently unemployed or receiving UI/PUA benefits, Santa Clara and San Mateo Counties combined have nearly 443,000 workers that typically earn a minimum wage and work full-time (including 333,000 people at $12 per hour, and 110,000 earning between $12 and $16.05 hourly).

Massaro noted that “those minimum wage workers who are unemployed right now and are receiving both state unemployment insurance and federal pandemic unemployment assistance are the lucky few – they’re making more money now than they were when they were working full-time. What they may not know, though, is that the six hundred in PUA is set to expire at the end of the month, and all those payments are taxable income. Without some caution, they could be hit with an unexpected tax bill at the end of the year.” 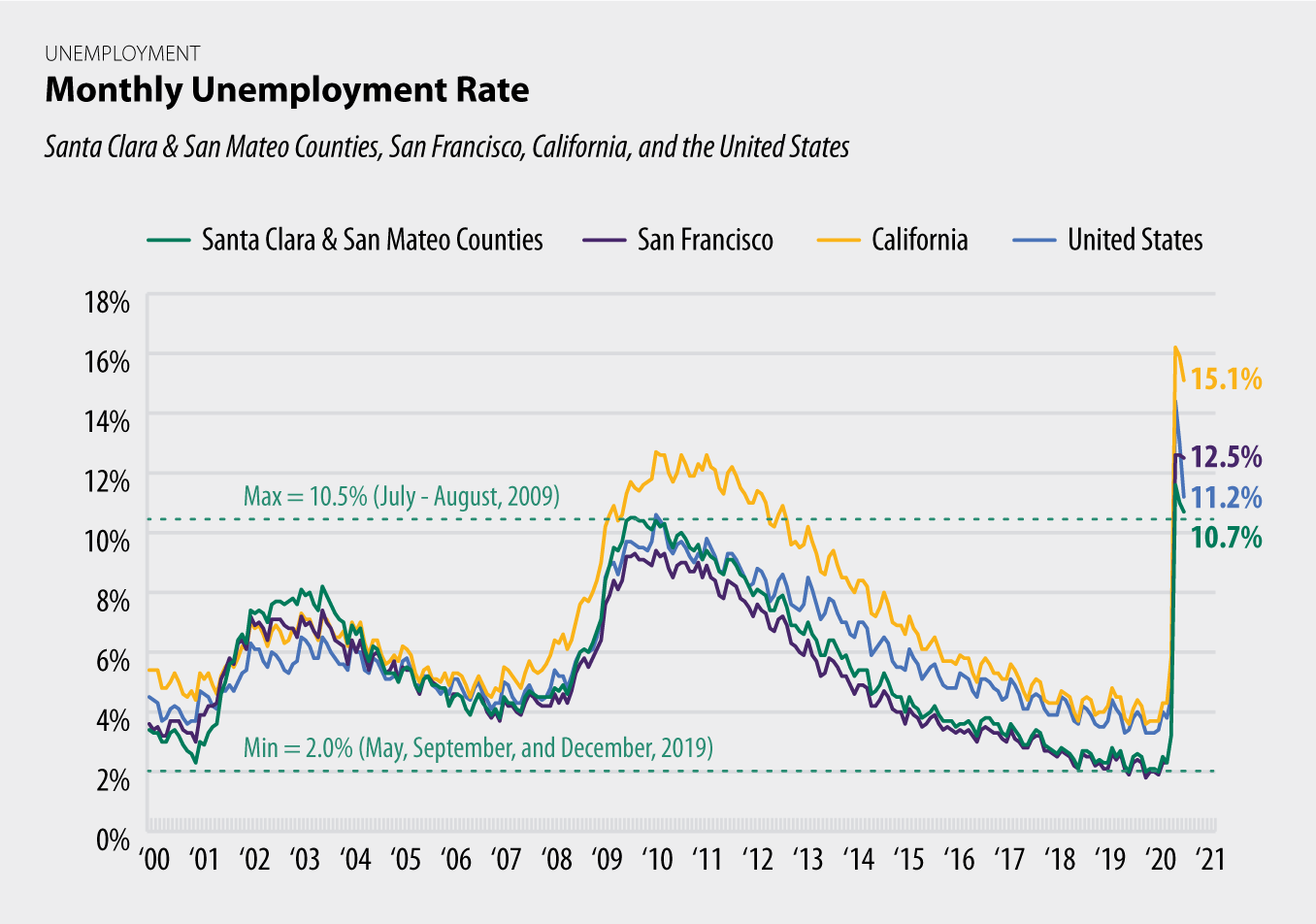 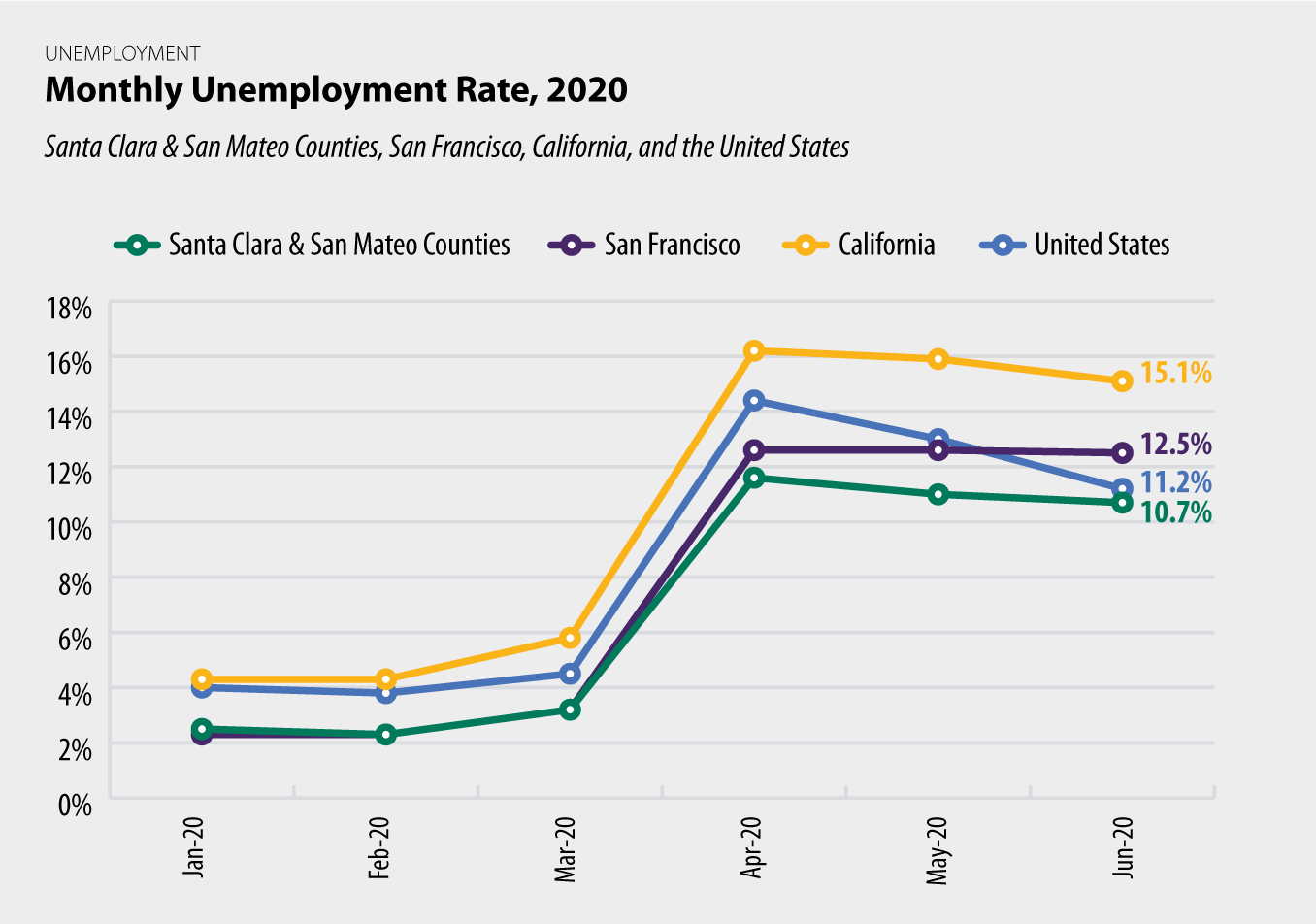 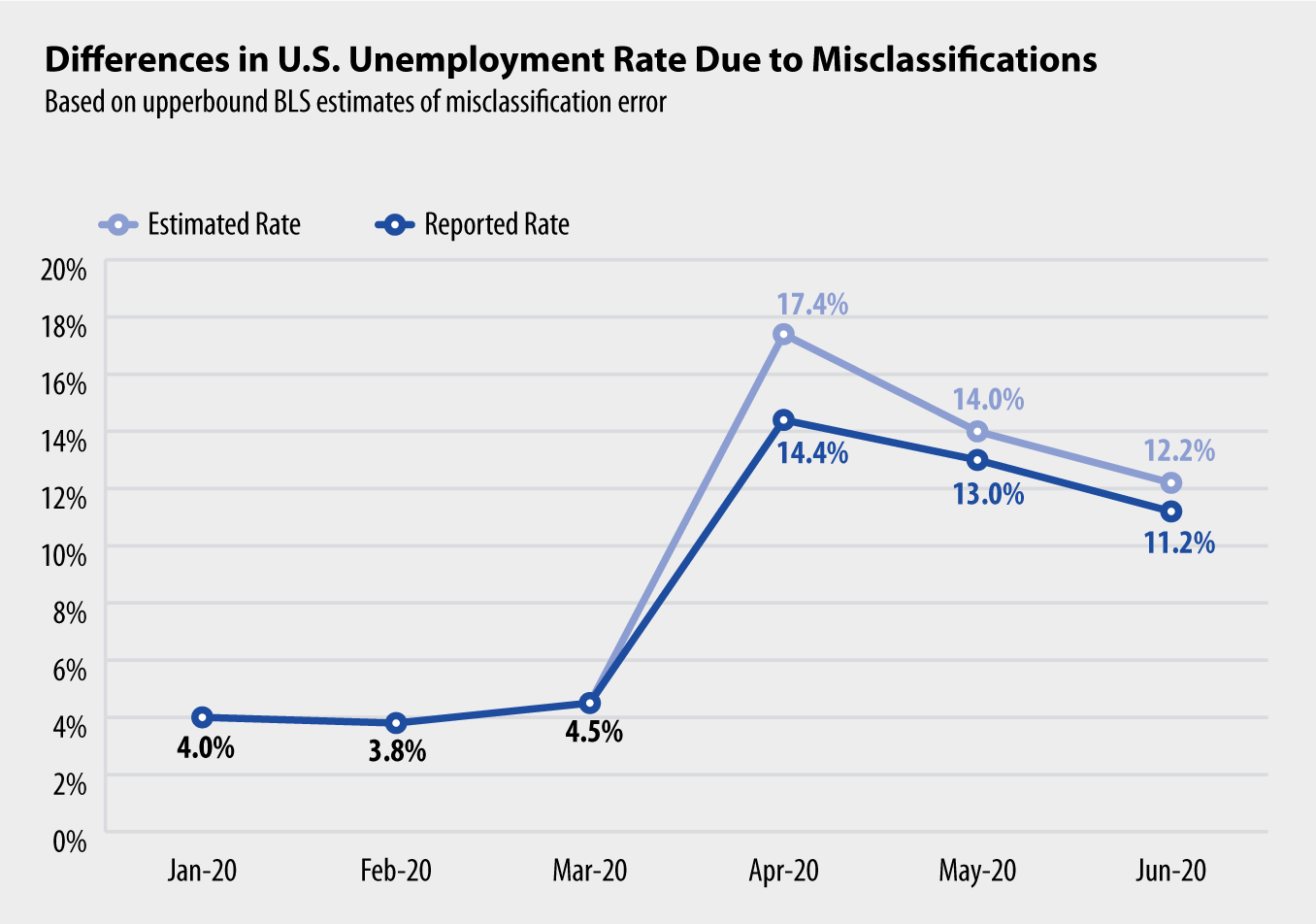 Monthly unemployment rates are calculated using employment and labor force data from the Bureau of Labor Statistics, Current Population Statistics (CPS) and the Local Area Unemployment Statistics (LAUS). Rates are not seasonally adjusted. County-level and California data for June 2020 are preliminary, and are from the California Employment Development Department July 17.