In aggregate, market cap is up by 11% since February 19

October 6, 2020 – Analysis reveals that the market cap of Silicon Valley and San Francisco stocks, in aggregate, are now 11 percent and seven percent higher, respectively, than prior to the pandemic-related decline. Joint Venture Silicon Valley’s Institute for Regional Studies examines how Silicon Valley and San Francisco’s publicly-traded companies have fared in the six months following the market’s lowest point on March 23. The analysis was conducted as an indicator of regional economic health, as opposed to market analyses focusing on the health of individual companies or interests of the stakeholder perspective.

The recovery of the region’s public company market cap is in contrast to the overall decline of 12 percent for the NYSE Composite, nine percent for the Dow Jones Industrial Average, and four percent for the S&P 500. The value of the Nasdaq Composite – which is driven, in large part, by Silicon Valley tech stocks – was up eight percent since pre-pandemic declines. Likewise, other tech-driven market indices such as the NYSE FANG+ and the BVP Nasdaq Emerging Cloud (EmCloud) Index were up since mid-February by 30 percent and 37 percent, respectively.

“The market performance of our public companies – in aggregate – is an indicator of regional economic health,” says Institute Director of Research, Rachel Massaro. “Those companies are not only significant contributors to the region’s GDP, but also serve as major employers and thus sources of income for our residents. Whether or not they’re faring well during this rough time has tangible impacts on our day-to-day lives.”

Stock market declines due to the COVID-19 crisis began across U.S. exchanges on February 20, 2020, and continued through the first market-wide trading halt since 19971 on March 9 (which was the first halt, or suspension of trading, of the “modernized” Market-Wide Circuit Breaker2) and subsequent trading halts.

Volatilities in the market began early in the year as a result of multiple factors, including trade worries amid the COVID-19 outbreak in China, worries about the spread of COVID-19 beyond China, and disagreement in Russian dealings with the Saudi Arabian oil market. The market reacted to the World Health Organization’s declaration of COVID-19 as a pandemic,3 President Trump’s declaration of impending limitations on international travel, and the announcement that the NBA postponed its season (which served as an indicator of the severity of the outbreak to the American public). The “Market-Wide Circuit Breaker” across U.S. exchanges was subsequently triggered on March 9, March 12, March 16, and March 18.4

The S&P 500, Dow Jones Industrial Average, NYSE Composite, and Nasdaq Composite all began repaid declines beginning on February 20, bottomed-out on March 23, and then began to rebound to some extent.5 In contrast, tech-driven market indices such as the NYSE FANG+ and BVP Nasdaq Emerging Cloud (EmCloud) Indices bottomed-out earlier (March 18 and 16, respectively) and began to rebound prior to March 23.

“This feels very reminiscent of the Great Recession recovery, in which Silicon Valley had a leg up – adding jobs back into the economy before other non-tech-centric regions.”

The Silicon Valley Institute for Regional Studies examined how the region’s companies have fared overall, including snapshots of total market cap immediately prior to this first pandemic-related trading halt (close on February 19), between the beginning of the decline and the low point on March 23, after the first month of recovery (April 23), and again at the six-month mark (September 23). The analysis included stock prices and changes in market cap for both Silicon Valley and San Francisco public companies (approximately 330 in total, with some slight change in composition between analyses due to new IPOs, mergers/acquisitions or other delistings).

Market data was obtained from IEX Cloud. Silicon Valley is Joint Venture’s city-defined region, including all of Santa Clara and San Mateo Counties, plus the cities of Fremont, Newark, Union City, and Scotts Valley.

The analysis revealed that the market cap of Silicon Valley and San Francisco stocks, in aggregate, are now 11 percent and seven percent higher, respectively, than prior to the pandemic-related decline (when total market cap equaled $7.63 trillion).

The +11 percent recovery of the region’s public company market cap is in contrast to the overall decline of -12 percent for the NYSE Composite, -9 percent for the Dow Jones Industrial Average, and -4 percent for the S&P 500. Major global market indices, such as the FTSE All-World, MSCI All Country World, and the S&P Global 1200 remained five to 21 percent below that of February 19 as of late September.

The value of the Nasdaq Composite – nearly 24 percent of which is accounted for by Facebook, Apple, Amazon, Microsoft, and Google combined6 – was up eight percent since pre-pandemic declines. Likewise, other tech-driven market indices such as the NYSE FANG+ and the BVP Nasdaq Emerging Cloud (EmCloud) Index were up since mid-February by 30 percent and 37 percent, respectively.

EmCloud includes 54 companies, 31 (57 percent) of which are headquartered in either Silicon Valley or San Francisco (such as Adobe, Box, DocuSign, Dropbox, PayPal, Proofpoint, Salesforce, ServiceNow, Slack, and Zoom).7 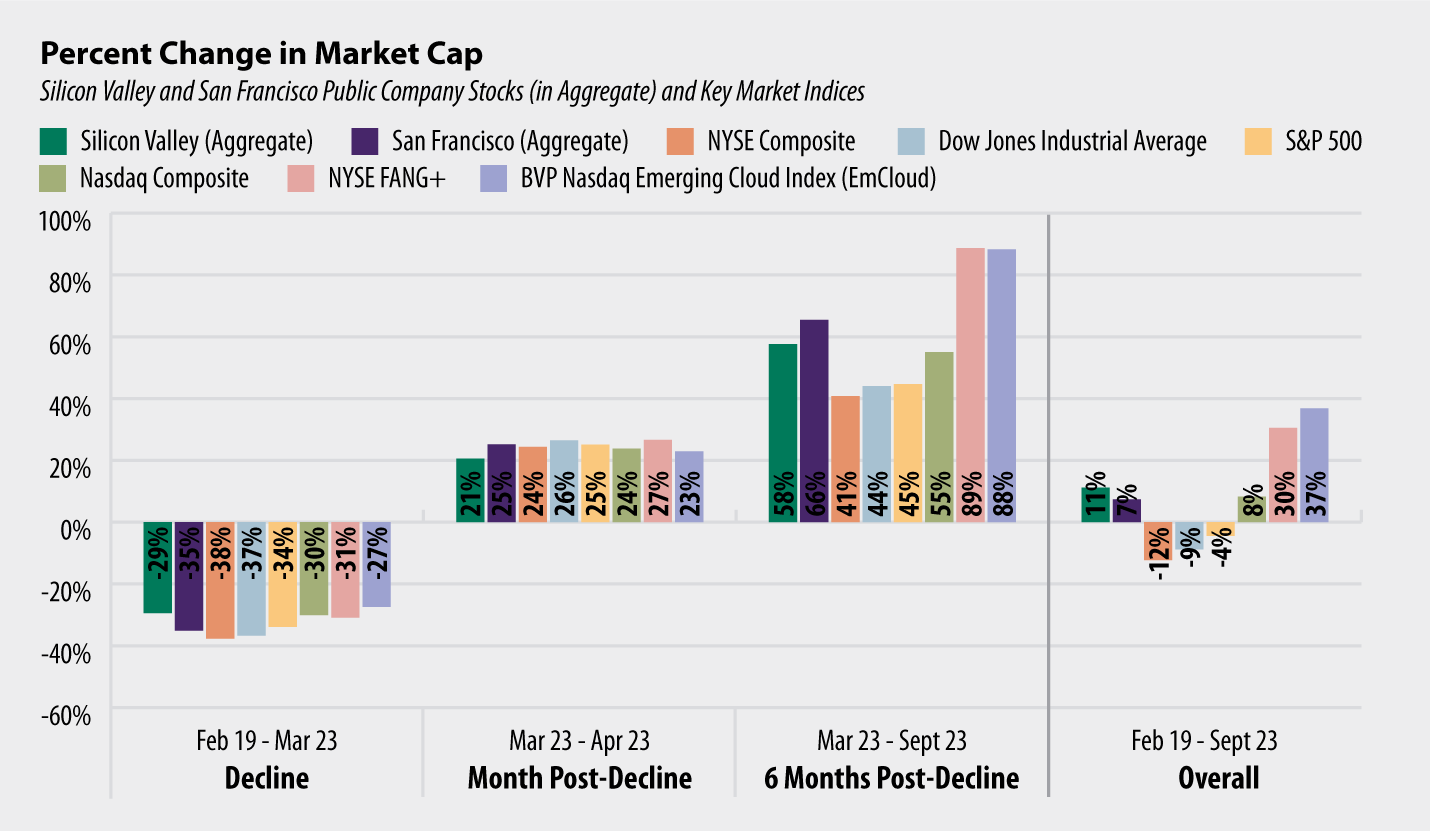 While the effect of earlier pandemics on financial markets is difficult to obtain, one analysis8 indicated that the S&P 500 fell by 24.7 percent in 1918 (the year of the Spanish Flu) then rose 8.9 percent the following year; the 1918 decline, however, was also influenced by World War I and so cannot be attributed to the pandemic alone. 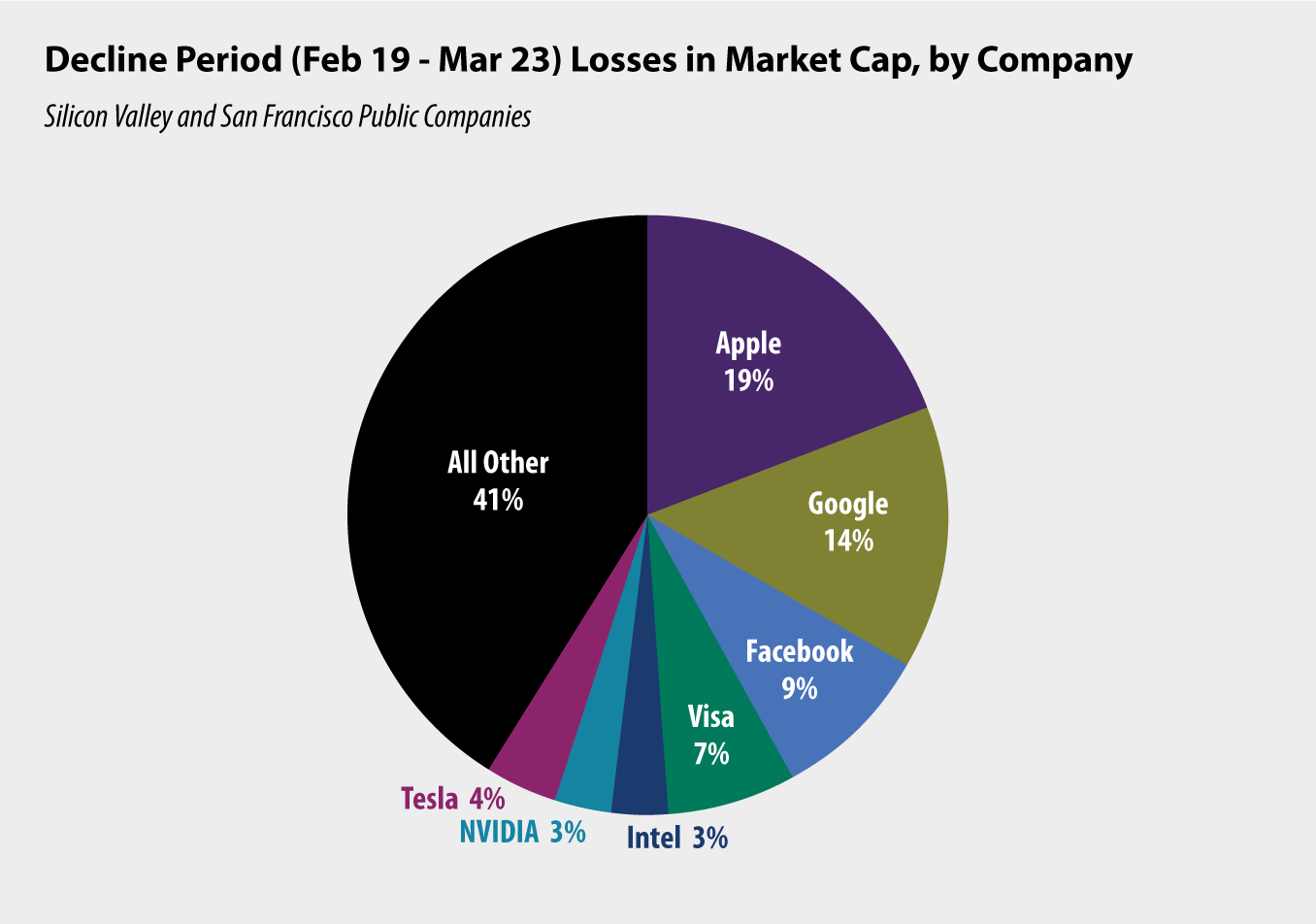 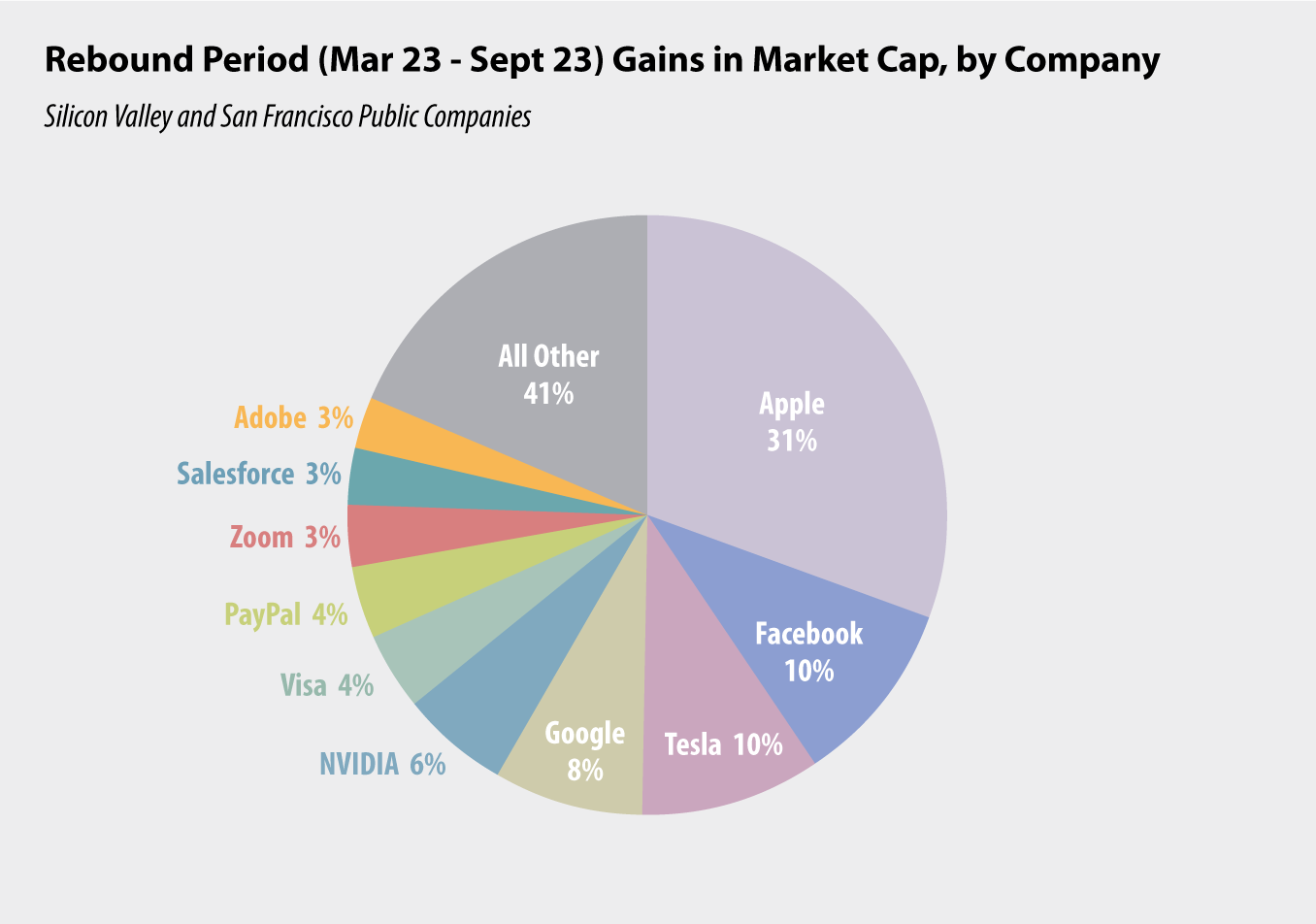 “Silicon Valley’s public companies, overall, showed significant resilience in the face of pandemic-related market declines compared to the U.S. and global exchanges overall – there was some buffering effect going on, likely as a result of those local technologies that were critically needed in the face of social distancing,” said Massaro. “The fact that Zoom and other emerging cloud companies in the EmCloud Index like Square, Twilio, and Coupa Software showed even more buffering capability indicates that the region’s resilience was likely highly influenced by that sector.” 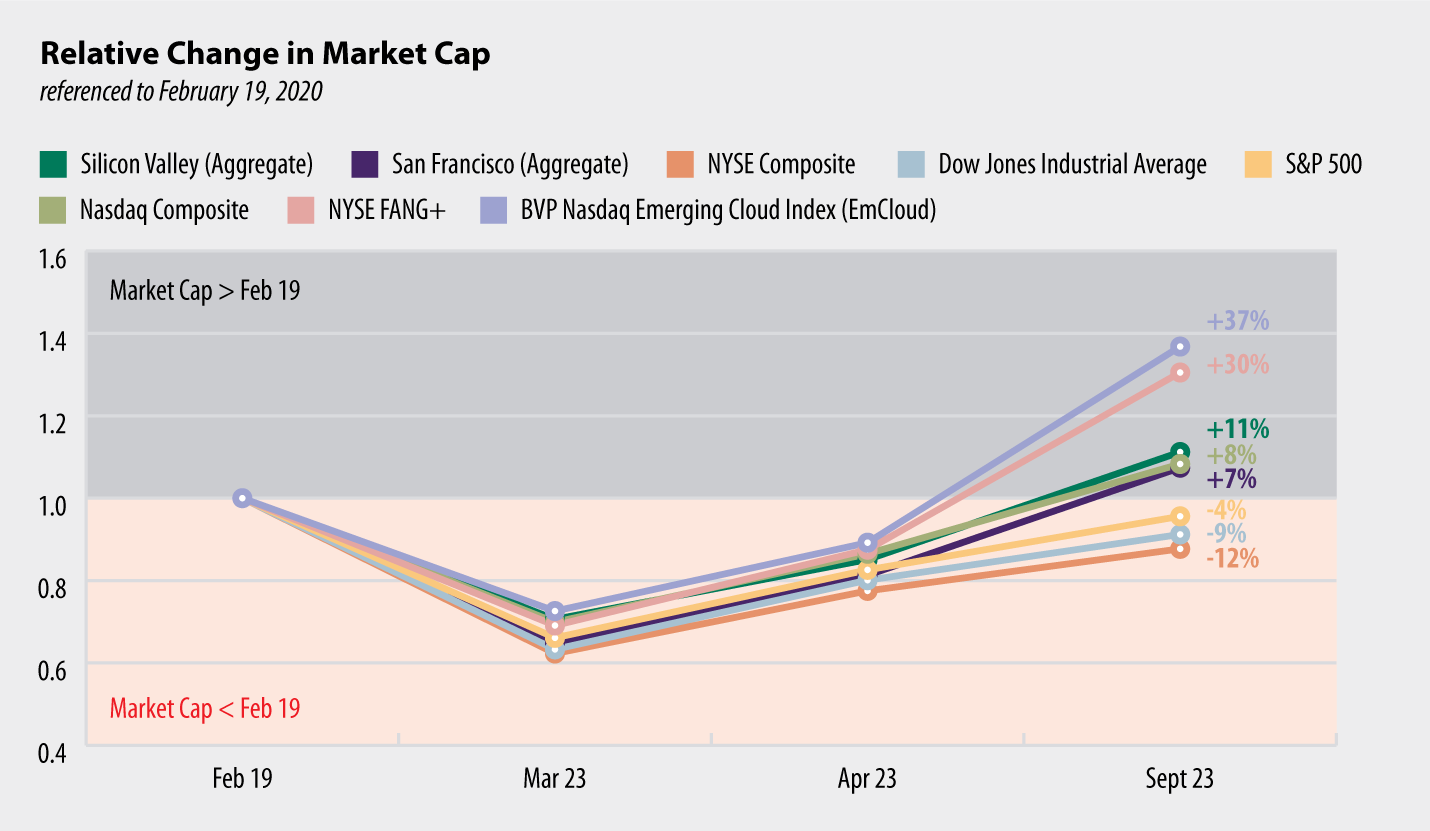 “The only reason why we didn’t nosedive into smoldering ruins as a national economy is because our region’s technology companies have made it tolerable,” said Institute President, Russell Hancock. “Without them, there could be no functioning of the economy and limited communications, not to mention the services and entertainment we all rely upon.”

“You can argue that our region’s companies have not only made our lives better and more convenient, but that they’re what’s made it possible for it all to hang together at all. In contrast to so many other industries like retail and food service, we have very strong tech and professional services sectors that have remained largely intact. In fact, in some cases, they’ve actually benefited from the crisis.”

In conjunction with the analyses regarding public company stock market trends amid the pandemic, the Institute has created a near-real-time online tracker for the region’s public company market performance. The site employs Silicon Valley and San Francisco public companies (as indicated on Crunchbase) and a widget powered by TradingView.

The analysis includes all public companies in Silicon Valley (Joint Venture’s city-defined region) and San Francisco listed on Crunchbase as of April 7 for February and April data, and as of September 22 for September data. Includes multiple exchanges worldwide (e.g., NASDAQ, NYSE, OTC, LSE, SSE), excluding companies listed on the Australian Securities Exchange (ASX) and Toronto Stock Exchange (TSX) as those are not included in the IEX Cloud database. Does not include special purpose acquisition company (SPAC) IPOs. Shares outstanding as of each company’s last balance sheet report was used to calculate market cap for February and April data, unless it was unavailable on IEX Cloud (in which case, the market cap from the closest date was used). For September 23 data, market cap as of that date was used. Analysis from February 20 begins with the closing price on February 19. Closing prices are unadjusted.