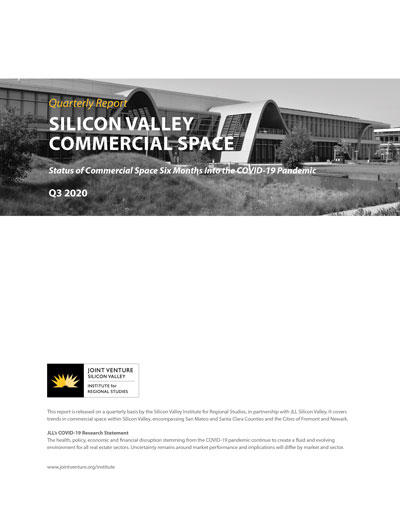 October 26, 2020 – With no end to the pandemic in sight, Silicon Valley companies remain in a holding pattern. Construction delays were the earliest and most pronounced impacts of the pandemic and yet an unprecedented amount of commercial space remains under development. This is according to the latest analysis from Joint Venture Silicon Valley’s Institute for Regional Studies, in partnership with JLL Silicon Valley in their third-quarter Silicon Valley Commercial Space report, published today.

Also due to the pandemic, office vacancy rates near transit have increased significantly due to the workforce remaining predominantly remote, plus an extremely low utilization of public transit. At the same time, asking rents near transit remained steady into Q3, around 80 percent higher than other locations.

“Right now our region is riding the momentum of the past couple years, continuing to churn out a significant amount of new commercial space,” noted Rachel Massaro, the Institute’s Director of Research. “The pace will likely continue until what’s in-progress gets completed. After that, it’ll depend heavily on what the post-pandemic new normal looks like. It’s interesting to note, though, that the need for lab and other specialty spaces will likely persist regardless of whether our workforce remains predominantly remote.”

Regarding the region’s longer-term real estate outlook, Ricky Manago, JLL Research Analyst, noted, “Google’s major redevelopment plans in Mountain View are a good indication of their long-term commitment to office space in Silicon Valley. Even so, much is still up in the air regarding how remote work will be handled in the future by our region’s tech giants and others. It also remains unclear what will happen to leasing velocity upon re-opening, and how much the injection of newly constructed office space will impact market dynamics.”