July 15, 2021 — The Silicon Valley and San Francisco aggregate market cap has more than doubled, rising from $5.5 trillion to more than $12.6 trillion since spring of 2020, according to the Silicon Valley Institute for Regional Studies. The Institute conducted an analysis of Silicon Valley and San Francisco public companies through the first half of 2021, including initial public offerings (IPOs) and aggregate stock market performance. The report also includes a snapshot of the region’s current pool of public companies by industry and by market cap size.

The Institute examined the IPO total for the first two quarters of the year, including the total number within the region, industries of newly-listed companies, most active underwriters, and average return rates. The total composition and market capitalization of the region’s public companies, and changes since the pandemic-related market declines of spring 2020, were also examined.

While Silicon Valley has had a significant number of IPOs (14) in the first half of the year, the return rates have been relatively low, with only a few high performers. In contrast to those newly listed stocks, the region’s aggregate market cap has continued to increase and outpace most of the major stock indices. Since the pandemic-related market low of March 23, 2020, the region’s aggregate market capitalization has more than doubled, reaching nearly $13 trillion.

“It’s important to get a sense of the makeup of our region’s public companies and how well they’re doing on the market – they’re not only large contributors to our GDP but also some of our major employers,” said Institute Director of Research, Rachel Massaro. “At the same time, we look at the types of companies entering the market through IPOs, which changes that composition and provides a meaningful indicator of regional innovation and entrepreneurship.”

Amid record-breaking IPO activity nationwide in 2021 totaling nearly $68 billion, Silicon Valley and San Francisco delivered 17 companies to the market in the first half of the year alone (14 and three, respectively) for a total of nearly $7.7 billion.

**Special Purpose Acquisition Companies (SPACs) and direct listings (such as Coinbase in San Francisco, and San Mateo-based Roblox) were not included in this analysis.

In the first 15 days of July, an additional two local companies have gone public, including Los Altos-based Unicycive Therapeutics (NASDAQ:UNCY) and Menlo Park-based Sight Sciences (NASDAQ:SGHT) — both in the Health Care industry. An additional three more local companies are scheduled to go public over the next week, including San Francisco-based financial services technology platform company, Blend Labs (NYSE:BLND), South San Francisco-based Imago BioSciences (NASDAQ:IMGO) and Santa Clara-based Couchbase (NASDAQ:BASE)— a database provider for enterprise applications. If this pace of IPOs continues into the second half of the year, the region will be on track to have a total meeting or exceeding of the region’s record-breaking number (34) in 2019. 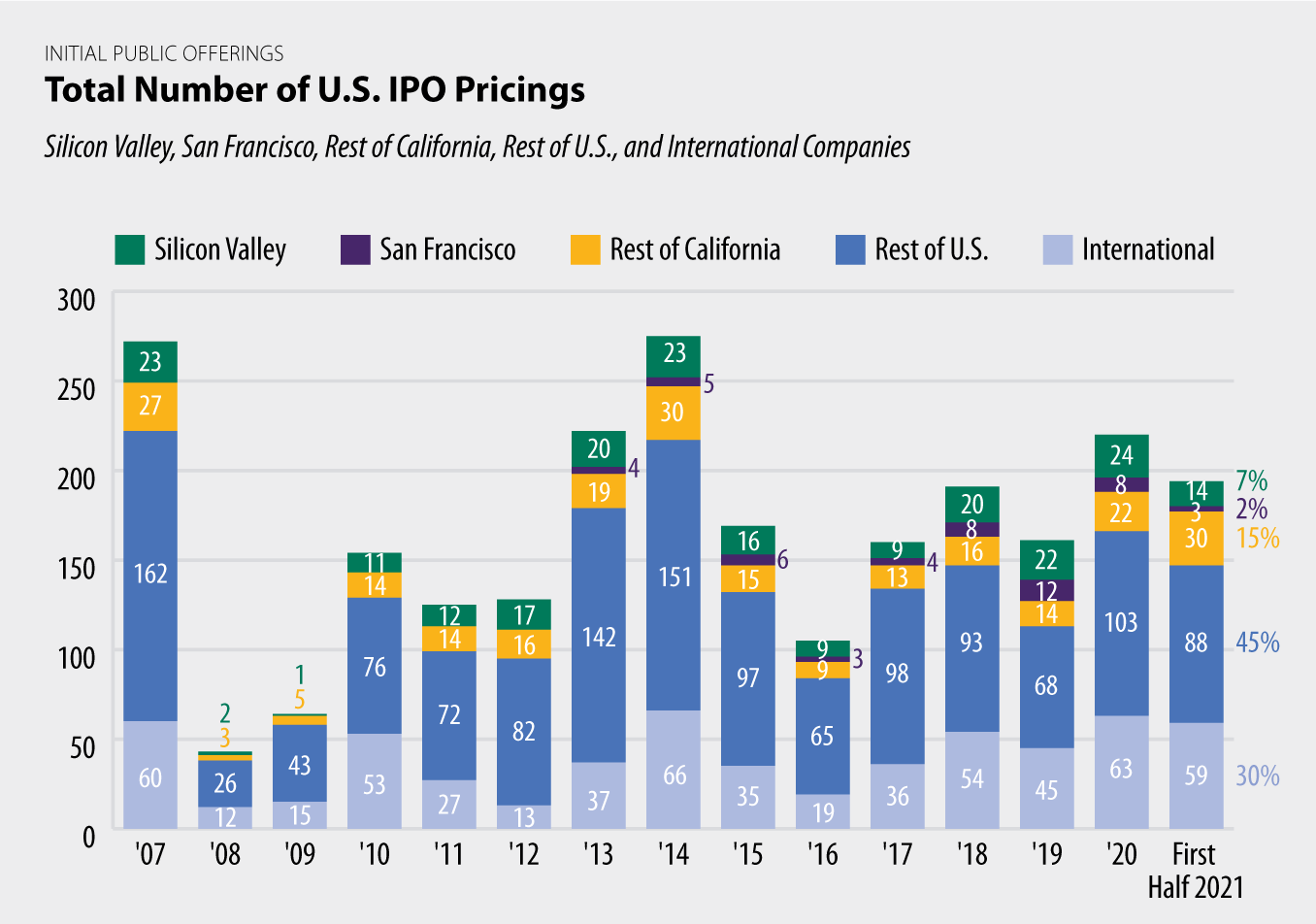 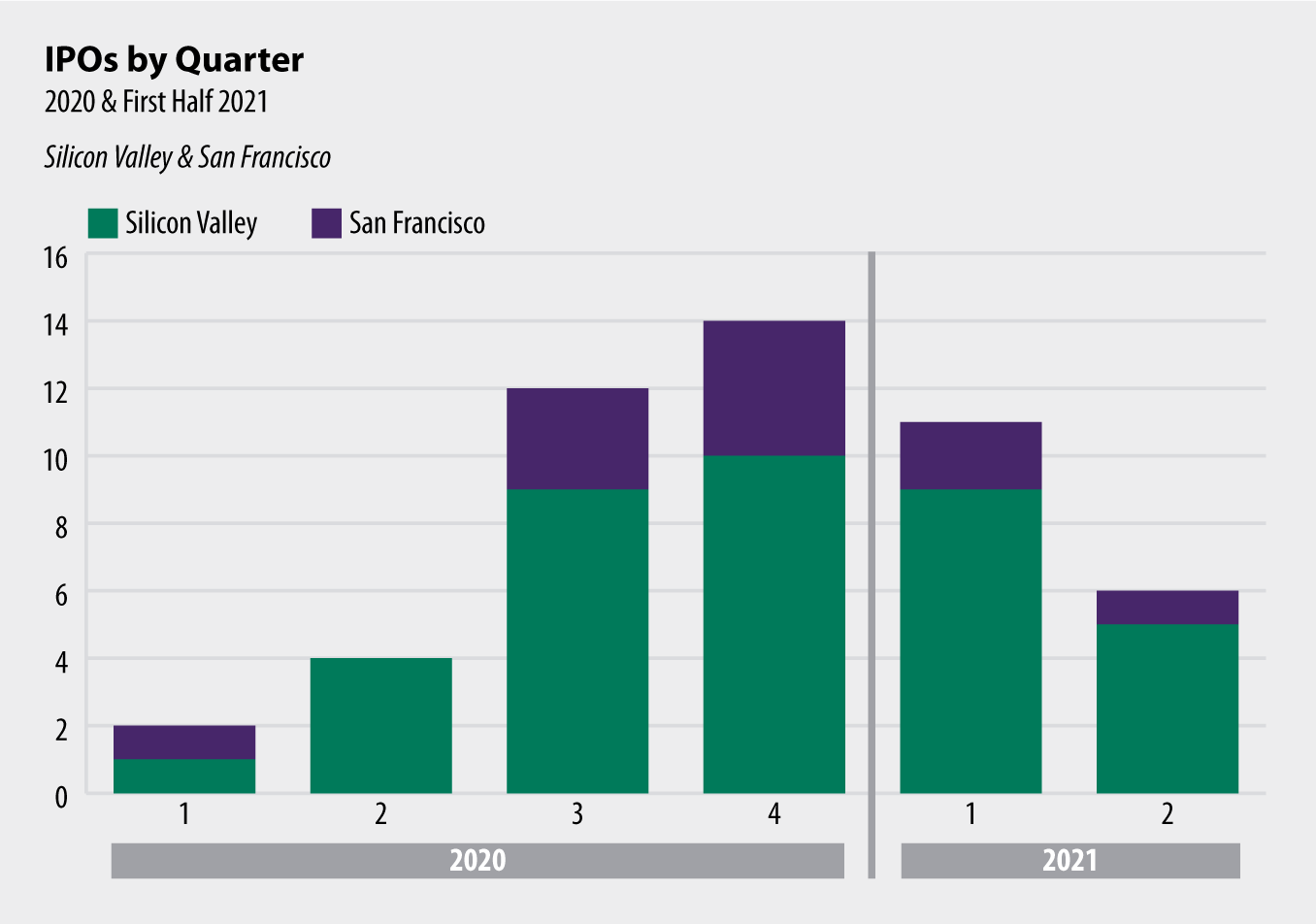 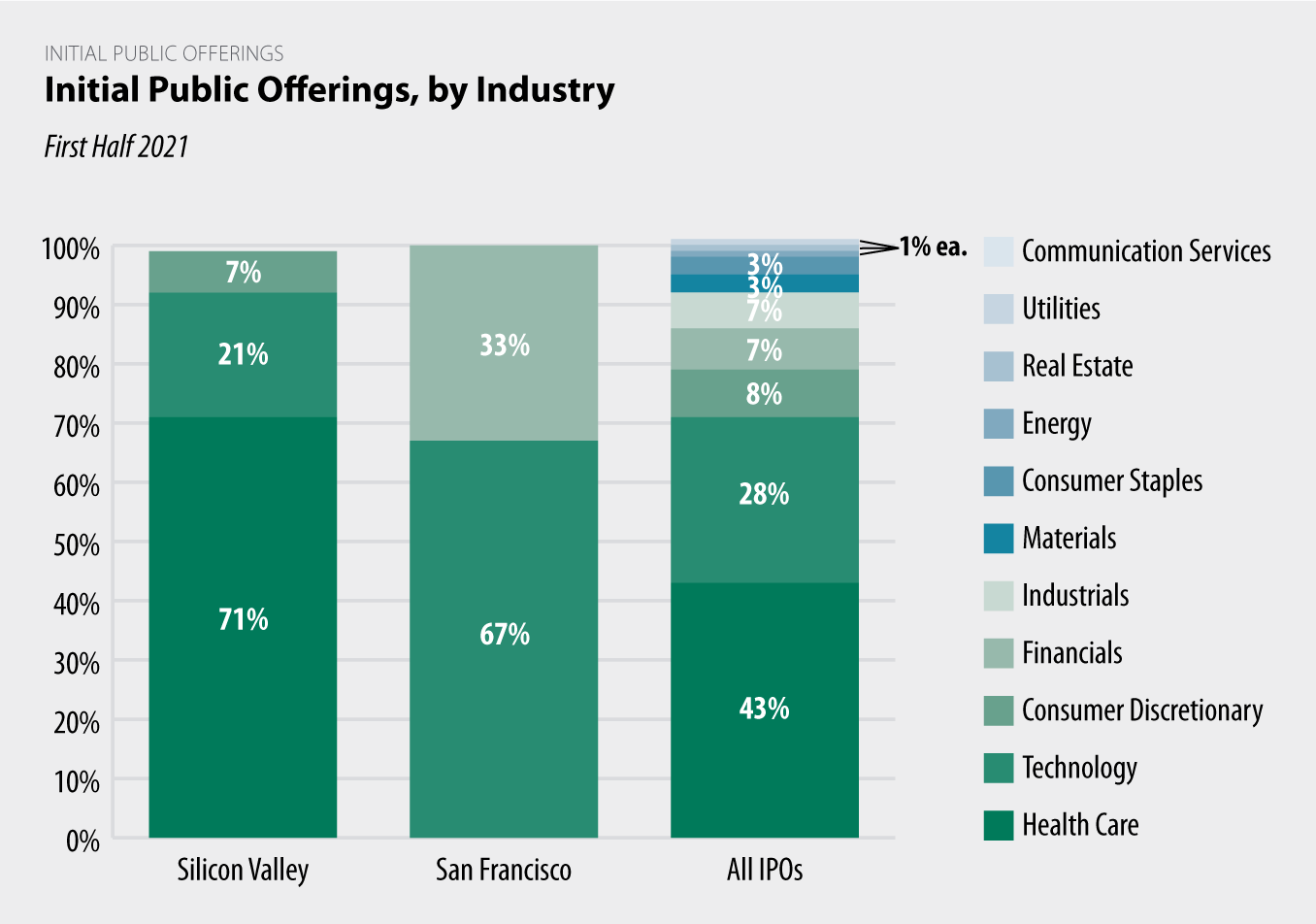 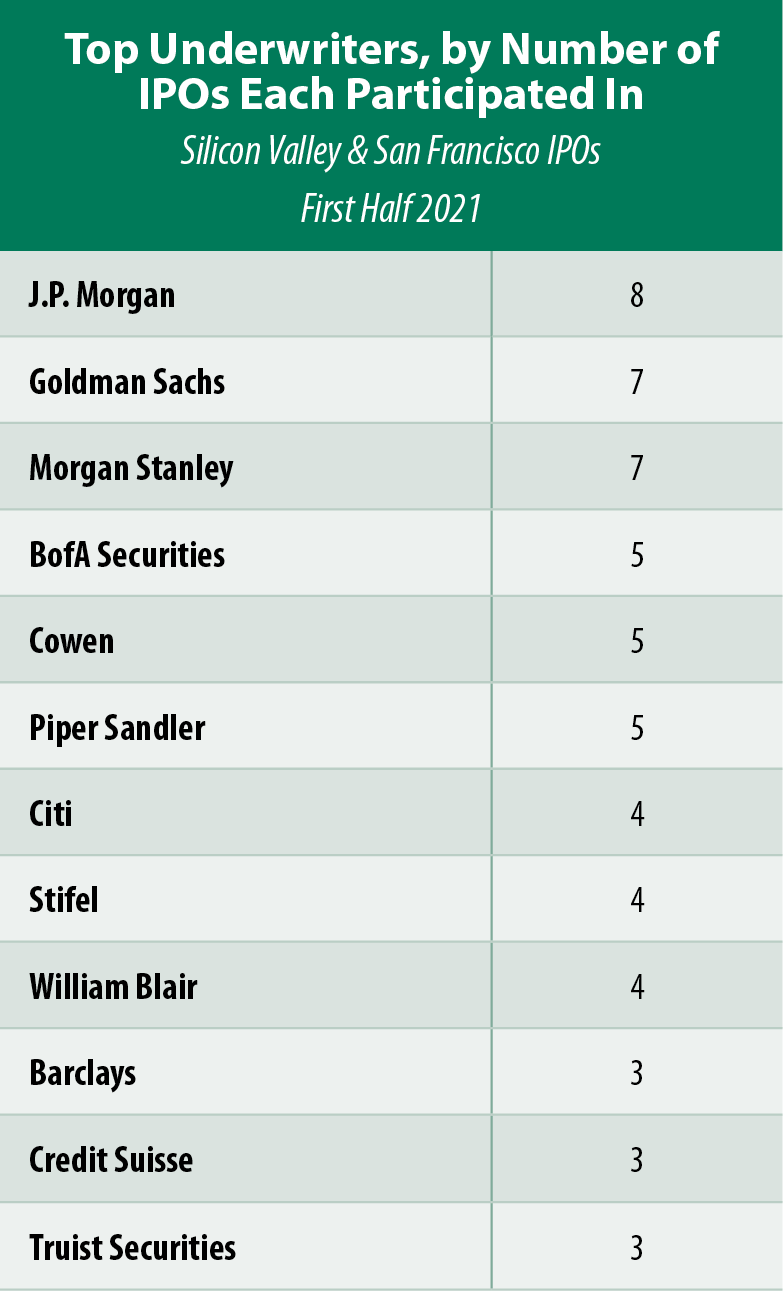 Since the stock market declines that began in mid-February 2020, the Silicon Valley Institute for Regional Studies has been tracking the performance of the region’s public companies. The first market-wide trading halt since 19971 occurred on February 20, 2020 (which was the first halt, or suspension of trading, of the “modernized” Market-Wide Circuit Breaker). Subsequent trading halts across U.S. exchanges followed on March 9, March 12, March 16, and March 18.2

**Market data was obtained from IEX Cloud, and the analysis included all Silicon Valley and San Francisco companies listed on one of the major U.S. stock exchanges, totaling 366 in February 2020 and 345 in June 2021 due to changes such as IPOs and de-listings. 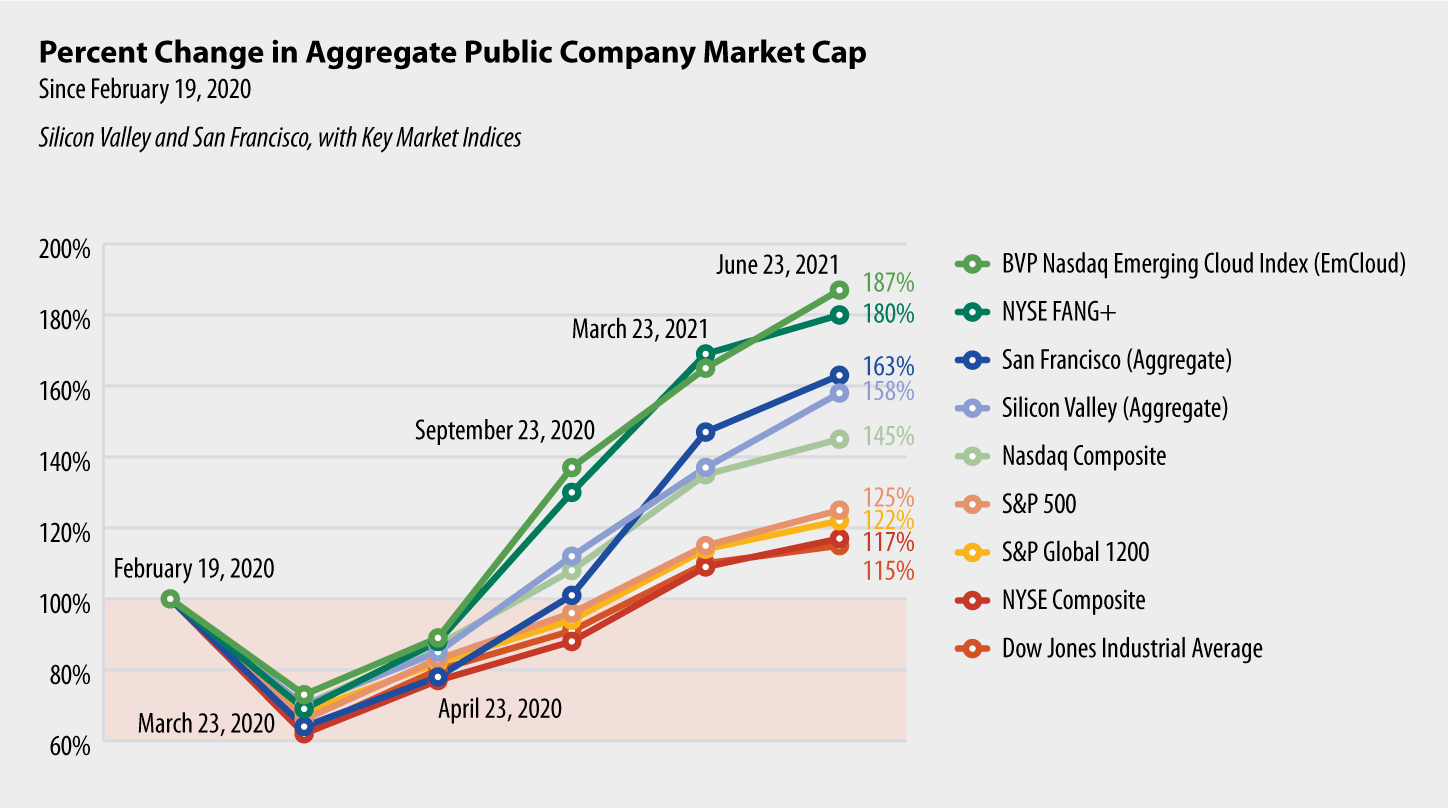 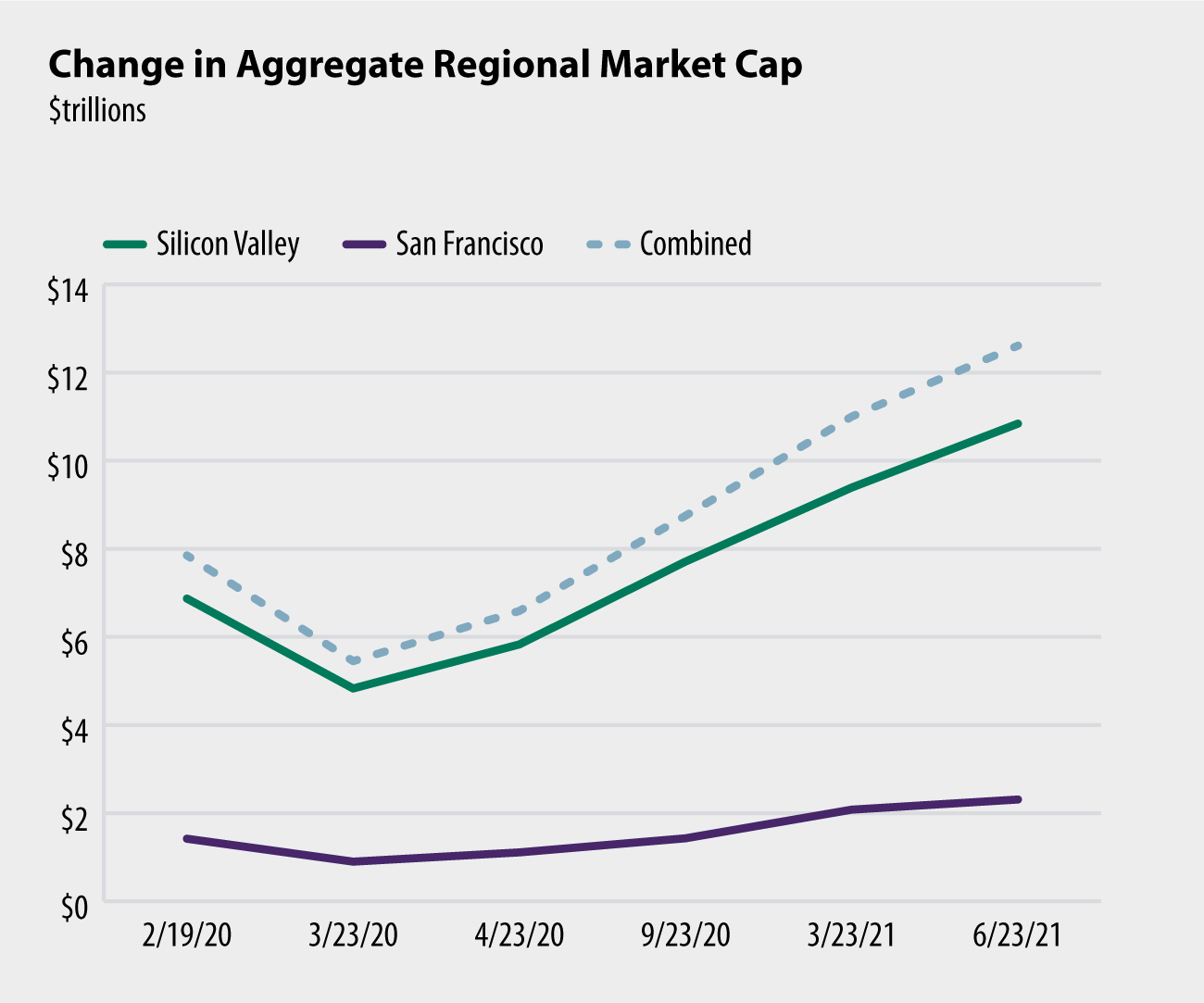 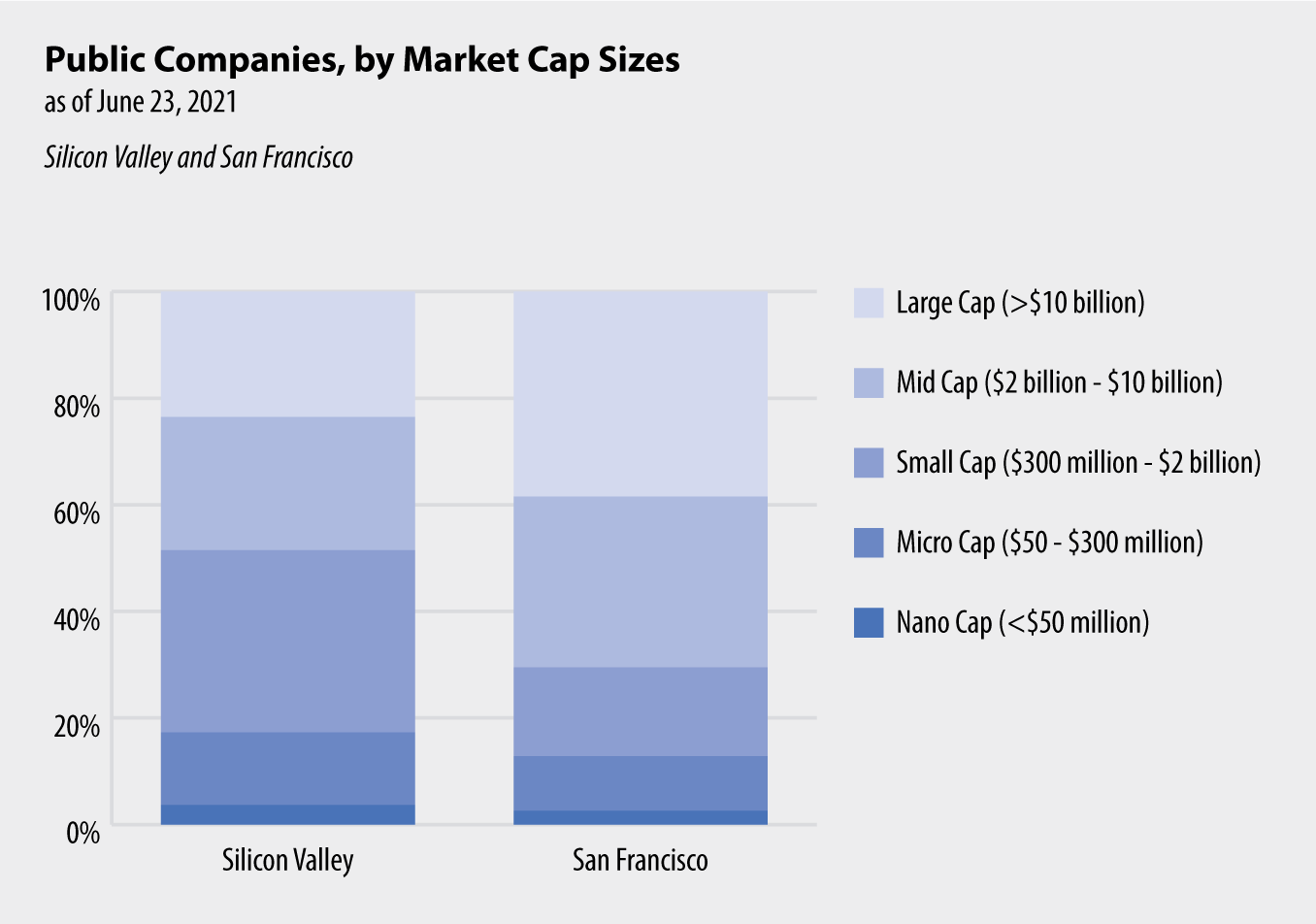 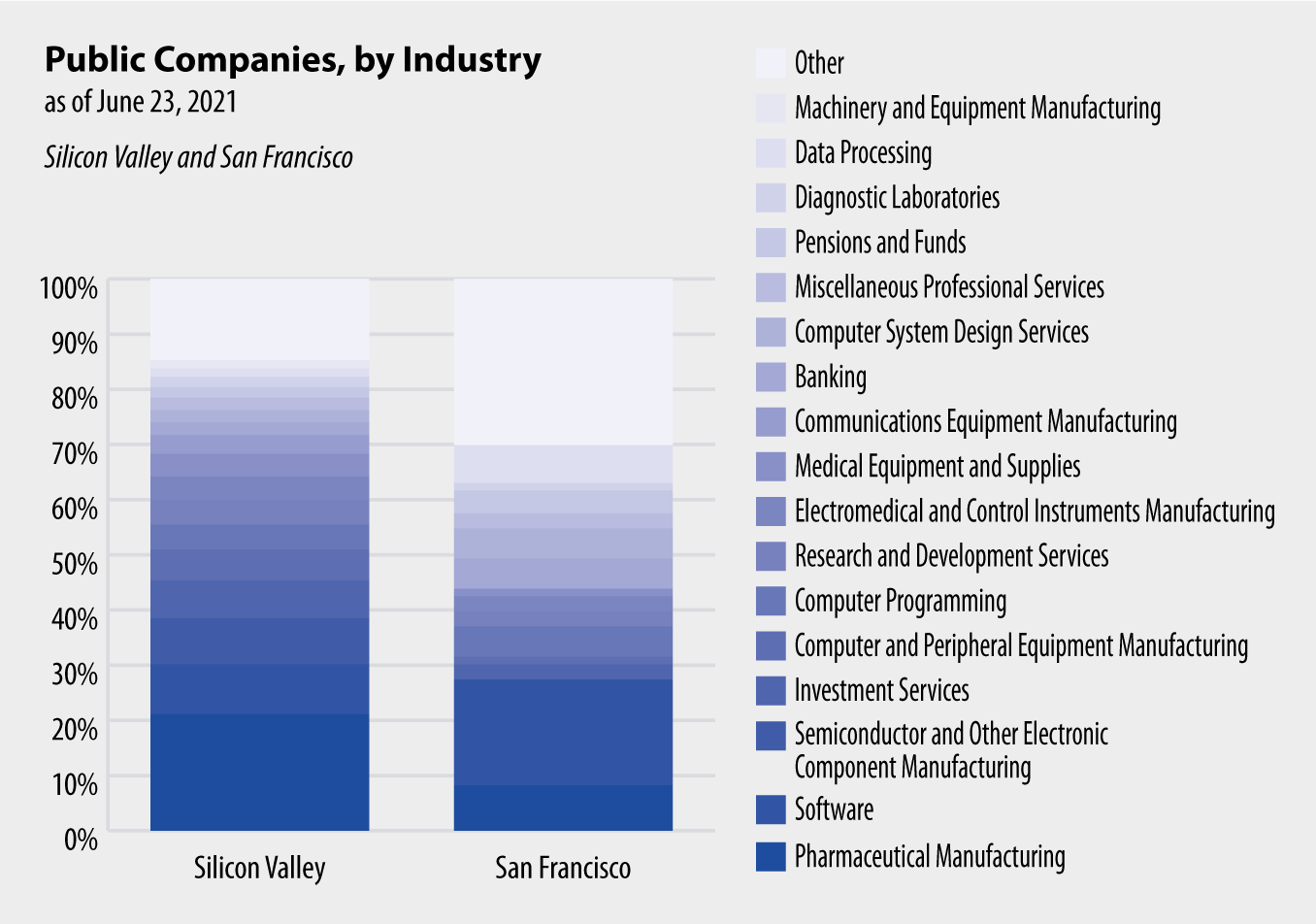 Joint Venture Silicon Valley has been tracking equity financing throughout the region for nearly two decades, beginning with the first Silicon Valley Index in 1995. The Silicon Valley Institute for Regional Studies provides IPO data as far back as 2007 on the online public data hub, www.siliconvalleyindicators.org. Additionally, the hub houses a near-real-time online stock tracker including all of the region’s companies listed on major U.S. stock exchanges using a widget powered by TradingView.

The aggregate stock market performance analysis includes all public companies in Silicon Valley (Joint Venture’s city-defined region) and San Francisco listed on D&B Hoovers as of June 23, 2021, regardless of whether or not the location is the company's headquarters. The list of companies was cross-referenced with those listed on Crunchbase, and new regional IPOs were added manually. Public companies include those listed on the NASDAQ, NYSE, and NYSE American exchanges only. Does not include special purpose acquisition companies (SPACs). The June 23, 2021 data included 272 Silicon Valley companies and 78 San Francisco companies, for a total of 345 unique companies (excluding duplicates).

Shares outstanding (as of the data dates, as available on IEX Cloud) and closing prices were used to calculate market cap; when not available, shares outstanding were taken from the company’s last balance sheet report. For June 23 data, market cap as of that date was used. Closing prices are unadjusted. Public companies by industry are based on D&B Hoovers industry categories, and only include those companies for which a D&B Hoovers industry category was available.