Silicon Valley unemployment edges up to 2.2%

July 25, 2022 – The unemployment rate in the Silicon Valley region increased to 2.2% in June, which was higher than the rate in both April and May. The unemployment rate typically increases between May and June as the school year comes to an end and jobs associated with education decline. The only instances in the last 32 years when the unemployment rate declined between May and June in Silicon Valley was in 1996 and in 2020 during the pandemic when the initial large drop in employment began to steady. Silicon Valley employers decreased their workforce by just over 4,600 employees between mid-May and mid-June, while the labor force increased just slightly (+900 individuals) in the same time frame. The total labor force in the region is still over 44,000 below the February 2020 level.

Overall, employers have added more than 26,300 workers since January of this year and more than 96,100 since June 2021, according to analysis by Joint Venture Silicon Valley’s Institute for Regional Studies. The total number of unemployed in the region increased to 32,300 by mid-June, more than 137,600 lower than the total number of unemployed in Silicon Valley in April 2020. Total employment in the region is up more than 190,500 since April 2020 and the initial job losses associated with the beginning of the COVID-19 pandemic. Overall, job growth is 15.1% over the last 26 months. The unemployment rate in Silicon Valley in June was 3.2 percentage points lower than it was a year ago (June 2021), and 9.7 percentage points lower than April 2020.

The analysis follows the July 22nd release from the California Employment Development Department (EDD). National-level data for June was released by the U.S. Bureau of Labor Statistics (BLS) on July 8.

Publishing Industries (except Internet) added 1,500 jobs as part of the larger sector from mid-May to mid-June. Leisure and Hospitality increased by 4,200 (+2.0%) jobs from mid-May to mid-June, with the majority of gains in Restaurants (+2,700, or +2.0%). Professional and Business Services was another sector with notable gains in the greater Silicon Valley region, adding 3,200 jobs.

“Seasonal cycles have meant that declining jobs in Educational Services and Local and State Government Education have contributed to the growth in the unemployment rate in Silicon Valley,” said Ryan Young, Research Manager for BW Research and an affiliated researcher at the Institute. “Meanwhile, Leisure and Hospitality continues to grow, representing nearly 100,000 jobs added since its nadir in April 2020.” 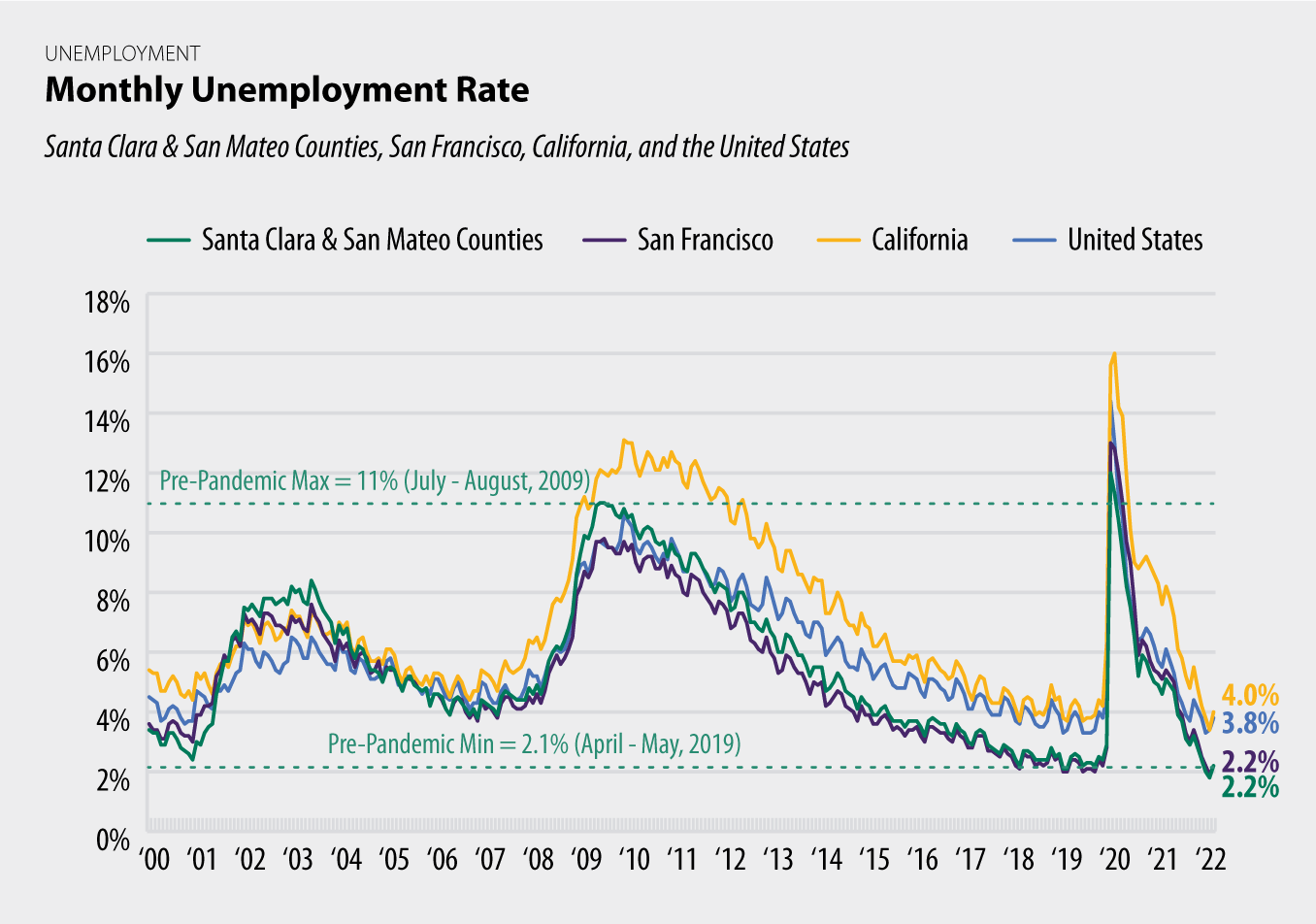 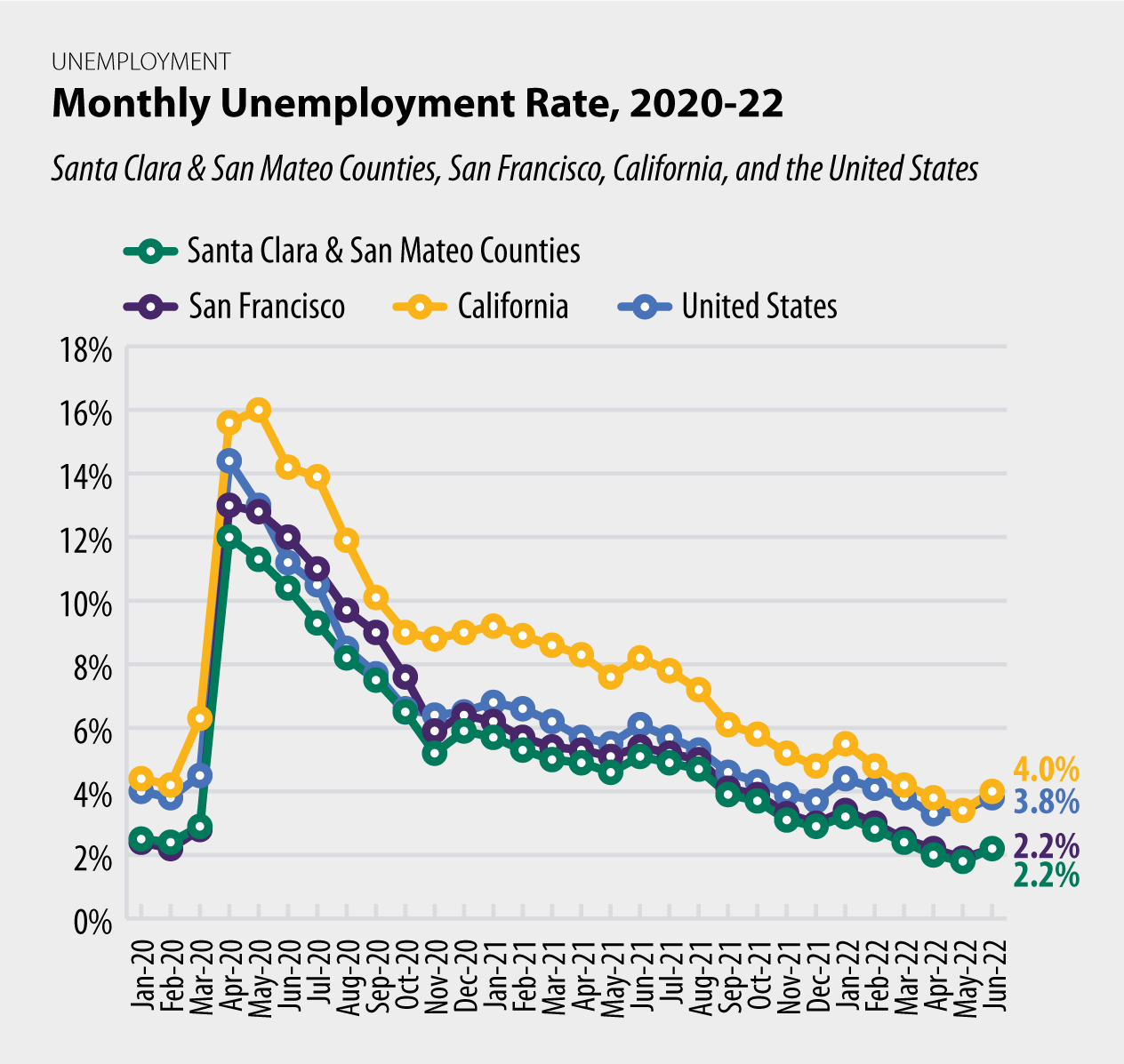 Monthly unemployment rates are calculated using employment and labor force data from the Bureau of Labor Statistics, Current Population Statistics (CPS) and the Local Area Unemployment Statistics (LAUS). Rates are not seasonally adjusted. County-level and California data May 2022 and June 2022 are preliminary, and county-level data for March are from the California Employment Development Department July 22, 2022, release.