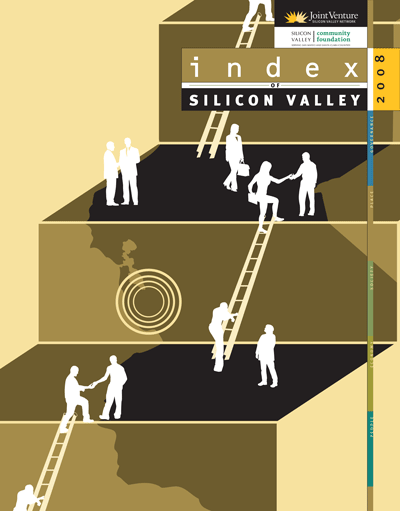 If the 2008 Index were a weather report, it would say we’re in for some stormy weather.

What’s causing it? Some local conditions, for sure, but mostly it’s a series of high-pressure systems outside Silicon Valley that send heavy winds gusting in: a sub-prime mortgage crisis, volatility in financial markets, and a rapidly changing global economy.

The good news is there is a real up-side to the kind of rapid change imposed by globalization, especially for an innovation-based economy like ours. The pages here show widespread productivity gains, as measured by value- added per employee, which rose for the sixth consecutive year and now surpass previous highs from the dot-com boom. We’re still adding jobs and experiencing population growth. Our share of patents reached an all-time high, and venture capital investment rose 11 percent. If the current trend continues, Silicon Valley will command 30 percent of the nation’s venture funding, a remarkable figure.

We should also point out that in the emerging area of clean technology, Silicon Valley has already staked out an early advantage. Our region claimed 62 percent of all cleantech venture funding in California, 21 percent of the nation’s. It’s clear that our Valley’s unique mix of talent, technology, and capital translate into a genuine comparative advantage, and one way this is manifest is in real income gains. This year’s Index shows our region’s per capita income is 57 percent higher than the national average, and growing faster than the United States as a whole. We also report that for the first time in five years median household income rose.

But there is bad news too. Turbulence has meant progress for some and great difficulty for others, and this will be our region’s challenge for some time. As you’ll read in the Special Analysis section, we see a great deal of volatility in the Valley’s mid-wage occupations. Jobs have declined in a number of fields, while increasing in others, due in large part to the impact of globalization on our leading companies.

We’re encouraged that boomer retirements are creating thousands of mid-wage jobs for the region, but it’s not at all clear if those jobs will be filled by a home-grown workforce: high school graduation rates are still a problem; the reading proficiency of our region’s third graders is decreasing; large achievement gaps persist by race and ethnicity; and juvenile felony offenses rose for a fourth consecutive year.

We think Silicon Valley has to be as innovative in the civic arena as it is in the commercial one, if we are going to weather these turbulent times. That is one reason our two organizations teamed up in 2007, so we could help the region break new economic ground together.