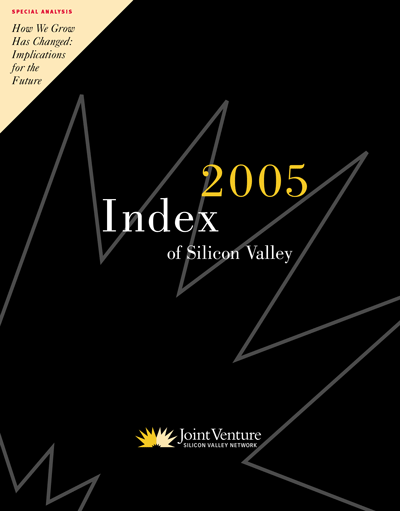 So often the Index has a clear story to tell: our economy is growing or not; people are better off, or not. There is much less clarity in 2005. What we have instead is a complex picture, and how you interpret it depends very much on your point of view. It also depends on the year you choose as a benchmark. If we measure ourselves against last year, then some signals are quite good: venture funding is up, per capita income—driven by rising productivity—is edging upward; R&D funding has reached new highs.

But if we run medium-term comparisons, then it is clear that many Silicon Valley residents have experienced a sharp decline in their economic prospects since 2000, and the region has lost ground. In fact, the Valley’s job losses these past four years are the largest percentage drop of any U.S. metropolitan area since 1939; wages, income, and VC funding are also dramatically short of the 2000 mark.

Perhaps it makes more sense to measure ourselves against the late 1990s, just before the dot-com phenomenon set the region to overheating. If that’s your point of reference, then we seem to have returned to similar levels of performance, and resumed an incremental pattern of growth.

However, the 2005 Index also shows there is something profoundly different this time around: how we grow has changed. The technology revolution and intense global competition have led Silicon Valley companies to achieve high productivity gains without adding to their payroll, creating a strange new world in which economic growth is strong even while job growth is sluggish. It suggests a future in which we grow qualitatively (in terms of productivity) but not quantitatively (in terms of jobs).

To keep pace with the competition, Silicon Valley companies must continue to innovate and boost productivity. Can we sustain the pace? Innovative, high producing economies are built on a foundation of productive people thriving in vital communities, so the key question is whether our region has the essential foundations in place. Are we preparing our workforce for new and transitioning occupations? Or will a new era of qualitative growth keep widening the disparities between those who prosper and those who struggle?

The signals reported here are not altogether encouraging. Health and education gaps persist by income and ethnicity. Housing is out of reach for too many, making it difﬁcult to retain young talent, teachers, and service professionals. The incomes of the bottom 20 percent of households have fallen further behind. Our local governments face impossible budget choices as their revenue streams destabilize, leaving it an open question whether we’ll be investing in the kind of infrastructure an innovation economy requires.

This much is clear: we have a great deal to be grappling with as we contemplate Silicon Valley’s future. Joint Venture exists for this purpose, and in the coming months we hope to stimulate a broad regional conversation about how we grow forward, together.