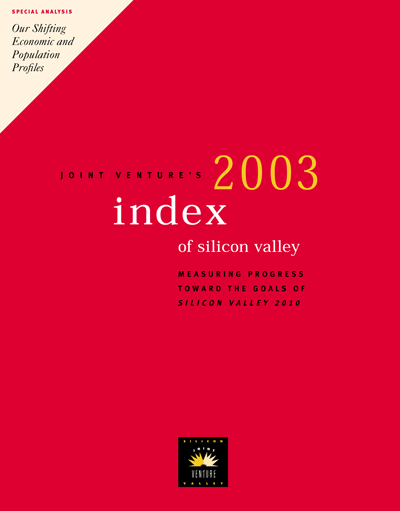 The 2003 Index of Silicon Valley tells the story of a region in transition as it responds to an economic boom and bust cycle and deeper economic and structural changes. But we also see a region making progress on some important long-term goals outlined in Silicon Valley 2010: A Regional Framework for Growing Together.

The region has undergone major economic and demographic shifts in recent years. Structural economic change has occurred, with employment shifting from hardware to software and services, and with a new shift toward biomedical. During the past decade, the region’s population became not only more diverse, but also more international and more educated.

The local education system is improving in some areas, such as graduation rates and English Learners’ third-grade reading scores. The region’s development pattern is continuing to move toward the livability goals of the Silicon Valley 2010vision, with trends toward more permanently protected open space, more efﬁcient land use and an expanded rail network. But we still have a housing affordability problem.

Other social and civic challenges remain. The average income of households at the 20th percentile has surpassed the 1993 level, but has not kept pace with the increased cost of living. Local municipalities are increasingly dependent on sales tax and fee revenue, as only 9% of property taxes go to fund city government.

Silicon Valley must sustain progress and commit to meeting long-term economic, social and environmental goals, even as it adjusts through the latest short-term economic cycle and adapts to fundamental changes taking place in the region.