Building the Next Silicon Valley: Strategy and Actions 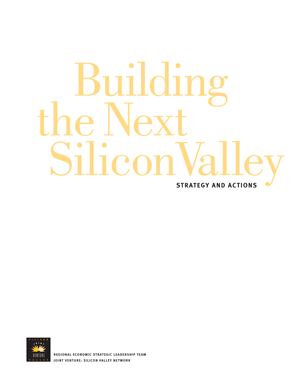 Silicon Valley is a “habitat” for innovation and entrepreneurship. The Valley is a gathering place for researchers, entrepreneurs, venture capitalists, and skilled workers who turn new ideas into innovative products and services. This special habitat allows the region to adapt to waves of innovation and adjust to economic cycles.

Today, the Silicon Valley habitat faces multiple challenges as it deals simultaneously with a boom/bust cycle, new waves of innovation, and the economic shocks from the September 11 terrorism attack. Will Silicon Valley adapt once again to these forces of change? What will be the Next Silicon Valley?

After annual job growth averaged 4.2% between 1994 and 2000, Santa Clara County lost 3.7% of its jobs from December 2000 to October 2001. This bust was inevitable as entrepreneurs and investors swarmed to take advantage of new Internet opportunities, proliferating new companies and driving down profit potential. This phenomenon is the “hype curve” and often accompanies the introduction of a fundamentally new technology.

Today is not the first time that Silicon Valley has experienced a boom/bust cycle. The Valley experienced significant job growth, followed by job losses, in the 1970s, 1980s, and early 1990s. Each time, from these down cycles emerged the “next” Silicon Valley economy. Economic adversity helped stimulate the Silicon Valley habitat to major innovations, including the commercialization of the integrated circuit (1970s), the development of the microprocessor and personal computer (1980s), and the
application of the Internet (1990s).

As we adjust to the current boom/bust cycle, new waves of innovation are coming now. Innovation usually occurs near the intersection of disciplines at times of economic change. We can look forward to a deepening of information and communications technology in both the economy and society as we move past the first phase of the Internet toward the mobile Internet, new productivity tools, and applications of technology in education, government, and the community. We can expect major advances in biotechnology to converge with information technologies and create new opportunities in the emerging fields of bioinformatics, biomaterials, and biochips. The commercialization of nanotechnology holds the potential to revolutionize chip and computer manufacturing. Silicon Valley has strengths in each of these emerging areas, and companies already exist or are starting in these areas.

Silicon Valley’s role in the global economy is changing, speeding up these oncoming waves of innovation and increasing volatility in economic cycles. The Internet explosion spread quickly to other global regions, resulting in a massive overcapacity because of hypercompetition. Whereas this competitive feedback loop took 15 years in the semiconductor industry before Japan and other foreign economies learned to compete with Silicon Valley in the 1980s, it took less than 5 years with the Internet in the 1990s. This acceleration leads to great volatility for Silicon Valley firms and people.

Silicon Valley continues to have strong technology, human, and capital assets and the largest concentration of technology firms in the world. The region’s habitat for innovation and entrepreneurship remains its greatest long-term strength and the source of its great productivity advantage, which creates wealth for its people. Other regions, however, will vie to lead the next waves of innovation. And the accelerating waves of innovation and economic cycles combined with external shocks have begun to outrun our ability to respond as a region. Leaders need to create a resilient region — one that can support people, companies, and communities as they mutually adapt to increased economic volatility. The more innovation based the economy, the more important the social infrastructure that supports that economy.

Commitment to Social Innovation. Creating a resilient region will require a new commitment to social innovation. Valley leaders from all sectors need to commit to realigning workplaces, institutions, and infrastructure to new economic and social realities. Unless social innovation accompanies technology innovation, the relentless flow of new innovations can have real and growing downsides — downsides that threaten the special habitat that births them.

The Next Silicon Valley can emerge from our current challenges and ride the next waves of innovation based on new technologies. The Valley will prosper again. The challenge will be to nurture technological innovation continually and to promote social innovation that is just as strong so that all Valley residents can share in that prosperity and quality of life.