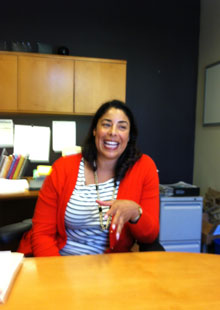 Growing up in San Jose, Christina Gilmore didn’t imagine a career path that would find her living in Washington, D.C. for school and working in London for a tech company before finding her niche in municipal government right back here at home.

After graduating from Howard University, Gilmore worked in web marketing for 3Com and Informix Software and as a program coordinator with Santa Clara University, and finally gravitated to public sector positions in San Jose and later in the cities of Mountain View and San Mateo.

Since February Gilmore has been Assistant to the Town Manager of Los Gatos and she is also the newly appointed co-chair of Joint Venture’s Public Sector Climate Task Force.

“Los Gatos is near and dear to me,” says Gilmore. “Having lived in Silicon Valley most all my life, I’ve always had a high regard for Los Gatos and it’s a great town to work for. There is a great sense of community here, the people are friendly and it’s a picturesque, walkable community. The only problem is there are too many good bakeries!

“I first became involved with Joint Venture in 2007 when I began working on sustainability programs for the City of San Mateo, so I’m honored and excited to be a co-chair of the task force.”

“Joint Venture does a great job of bringing together people from other jurisdictions to collaborate on projects and to share information. It’s really helpful to be at the table with other cities, to learn what they are doing.”

“Greg and Pamela are great to work for and I have wonderful support here,” she says. “Our organization is like a family and Los Gatos has a very close-knit community. I am enjoying the opportunity to interact with residents and working on community events.”

Among her current projects, Gilmore is helping to organize the Los Gatos-Monte Sereno Community-Wide Garage Sale on October 5, an annual event that draws more than 100 homes and businesses in a town-wide cleanup. “The event helps with the Town’s overall waste reduction goals with an emphasis on reducing, reusing and recycling,” says Gilmore.

Sustainability is a priority in Los Gatos, which recently enacted a ban on single-use plastic bags. Gilmore was instrumental in providing staff assistance for the ban ordinance and is assisting the town council with guidelines for additional sustainability measures regulating polystyrene containers and leaf blowers.

As Webmaster, Gilmore is using web skills she gained with 3Com and Informix to upgrade the town site.

“I’m learning our content management system, with hopes to redesign the website in 2014 to create a better interface and install applications and technology that we don’t have in place now,” she says.

Prior to Los Gatos, Gilmore was a management analyst for nearly seven years with the city of San Mateo’s Community Development Department, which brought her in contact with Joint Venture’s climate and economic development work.

“It was just about the same time that San Mateo adopted its climate action plan,” she says. “I learned a lot. The Joint Venture staff is so well organized and well informed. They deliver some amazing work."

“Joint Venture does a great job of bringing together people from other jurisdictions to collaborate on projects and to share information. It’s really helpful to be at the table with other cities, to learn what they are doing.” 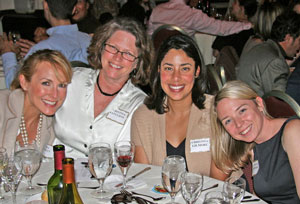 Gilmore says her goal as co-chair of the Climate Task Force is to help facilitate conversations between municipalities, counties and the private sector about best practices in sustainability and climate protection efforts and to further the work of the task force.

Gilmore and her younger brother were born in San Jose to Arthur Gilmore, a Lucent Technologies sales director, and his wife, Dreda, a medical scheduler.

Christina has fond memories of performing in children’s theatre growing up, and took lessons in dance – jazz, tap, ballet – as well. “I was really shy,” she says. “Performing helped draw me out.”

After graduation from Presentation High School, Gilmore attended De Anza College for one and a half years before realizing she wanted more from a college experience.

“I thought, how far away can I go? I applied for Howard even though I didn’t think I could get in, but I did. I told my mom I was going to Washington, D.C., that I was going to work in government, maybe even in the White House, and I wasn’t coming back.”

Gilmore graduated from Howard in 1996 with a degree in political science and took the web marketing job with 3Com, which included living in the United Kingdom for five months as manager of global web programs.

She returned to the U.S. in 1999 and spent the next two years in web marketing for Informix until the dot com bubble burst and she found herself job hunting.

“Working in technology wasn’t all that fulfilling for me anyway,” says Gilmore, “so I decided to focus on local government.” She eventually found an internship with San Jose city council member Cindy Chavez, which led to a permanent position as a senior policy aide for council member Linda LeZotte.

“She is very much a relationship builder,’ added Miller. “She’s very smart, a hard worker. She also has a good sense of humor and doesn’t take herself too seriously.”

Gilmore enrolled concurrently in graduate school at the University of San Francisco, where she earned her master’s in public administration in 2006. With her MPA in hand, Gilmore landed the San Mateo job, where she remained until coming to Los Gatos.

“I learned so much in the last ten years,” says Gilmore. “I’ve had tremendously satisfying jobs. I love being on the front lines of local government, with the ability to solve problems and make a difference in people’s lives.”

In addition to her Joint Venture duties, Gilmore also is president of the Municipal Management Association of Northern California, a professional organization focused on developing the next generation of local government leaders, and is active with the International City/County Management Association and P.E.O. International, a philanthropic organization that encourages the educational advancement of women through scholarships, grants and awards.

“I love being on the front lines of local government, with the ability to solve problems and make a difference in people’s lives.”

“Christina is doing great with her workouts and bringing about a better work-life balance,” says her fitness coach, Huong Ho. “She was hard to get started, to get motivated [because of her work commitments], but now she’s helping the other girls out, and she’s getting a lot stronger.

“We call her an ‘undercover worker’ because she can be quiet but she works hard at whatever she tries to do. She gives 110 percent and she really enjoys it.”

When prompted, Gilmore says she has entertained the notion of becoming a city manager eventually, but not anytime soon. “I see how hard Town Manager Greg Larson works and how much is involved. I’m doing what I can to learn what it would take to be a great city manager. Maybe someday.”