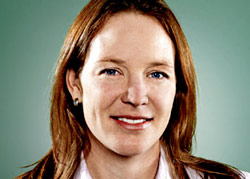 With a new baby boy due any minute, you’d think Minnie Ingersoll would have savored the opportunity for some down time at home from her busy schedule as a principal for access strategy and civics at Google.

But you don’t know Minnie. Just days before giving birth, Ingersoll, who lives near Dolores Park in San Francisco, readily agreed to meet a visitor at Google’s YouTube headquarters in San Bruno to talk about Google and her work as a Joint Venture Silicon Valley board member.

“I’m supposed to be on maternity leave,” she averred as all 8.9 months of her pregnant self bounded into the reception area at YouTube.

“Well, I am on maternity leave, officially,” she corrected herself, “but I like coming here. I like the interaction with others, the culture. I get a lot of my work done here. And I still believe in face-to-face meetings.”

If Ingersoll’s energy, work ethic and academic genes are any measurement, her kid doesn’t stand a chance – of being unsuccessful. (Note: Minnie gave birth to a 6-pound, 13-ounce son, George Robert Milner, on October 28, 2014.) 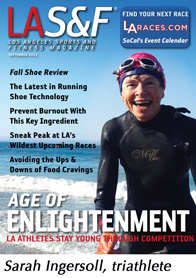 “I come from a nerdy family,” says Ingersoll, herself a Stanford University and Harvard Business School grad. Her father, Andrew, who holds a Ph.D. in atmospheric physics from Harvard and is among the world’s experts on Jupiter’s great red spot, is the Earle C. Anthony professor of planetary science at the California Institute of Technology in Pasadena. Minnie’s mother, Sarah (on magazine cover, left), teaches clinical neurology and clinical informatics at the University of Southern California when she’s not competing in triathlons – in the 70-to-75 age group.

And all four of Minnie’s siblings have advanced degrees, although her father teases that her Harvard MBA doesn’t count as a real one.

What’s more, Ingersoll was a teaching assistant for Marissa Mayer’s Stanford computer science class in Mayer’s pre-Google days and crossed paths with Google founders Larry Page and Sergey Brin at Stanford at about the same time.

“I know a lot about computer science but I don’t have a good understanding yet about how government works, how things get done in cities. It’s very helpful to have a seat at the table.”

Fortunately for Joint Venture, Ingersoll is using all this academic and computer science largesse to help Silicon Valley cities and other public agencies maximize the benefits of Google’s copious products and services.

“I love local government,” says Ingersoll. “We need partner cities as pilots even when we’re working on nationwide efforts. We want to better understand government’s pain points so we can figure out what Google tools could be used to help. It’s part of our DNA.”

An example, she says, is during elections, when voters are looking for information.

“We get millions of searches in the month before an election,” says Ingersoll. “People want the answers to three questions: where is my polling place, who’s on my ballot and what ID do I need to bring?

Until recently, there wasn’t an easy, consistent way for cities to publish this information beyond mailing paper ballots. By promoting open standards for this sort of data, Google aims to help people connect with their local governments.

The same is true for natural disasters like the Japanese earthquake and resulting tsunami two years ago, she says, when people were looking for information about family members and loved ones.

According to a Mercury News story at the time, more than 140,000 names were entered into Google’s Person Finder, which was set up hours after the quake and was accessed by more than 600,000 users.

“Cell towers may be knocked out in a disaster, but the Internet and texting may still be working,” she notes.

Serving on the Joint Venture board with other company executives, public sector officials and community leaders gives her insight on regional issues, she says.

“I know a lot about computer science but I don’t have a good understanding yet about how government works, how things get done in cities,” says Ingersoll. “It’s very helpful to have a seat at the table.”

“I’m learning a lot about permits and rights-of-way and the process of government. My biggest lesson so far is that some cities put up roadblocks and others are more cooperative, and we are definitely looking for cities that want us to help.” 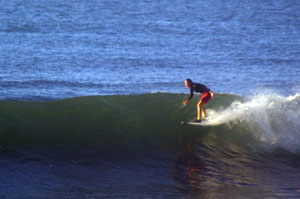 “Minnie is by far one of the strongest, most natural mentors I’ve ever had,” said Scott Schwaitzberg, a colleague at Google for the past year and a half. “She’s incredibly knowledgeable about Google, capable, super smart, passionate and supportive. “Minnie is one of those ‘yes, and…’ people, not a “no, but…” type. Her willingness to build and leverage relationships has been mind bogglingly great.”

Named for her grandmother, Minneola, Ingersoll was born in Los Angeles, the fourth of five children. She attended Polytechnic High School, where she balanced her studies with soccer, softball, tennis and surfing.

A catcher and shortstop on the softball team, she was recruited by Princeton and West Point, but says she always wanted to go to Stanford, following her older sister, Marion, and did.

“Minnie has a combination of unbridled enthusiasm and super smarts,” says Marion, now Marion Quinones, senior development director for the University of California’s Haas School of Business in Berkeley. “She’s the only person I’ve met who was both a Kappa Kappa Gamma as well as a total kickass computer science major.”

“Minnie has a combination of unbridled enthusiasm and super smarts.”

Minnie did walk on the Stanford softball team for a time, but left after concluding her future was in computers, not softball. She graduated from Stanford in 1998.

After Stanford, Minnie moved to New York City to work with McKinsey & Co. and later digital engagement startup LivePerson, but then decided to pursue her MBA, which she earned at Harvard in 2002 before returning to California.

“I had scratched my east coast itch,” she says, “and I missed Silicon Valley, the meritocracy of it, and I had ties here.”

She landed her first role at Google that year as a product manager in search and ads. For the next three years she worked in Google Talk and Google Chat before founding and managing Google Wi-Fi and Location Based Services in 2005. She joined the Access Strategy Team in 2007. 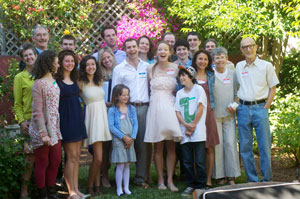 Three years ago at a South of Market watering hole popular among the tech crowd, Minnie met a young Brit named James Milner, a consultant with McKinsey & Co.

“I told him I was going to Santa Cruz the next day to surf and he said he was interested in learning to surf,” she recalls. “So we went together.” They’ve been riding that wave ever since.

Minnie and James got married last year at San Francisco City Hall. “I’ve always loved the beauty of City Hall and I even read a Yelp review of the marriage ceremonies,” she says. And now they’re having a son.

“Minnie’s is going to be a special birth,” says Marion, who has three children of her own, lives nearby and still exercises regularly with her sister.

“We’re all very close, the whole family. But this is different. Our mom may have spent a day or two with her other children when their kids were born. For Minnie, she’s moving in. That’s the kind of closeness Minnie inspires.”

“I thought the time was right for me to have a baby,” says Minnie. I have nine nieces and nephews and I’m ready for my own child.

“I finally learned that you can have it all, just not all at once.”