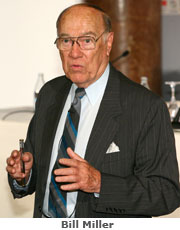 Remarks by Joint Venture board member Keith Kennedy presenting the 2008 David Packard Award to William F. Miller at the State of the Valley conference, Feb. 22, 2008:

Once every generation there’s an extraordinary person who comes along, somebody with prodigious gifts, somebody who could excel in any field and does, but sees these talents as a call to higher service.

At the time of our nation’s founding Thomas Jefferson was such a person: an inventor, musician, author and poet, botanist, farmer, statesman, institution builder. As Russ Hancock likes to say: Bill Miller is Silicon Valley’s Thomas Jefferson.

He is that rare multiple threat: teacher, distinguished scientist and scholar, conservationist, innovator and entrepreneur, founder of companies, venture capitalist, founder of non-profits, institution builder, advisor to governments, and a tireless champion of Silicon Valley.

He was raised in Indiana and served in the army in World War II. He received his B.S., M.S., and Ph.D.s all in physics from Purdue University. Purdue wasn’t to forget Bill, however, as the University awarded him with an honorary doctorate in 1972. He also married the lovely Patty Smith while at Purdue. Bill first joined the Argonne National Laboratory where his research contributed to the development of the modern computer.

He was recruited to Stanford in 1964. He was the last person hired by Frederick Terman, the legendary Dean of Engineering who had earlier mentored David Packard and Bill Hewlett and championed their fledgling company. Thus began Bill’s lifelong association not only with Stanford, but with the growing phenomenon that would later be called “Silicon Valley.”

His academic achievements at Stanford are extensive but, you must remember that “professor” is only one of the hats Bill wears. Bill was to play a crucial role at Stanford over five decades and he is not yet finished.

First of all, Bill was flagrantly multi-disciplinary—an early poster child for what has become one of Stanford’s great claims to fame, the multi-disciplinary approach to scientific inquiry. Though he was hired as a physicist and computer scientist, before long he was holding appointments all over campus: in the Business School, the School of Engineering, the Linear Accelerator, the Institute for International Studies, and the Asia-Pacific Research Center.

Bill also played a large role in the creation of the modern venture capital industry, as a founding partner and advisor to The Mayfield Fund in 1969. But he has been much more than just an investor. He has shaped the course of the corporations that have defined our economy, serving on the boards of Signetics, Fireman’s Fund Insurance, Wells Fargo Bank, PG&E, Varian, Borland Software, Nanostellar and many others.

He became Stanford’s first Vice President for Research, and then Provost, and here is the second thing we must say about his service to Stanford: he had unusual gifts for institution building. His strength, all agree, is bringing people together, building bridges across departments, creating new centers, linking scholarship with industry, lining up incentives, bringing in new funders.

But here is the final thing we’ll say about his service to Stanford: more than most, Professor Miller had a case of the itchy feet. You see, he thinks of universities as a place where you might keep one foot, but never both feet. The other foot, he was convinced, needed to be in private industry, or the public sector, or the non-profit community. The university, in his view, suffers from the ivory tower syndrome, and he set out to fix it.

So Bill stepped down from the Provost position to make a mark in a few other places. He became President and CEO of SRI, where he opened that institute up to the Pacific Rim, created their spin-out and commercialization program, and established the Sarnoff Corporation as a for-profit subsidiary.

“If Joint Venture were a person, it would be Bill Miller, or at least aspire to be like Bill Miller”

His influence quickly spread overseas, where he advised companies and even governments in China, Taiwan, Australia, Japan, Malaysia, and Sweden. He has been awarded the Okawa Prize in Japan the Dongbaeg medal from the Republic of Korea, and he is an honorary professor at Zhejiang University in Hangzhou, China.

Meanwhile back at Stanford, he became co-director of the Stanford Project on Regions of Innovation and Entrepreneurship, a group of researchers who study the Silicon Valley phenomenon and the numerous attempts to replicate it. He still holds this position, and at age 82 still logs a few hundred thousand frequent flier miles speaking to overseas groups who want to do what Silicon Valley is doing.

But it could be that his most lasting impact will come from his entrepreneurial activity, particularly as founder and chair of his two most recent companies, Nanostellar and Lumiette. Both companies are in Silicon Valley’s hottest emerging area, clean technology and alternative energy solutions. Nanostellar, a company using nanotechnology to reduce exhaust emissions, was named a 2008 Technology Pioneer by the World Economic Forum at Davos. That is no small thing, considering past Davos winners included Google and Napster.

And so you get the picture by now: Bill Miller has done it all: founder of world-changing companies, pioneer of the modern venture capital industry, government advisor, distinguished scholar.

But Bill and Pat Miller have always been involved with conserving wildlife. Most notably they have worked with the Cheetah Conservation Fund where Bill is a trustee of the USA chapter. On one of their many trips to Africa, Bill photographed the Fund’s “mascot,” Chewbacca in Namibia.

The Packard Award is reserved for those rare individuals who leverage their expertise and relationships to make Silicon Valley a better place, specifically by reaching across boundaries to solve complex problems.

This describes Bill Miller. It is as if all of his industry experience, academic expertise, organizational savvy and financial wisdom were tools in his toolkit, tools he pulled out again and again to shape the evolution of Silicon Valley as a technology region, and to help solve some of its most significant challenges.

He has done this most effectively in the NGO and non-profit realms, but also by serving on important boards and commissions:

Believe me, these are only a few of the groups he has founded, chaired, or influenced. The list goes on and on.

Bill would go anywhere to talk about Joint Venture and sold the concept with a passion.

But I’ll conclude by highlighting the crucial role he played as one of Joint Venture’s founders, back in 1993. It was a risky thing, starting a non-profit that many thought had a nebulous mission. But Bill was convinced Silicon Valley needed a place that brought together every sector of the community, a place where barriers would be broken down and innovative solutions would emerge. He was especially concerned that the solutions would embrace technology, and push the technologies we invent farther and deeper to solve community problems.

I asked Becky Morgan what she remembers about working with Bill in the early days of Joint Venture. Her comment was that Bill would go anywhere to talk about Joint Venture and sold the concept with a passion. What Joint Venture has become is a testament to his vision and his leadership.

In fact—and here is how I will conclude—Joint Venture has in reality grown up to be a non-profit version of Bill himself. If Joint Venture were a person, it would be Bill Miller, or at least aspire to be like Bill Miller: multi-faceted, complex, adroit, the sum totaling far more than the individual parts.