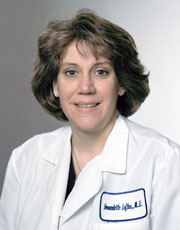 On the wall behind Dr. Bernadette Loftus’ desk hangs a poster-sized photo collage of her in three different snapshots – one with Permanente Medical Group CEO Dr. Robert Pearl, another standing beside Governor Arnold Schwarzenegger and a third of her embracing a colleague’s husband decked out in full Elvis Presley regalia.

“Three men in my life that I call Kings of Quality,” she says, gesturing to the frame with an outstretched arm and a wide smile. “Dr. Pearl, my boss, is the ‘king’ of the medical center and a mentor to me; Arnold is the ‘king’ of California; and everyone knows Elvis as ‘The King.’

“My co-workers presented this to me as a gift to recognize the improvements in the quality of care we have achieved here. In their own way, these men all symbolize quality.”

“I was honored when Joint Venture asked me to join their board because of the very important work they were doing in the health care arena.”

Indeed, it’s a fitting connection to the professional and personal standards of Dr. Loftus, Physician-in-Chief of Kaiser Permanente’s sprawling Santa Clara Medical Center and a member of the Joint Venture Board of Directors.

In her association with Joint Venture she has participated on the Smart Health Task Force, hosted board meetings and assisted with health-related panels at the annual State of the Valley conference.

“I was honored when Joint Venture asked me to join their board,” she said, “because of the very important work they were doing in the health care arena.”

In her present role since 1998, Dr. Loftus oversees medical services for more than 330,000 Kaiser Permanente patients throughout the region and a staff of 585 doctors, the latter number having doubled under her watch and nearly triple that of ten years ago.

She was instrumental in the conception, planning, design, construction and startup operations of the $750 million, 1.4-million-square-foot medical center she overlooks from her fourth-floor office on the campus.

“It’s a huge sense of accomplishment,” she says of the process that culminated late last summer. “Moving in hundreds of patients and everything that goes along with relocating a major facility is an enormous undertaking, and there are still a few kinks. Even if you’re just moving your home you still end up misplacing a box somewhere.”

The analogy is apt because the campus has become a professional home to Dr. Loftus, who began her career as a head and neck surgeon but gravitated to the administrative side because she was drawn to the notion of providing quality care for thousands of patients collectively rather than one at a time.

“My mother was a nurse and my father was an engineer, and I went into medicine because I thought I wanted to cure cancer. It seemed simple. I figured if you had something bad inside of you I could just cut it out.”

Sitting at a small conference table, she gazes around her office at the clutter of memorabilia - photos, plaques, coffee mugs, inspirational quotes by the likes of Disraeli, Dr. Martin Luther King, Jr., Eleanor Roosevelt and others.

She points out a picture of her favorite cow from her grandfather’s farm. It’s clear she is a long way from her original home, and not just geographically.

“I came to California as a reluctant trailing spouse when my husband was recruited to a job here, but I soon fell in love with the mission of Kaiser. There is nothing like it on the East Coast.”

When she became the elected representative to the board at KPMG in 1996, she said, “it opened up a whole new world, the world of health care policy and improving the quality of care on a larger scale. I became fascinated with the idea that you could put policy into action. It was a breath of fresh air.”

Dr. Loftus earned her undergraduate degree in biochemistry at the University of Pennsylvania and her M.D. at the Case Western Reserve University School of Medicine in Cleveland. She performed her residency with the Columbia University College of Physicians and Surgeons in Otolaryngology and Head and Neck Surgery.

“I still maintain a small practice today, but I traded most of it in for administration – something I never dreamed I’d wind up doing,” she confessed.

“She is very focused, driven by excellence and devoted to her job,” said Dr. Murphy. “I really appreciate her passion and involvement in understanding what it takes to make the medical center the best that it can be.”

Dr. Murphy added that Dr. Loftus is not only “remarkably attentive to detail and has a phenomenal memory,” but that she excels at debating and negotiating, and possesses a vocabulary that frequently sends Dr. Murphy to the dictionary. “The other day she used the word ‘pusillanimous.’ I had to go look it up.”

She did not say in what context Dr. Loftus used the word, but it certainly could not have been in reference to herself. The definitions of “cowardly,” or “lacking in courage or resolution” hardly apply to Dr. Loftus, who is seen by many of her colleagues and others in the community as indefatigable in her pursuit of quality health care in the community.

Among her accomplishments in connection with the medical center project, she added such new clinical services as radiation oncology and cardio-vascular surgery, oversaw major improvement in member in-patient and out-patient satisfaction measurement, and led the implementation of a highly successful e-consult/direct scheduling access system.

She also elicited and aligned leadership support at multiple levels to acquire a donation of land on the medical center campus for construction of the JW House – housing for families of long-stay patients – the first facility of its kind for Kaiser Permanente.

She has been a member of the Santa Clara County and California Medical Associations since 1991, and since 2001 she has been a clinical assistant professor in the department of otolaryngology/head and neck surgery at the Stanford University School of Medicine.

“She’s brilliant, one of the more intelligent people in our medical center,” says Dr. Mark DuLong, the assistant physician-in-chief and chief of plastic surgery for the Santa Clara facility. “What she does takes a wide range of talents that most people don’t have.

“We need to inspire and motivate people about the future. And I have to learn which battles to fight, what phrases and code words to use in order to get things done.”

“Key among them is communication – she knows how to keep her audience in mind when she is speaking. Over time I have become more and more appreciative of how many things she has to deal with in her current role. And she does them with good humor and poise.”

Dr. Loftus acknowledges that her field and her individual role both require political savvy and the courage to voice opinions and build consensus.

“We need to inspire and motivate people about the future. And I have to learn which battles to fight, what phrases and code words to use in order to get things done.”

While Dr. Pearl, the governor and Elvis may be Kings of Quality to her, there are three other more significant men in her life – her husband, Marty McKenzie, now a physics and chemistry teacher at Bellarmine Preparatory School in San Jose, and her sons, Tim, 18, a freshman at the University of Pennsylvania in Philadelphia, and Connor, 14, a freshman at Bellarmine.

“They are the three most important men in my life,” she says. “Being a parent is the most rewarding job I have ever had, and I try to be involved in the boys’ lives as much as possible.”

When she has time, Dr. Loftus finds joy in gardening around their Los Altos Hills home and is a voracious reader, which may help explain all those big words.

But one word that means a great deal to her is quality. In fact, if one were to ask Dr. Pearl, the governor or any number of other “kings of quality” in her circle, they might say they think of Dr. Loftus as a “Queen of Quality.