In today’s high speed connected world, it’s easy for us here in Silicon Valley to think of wireless communication beginning as a 20th century technology developed by American telecom companies.

Not only is that wrong on both counts, it’s off by a century and two oceans.

“It’s not magic, it’s just radio,” says Katherine Van Diepen, who heads global marketing communications for the Japan-based Anritsu Company and has recently joined the steering committee for the Wireless Communications Initiative at Joint Venture. “Only the technology is getting smaller and faster.”

In many ways, wireless communication today is the modern equivalent of what the so-called father of radio, Italian inventor Guglielmo Marconi, started in the late 19th century.

In fact, Van Diepen’s company, Anritsu, was founded in 1895, the same year Marconi successfully demonstrated the world's first wireless telegraph. “We helped build the wired network,” she says. “Anritsu originally made the first wireless communication transmitter in 1903 and later in 1908 launched the first public wireless telephone.”

Anritsu is a $1.2 billion company with 4,000 employees and customers in more than 90 countries. In the U.S., it has one manufacturing plant and 800 employees, 500 of them in Morgan Hill, where Van Diepen is based.

“We serve the entire wireless ecosystem,” says Van Diepen, “Testing components for cell phones, characterizing Wireless chips, testing equipment for everything from the components in the handsets, to the base station and towers and including a full line of R & D Benchtop Test Instruments”

“Japanese culture tends to be more consensus based and collaborative, and Joint Venture is the same way,”

With all of the major global carriers among its customers, Anritsu provides wireless, optical, microwave/RF and digital test instruments as well as operations support systems for R&D, manufacturing, installation and maintenance.

“Our biggest push now is toward 4G LTE, (long term evolution), the wireless standard for a faster network,” says Van Diepen. “We have to keep up with the explosion of phones and tablets.”

Another important facet of Anritsu’s business is public safety – working with government agencies to help maintain quality networks for connecting police, fire and other first responders in emergencies and keeping communications open.

“We helped rebuild communications after the Fukushima quake,” says Van Diepen. “Bringing people together to help, that’s part of our culture. Corporate Social Responsibility and being part of the community is very important to the company.”

“Japanese culture tends to be more consensus based and collaborative, and Joint Venture is the same way,” she says. “What interests me is working with local cities and state agencies on getting wired and connected.

“Being able to partner with Joint Venture and its members to achieve that will help the Silicon Valley economy. And because Silicon Valley is at the leading edge with so many forward-thinking companies, it is watched all over the world.”

Natasha Ernst, who became director of the WCI last year after three years on the steering committee, says she is working to diversify the effort by recruiting a broader group of wireless-related companies.

“Anritsu is the first of our successes because they have an interest in more and better wireless networks even if they are not end-user service providers,” says Ernst.

“Of all our clients, I’d have to say Katherine is the best to work with because she is very prepared,” said Patrick Brightman of New Jersey public relations agency 3EPR, who has worked with Van Diepen on the Anritsu account for 15 years.

“She really puts together a plan of action with goals and objectives so we can do our job. And she’s always challenging us in a good way. She wants to catch that wave at the very beginning and ride it all the way,” added Brightman.

“She really puts together a plan of action with goals and objectives so we can do our job. And she’s always challenging us in a good way. She wants to catch that wave at the very beginning and ride it all the way,” added Brightman. 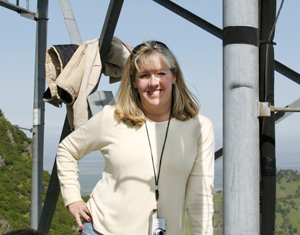 Van Diepen was born to Navy engineer Bill Weihrouch and his wife, Anna, in the small Wisconsin town of Chippewa Falls, 100 miles east of Minneapolis. Katherine, her twin sister and her two older brothers grew up in Campbell.

She attended Westmont High School, where she first recalls developing her interest in communications. She earned her BA in communications at San Jose State University and began her career selling broadcast equipment and digital video editors.

“I wanted to get into a growing industry,” she says. “I could see a future in wireless and in 1998 I answered an ad in the paper for a position at Anritsu.” She has been there since, rising to her current position in 2002.

“I have traveled to every continent and I go to Japan twice a year,” she says. “It’s been a great experience.”

“She really puts together a plan of action with goals and objectives so we can do our job. And she’s always challenging us in a good way.”

While living in Capitola in 2001, she met Tom Van Diepen at a blues concert and later found out he lived around the corner from her. They were married in 2002. Tom is a quality engineer with Fox Racing Shox in Watsonville, and the couple now lives in Scotts Valley with their Airedale, Buster.

“Tom is the youngest of nine kids, so we have tons of family around,” says Katherine. “We like to do a lot of things outdoors – garden, mountain bike, surf, ski, hike.”

“I met Katherine in a walking program at Stanford ten years ago and we hit it off immediately,” says her personal friend and business associate Tammy Henderson, a marketing data consultant based in Boulder, Colorado.

“She is really easy to get to know, very open and friendly. We love to go wine tasting with our husbands, and she loves nature. She has a huge organic garden and eats very healthy.

“I’ve also done a lot of work with her. She’s a very clear-minded marketer who knows what she wants to accomplish. She is very articulate and so knowledgeable about the whole marketing space.”

In addition to all of their favorite outdoor activities, Van Diepen and her husband love baseball. “We're huge Giants fans,” she says.

She also has a personal interest in the new Levi’s Stadium in Santa Clara because Anritsu is working with the NFL to make sure Levi’s Stadium’s wireless network performs correctly for the game communications.

To ensure connectivity for more than 65,000 fans, the stadium will have twin 10-gig Ethernet fiber lines.

Those are much bigger pipes than Marconi had to work with. But then, as Van Diepen reminds us, it’s not magic, it’s just radio.