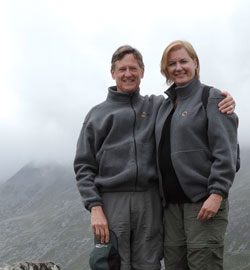 Solar energy entrepreneur Tom McCalmont was still a college student and didn’t realize it at the time, but the abundant California sunshine sent him a message about his future on a crisp January day in 1975.

While his Ohio college was in the throes of a classic midwestern winter, McCalmont came to scout Stanford University for grad school. He distinctly remembers that first ride up majestic Palm Drive under the canopy of the trees after a morning rain.

“The skies were clearing and the trees were glistening in the sun, with raindrops sparkling off the leaves like diamonds,” says McCalmont. “I thought to myself, I’ve left the Midwest and arrived at the gates of heaven. I came back the next year for school and I’m still here.”

After Stanford McCalmont worked in the computer industry for a time, but today he and his wife, Darlene, run their own company designing large-scale solar plants around the globe.

McCalmont also joined the Joint Venture board of directors in 2008 to work on the Climate Prosperity Council and now contributes his time and expertise to the Smart Energy Enterprise Development Zone (SEEDZ) initiative.

“Energy and renewables aren’t like traditional Silicon Valley tech businesses,” he says. “We can’t be an island unto ourselves. We have to engage with utilities, with local building departments, and with the state and federal government. Therefore, collaboration is essential for the growth of our industry.

“What I like about Joint Venture is the public-private partnership aspect of it. When you get all these people and diverse groups together in the same room, you create opportunities for conversation and they start to understand each other’s points of view.”

“What I like about Joint Venture is the public-private partnership aspect of it. When you get all these people and diverse groups together in the same room, you create opportunities for conversation and they start to understand each other’s points of view.”

McCalmont Engineering, based in Campbell, has designed and installed solar energy systems in many states around the U.S. and in foreign countries, including India, Mexico, and soon in Guinea-Bissau in western Africa.

Currently the company is developing an 18-megawatt system at Fort Detrick, Maryland. The sprawling Army base’s website home page proclaims it “A Sustainable Community of Excellence.”

“The cost of delivering gasoline to forward military operating theaters such as Afghanistan is $400 a gallon.  The federal government has discovered it is much cheaper to provide local power to those remote locations via solar, so it’s been on a push over the last decade for more renewable energy, both abroad and at home,” says McCalmont. “Fort Detrick is deploying 60,000 solar panels on 100 acres of unused land. There’s an environmental benefit from reducing the need for fossil fuel as well as a cost savings due to lower electric rates from solar.”

Projects of this size can take up to two years from awarding of the contract through design to installation, says McCalmont.

In Silicon Valley the company has been involved in a number of projects for the Renewable Energy Procurement partnership between Santa Clara County and Joint Venture.

“My frame of reference for the growth of the solar industry was my prior experience in the computer industry,” says McCalmont. 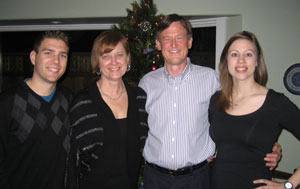 “In 1979 there were just 10,000 personal computers in the world. By 1989 there were 100 million PCs, and by 1999 there were over two billion. The solar industry over the last decade has experienced that same sort of exponential growth.  Starting in 2001, I morphed my career from computers to solar, thinking it would either be the worst mistake of my life or the best decision I ever made. It turned out to be the best.”

McCalmont launched his first company, REgrid Power, in 2002 and within seven years it had reached $20 million in sales, with 80 employees and over 2,000 solar power systems installed.

Concurrently in 2006, he cofounded with the Silicon Valley Leadership Group a nonprofit industry consortium called SolarTech. Its mission was to tackle and reduce barriers to wider adoption of solar power by working in concert with solar manufacturers, integrators, utilities, workforce boards, building departments, and financing organizations.

“The industry needed people with different perspectives to work together, and I’ve always had an interest in and a commitment to community,” he says. “That’s another reason I like working with Joint Venture.”

“The first thing about Tom is that he’s pleasant and easy to work with,” said Paul Detering, the interim CEO of REC Energy in San Luis Obispo who has worked with McCalmont on SolarTech for the past six years. “He thinks beyond the short term and sees what the solar industry needs to do.

“I can always rely on him to think things through. He goes beyond what most people would do. He has a strong sense of following through on commitments and getting things done.”

By 2008, as prices were falling and the economy was heading into recession, McCalmont sold REgrid to Real Goods Solar, remaining on the board for a year before starting McCalmont Engineering.

He didn’t have to look beyond the kitchen table at home to find his business partner in the new venture.

Tom first met Darlene Hinerman in the fourth grade. They dated in high school, then attended different colleges and went their separate ways for several years before reuniting in Silicon Valley.

“I’ve seen Tom evolve from a small business owner to being truly dedicated to making the entire industry better. He has a true vision and a commitment for where he would like to see the industry grow, to make it better.”

“I’m in the customer facing role,” says Tom. “Darlene works on product delivery, so our two roles have little crossover or conflict.”

“I have high respect for Tom and Darlene,” said solar market research analyst Paula Mints. “We’ve all known each other since back in REgrid days working on the front lines building businesses from the ground up.

“I’ve seen Tom evolve from a small business owner to being truly dedicated to making the entire industry better. He has a true vision and a commitment for where he would like to see the industry grow, to make it better.”

McCalmont was the oldest of four children born to David McCalmont, a Presbyterian minister, and his wife, Ruth. From Tom’s birthplace in Pittsburgh, the family moved to Iowa and upstate New York before settling in the small town of Carrollton in eastern Ohio when Tom was ten.

After graduating from Stanford in 1979, Tom spent eight years with Cromemco, an early stage company known for its high-end Z80-based S-100 bus computers. There he worked in all aspects of software engineering, operating systems, and applications. 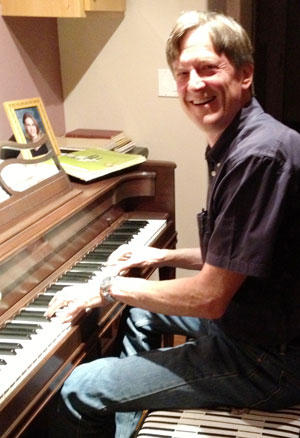 He left Cromemco for a Chicago consulting job – “I call it my period of temporary insanity,” he says – and returned to Silicon Valley in 1988 to work in telecom and VOIP, developing call center technology. He holds 13 U.S. patents, most from that period.

Finally, he and Darlene co-founded REgrid Power in 2002. They live in Palo Alto and have two children, Stacey, a teacher of special needs students, and Aaron, who works as an engineer in their company.

Tom plays the piano every evening for pleasure and enjoys reading the classics, historical nonfiction and, naturally, anything and everything on energy and climate change.

Getting away together is difficult when both are running the same company, but Tom and Darlene enjoy traveling, biking, cooking, and music.

They’re never away from home for very long, though. After all, this is heaven.