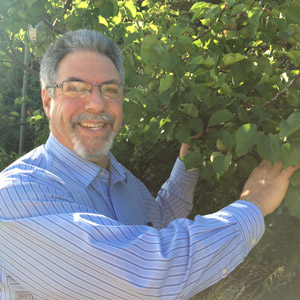 Governor Jerry Brown drew national headlines recently for talking about what people like Kim Springer have dedicated much of their careers to for years – that California is the “epicenter” of addressing the impacts of climate change.

“Humanity is on a collision course with nature,” Brown told scientists at a conference in Sacramento on how the drought is impacting state agriculture.

“In California,” he said, “we're not only adapting, but we're taking steps to reduce our greenhouse gases in a way that I think exceeds any other state in the country. And we'll do more.”

“It’s shocking how much has changed in the past few years,” says Springer, the resource conservation programs manager for San Mateo County and the new co-chair of Joint Venture’s Public Sector Task Force.

He began his county role just a few months after the passage of California’s Global Warming Solutions Act of 2006, commonly known as AB 32.

“Back then, we had to be careful about pushing for goals that were too aggressive. By 2008, cities felt we hadn’t gone far enough. People’s attitudes changed radically. Now there are economic drivers to compete by being green.”

"He comes up with solutions that are refreshing and innovative and then he follows through. He’s a great person to work with."

He is also contracted to the City and County Association of Governments (C/CAG) for energy efficiency, water conservation, climate action and solid waste planning.

“A lot of small and medium sized cities don’t have the resources to work on climate action,” says Springer, “yet they’re under pressure from constituents and elected officials to do it. It’s more efficient if we work together.

“In the long run, the situation is somewhat dire,” he adds. “Sea level will rise and San Mateo County is the most vulnerable county in the state, getting it from both sides.”

“Kim comes across very calm and thoughtful,” says Sandy Wong, executive director of C/CAG, who works closely with Springer on the Energy Watch Program and other projects.

“One of his strong points is that he has a global picture but also figures out how the pieces fit in. He’s not your typical public agency employee. He comes up with solutions that are refreshing and innovative and then he follows through. He’s a great person to work with.” 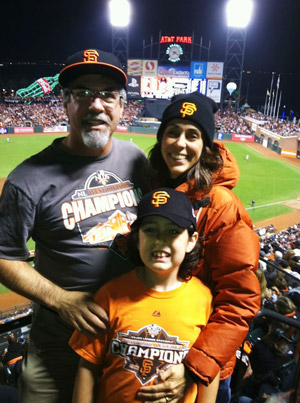 The tools include a users guide, a Climate Action Plan (CAP) template, proposed measures including calculations and selection guide, and an online forecasting, targeting, calculating and tracking tool.

“We developed RICAPS to help our cities contribute to meeting the goal of AB 32 to reduce greenhouse gas emissions to 1990 levels by 2020,” says Springer. “It’s designed to drive cities to commit to initiatives they have control over and can affect change in. It gives cities the freedom to choose their goals while informing our countywide coordination on what to focus on.”

The Joint Venture connection “is a welcome resource,” says Springer.

“There’s a lot of value for the larger regional effect they bring to the table. Joint Venture is great at pulling events together. It helps us put on timely workshops where we can learn from each other and learn together.”

A new initiative of Springer’s is the RecycleWorks Volunteer Academy, created to provide educators, courses and other information for residents about conservation, recycling and other tactics.

The academy began in late May with Resource Conservation 101, a three-hour foundational course about waste reduction and recycling, energy efficiency, water conservation and pollution prevention. Students who complete the course and 10 hours of volunteering can earn a certificate and help their county get the word out.

"There’s a lot of value for the larger regional effect they bring to the table. Joint Venture is great at pulling events together. It helps us put on timely workshops where we can learn from each other and learn together."

“Kim brings great passion and enthusiasm for the projects he’s working on,” says Springer’s supervisor, Joe La Mariana, the solid waste and environmental services manager for San Mateo County. They’ve been working together for 11 years, dating back to their previous roles with BFI (now Republic Services).

“He has a knack for finding workarounds,” added La Mariana. “He’s very collaborative, with a great eye for recognizing program partners.”

Springer acquired his interest in nature and conservation at an early age, growing up “in the trees” in Woodside. He and his brother and two sisters were the children of furniture maker Ric Springer and his wife, Gerda, a vocational rehabilitation counselor, both retired from the County of San Mateo.

“My parents were both survivors of the Holocaust era,” says Springer. “We lived in the forest above Woodside, where I learned to make furniture from my dad, worked on construction projects and hiked through the woods to meet my friends. We were bussed to school in Portola Valley and then to Woodside High School.

“Other than singing a lot and taking science classes all through school, I didn’t know what I wanted to do afterward. I studied electronics, designed performance engines, and went to Cal Poly in San Luis Obispo. I got my business degree in industrial technology.” 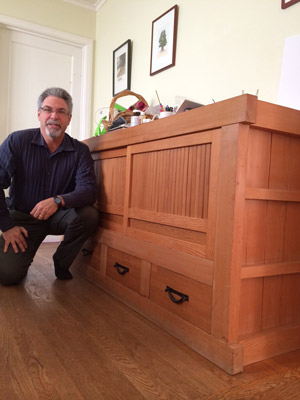 “I was always environmental and entrepreneurial,” he says. He started and ran his first company, an environmental toner cartridge and printer repair service in San Carlos, for 12 years.

Next he launched Second Growth IndusTrees, making Japanese tansu-style furniture using such sustainable materials as recycled Douglas fir. “Woodworking is an exercise in process,“ says Springer. “You have to ‘see’ the end product and preplan every operation to realize the final piece.”

Springer had other work experience at Kaiser Aerospace, Hewlett Packard, NASA Ames and FMC Corp. From 1998 to 2002 he chaired the Sustainable San Mateo County Business Task Force and was vice-chair of SSMC’s board.

In 2001, he became program management specialist for construction and demolition programs with J. Edwards and Associates, serving San Mateo, Burlingame and Hillsborough. 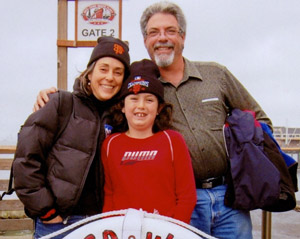 In 2001, Kim began dating Denise Huajardo, a Burlingame woman he had met earlier at a friend’s birthday party. They married a year later and had a son, Nate, in 2003.

At about the time they met, Denise had been having vision problems in one eye, leg weakness and suffered from periods of extreme fatigue.

Doctors misdiagnosed her with multiple sclerosis, says Springer, but it later turned out she had Lyme disease, an ailment contracted most likely through a tick bite.

“It’s been difficult for all of us,” says Springer, “but we managed to pull our lives together.”

Outside work, Springer enjoys gardening and woodworking and is designing a lightweight hybrid electric vehicle.

“I like to do things for personal growth,” he says. “I stay on top of new technologies and climate issues. I’m constantly thinking of ways to inspire more valuable approaches to everything we do.”

On that front, he may even be a little ahead of the governor.