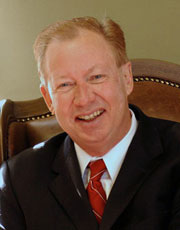 President, Menlo College and Joint Venture Board of Directors

Ask Menlo College President Tim Haight how he got involved in higher education and you might expect him to credit an inspirational role model or a lifelong dream. But you would be wrong.

“Blame it all on a kidney stone,” says the Joint Venture board member, a cheerful redhead with smiling eyes and an engaging grin. “That changed everything.”

But even before that, there was the awkward matter of flunking first grade.

Raised in the District Heights neighborhood of Washington, D.C., where his mother was an aide to Senator Robert Taft and his father was a grain inspector for the Agriculture Department, young Tim got off to a poor start in elementary school. Not because he was dyslexic and hearing impaired, but because he was left-handed.

“Back then we all were required to write right-handed,” he recalls. “I couldn’t do it. Whenever the nuns turned their back to me, I would switch. But I couldn’t hide the evidence. One day a teacher saw the ink smudges on my left wrist and knew I had been writing with it.

“I realize now that nuns were the first forensic scientists,” Haight says with a wink and a pause for effect. “They didn’t miss a clue. She failed me right there and I had to go back and take first grade over again. I think I am probably the only college president in the country who failed first grade.”

By excelling at math, however, Haight managed to overcome these early setbacks, but he was a chronically poor student who finished at the bottom of his high school class. He was prepared to go to work in his uncle’s sheet metal business, but because his parents urged their children to try college for at least a year, he agreed to go and enrolled in the University of Dayton in Ohio. One year became two, then three, then four. “I actually liked it, and I kept going.”

Somehow he got through his undergrad years in spite of his dyslexia – “I’ve probably written more books than I’ve ever read” – and graduated with a degree in business administration in 1970. Without a specific career goal, he ventured briefly into retail as a buyer, but soon decided it wasn’t for him and he returned to Dayton for his master’s degree. His objective was to finish in nine months, and he was right on track, until...

“That’s when I got my first kidney stone. I’ve since been hospitalized 15 times for the problem. My father had them and now my daughter is getting them. Anyway, I had no medical insurance and it wiped me out, so I had to quit school, even though I had finished 21 of the 30 hours I needed.

“On the way out I dropped by to say goodbye to my finance teacher. When I explained why I was leaving, he said, “Would a scholarship help?” And that’s how I was able to finish my MBA in accounting and finance.”

From there Haight launched a career in business and financial services and at the same time joined the faculty at Towson University (now Towson State University) in Baltimore. “I thought, wow, this is the only field I know where they pay you to learn, and I knew I wasn’t going to be a theoretician,” he says.

“I thought, wow, this is the only field I know where they pay you to learn, and I knew I wasn’t going to be a theoretician.”

Haight soon enrolled at George Washington University to earn his doctorate in business finance and investments.  In 1976, while working on his DBA, Haight met and fell in love with his next door neighbor, Ann, whom he married in 1981. The couple has a son, Tim, currently studying for his doctorate in accounting at the University of California at Irvine, and a daughter, Stephanie, a recent graduate of UC San Diego. Ann’s son from a previous marriage, Jason, lives in Maryland.

During his career in academia, Haight has taught a variety of courses in financial management, investments, securities, analysis, financial research and corporate finance. In addition to Towson, he taught at the University of Baltimore and Loyola College, wrote several books and dozens of papers, held department chairs, served on numerous board and committees and earned countless honors.

For the longest time he had “no interest” whatsoever in administration, but in 1998 he accepted a position as Dean of the College of Business and Economics at California State University, Los Angeles. At the time, he knew no one in L.A. and few people in California.

“All I have ever wanted to do is learn,” he says. “A plant needs to be re-potted to grow.”
At Cal State LA he developed a new strategic plan for the business college, designed a faculty incentive system, raised millions of dollars in corporate contributions and managed more than 100 faculty and staff. After more than eight years there, Haight left to become the eighth president of Menlo College, taking over officially on January 1, 2007.

“A CSU can only do so much,” he explained. “Menlo has two things that were very attractive to me: its location here in Silicon Valley – the heart of innovation and technology – and amazing group of alumni who have defined a rich history and tradition.”

Haight sees his primary goal as president of Menlo to “prepare students for jobs that do not yet exist.” In a rapidly changing economic and business environment, he says, today’s student can ensure success by acquiring several important attributes in addition to the curriculum. These are entrepreneurship, innovative conceptualization, superb communication skills, critical thinking, strong team orientation, adaptation, multiculturalism, ethical behavior and social responsibility.

“My job is simple,” says Haight. “It’s to create sparks on campus that ignite the imagination of our students. I’ll be successful if companies are knocking down our doors to get our students.”

It was with that goal in mind that Haight readily agreed to join the board of Joint Venture last summer at the urging of Menlo alum and current Joint Venture co-chair Harry Kellogg, a longtime Menlo board member who led the search committee to find the college’s new president. “Of the hundreds of candidates the committee reviewed, Tim was by far the number one choice,” said Kellogg. “He had the business background as well as his academic experience, and he saw the opportunity to grow Menlo and to connect with the businesses in the valley, something the college has never really done as a choice.”

Kellogg said Haight is so committed to Menlo’s success, he and his wife, Ann, often take walks around the campus at dawn just to make sure everything is in place and running smoothly.

“My job is simple. It’s to create sparks on campus that ignite the imagination of our students. I’ll be successful if companies are knocking down our doors to get our students.”

Once Haight acclimated to his new role and his new home, Kellogg said, he quickly inquired about the best way to get involved with the Silicon Valley, “to be part of the ecosystem.”

“The first organization out of my mouth was Joint Venture,” Kellogg said. “It is part of the heartbeat of Silicon Valley, involved with business, cities, education, the unions. There’s no other organization like it. He grasped that immediately and jumped right in.”

“My ‘customers’ are the business community,” says Haight. “I like to think of Menlo College as the ‘Silicon Valley Business School.’ I would like to have Silicon Valley adopt Menlo College as a partner to supply the workforce of the future. And I felt that Joint Venture was the ideal organization for me to work with to make that a reality.”

Haight currently oversees a faculty of 33, but that number will soon swell to 40. Of the current enrollment of more than 600 students, 18 percent come from Hawaii, 12 percent from international locations and the remaining 70 percent from the intercontinental U.S., primarily the Western states. Of some 1000 applicants each year, about 200 are accepted.

Haight serves on numerous other boards, professional organizations and community groups that include the NASD Board of Arbitrators, Beta Gamma Sigma, Omicron Delta Kappa, the Financial Executives Institute, the Southern California Edison Nuclear Power Decommissioning Fund Committee and chairman of the board of the Commonwealth Business Bank.

With his extensive background, experience, knowledge and energy, Haight stands to leave an indelible impression on Menlo College and on Silicon Valley. Knowing him, it’s a safe bet that not even another kidney stone could change that.