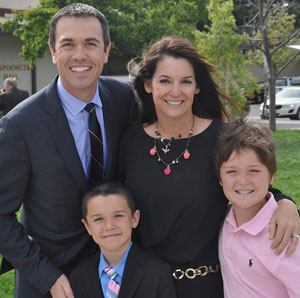 If Jeff Hamel has his way, the new 48-station electric vehicle charging center going into the Tasman Parking Garage next door to the new Levi’s Stadium will add one more plug.

“We’re working on a way to get that 49th station,” says Hamel, an executive with the Electric Power Research Institute in Palo Alto and a Joint Venture board member.

EPRI and Joint Venture’s SEEDZ initiative are partners with the city of Santa Clara, ChargePoint and MJR Electric in the $469,000 project adjacent to the new home of the San Francisco 49ers, the Santa Clara Convention Center and Great America theme park.

Collectively, these venues are expected to attract more than 4.5 million visits a year, putting a premium on EV charging spots.

“The real challenge now,” said Hamel, “is how to scale the infrastructure for customers given the rapid adoption of electric vehicles (EVs), especially here in the Bay Area. How do we ensure people who travel a great distance have a spot when they arrive? We need a reservation system that would ease any potential anxiety of electric vehicle owners who may want a charge when visiting the venues.”

“We’ve been laying the groundwork for EVs for more than 10 years,” he says. “Now the focus is shifting to integration of distributed energy resources, such as renewables and storage, and how utilities can best integrate these resources into operations. Storage will be a big focus and California will set the tone for the rest of the market.”

EPRI is an independent nonprofit institute that conducts research, development and demonstration relating to the generation, delivery and use of electricity for the benefit of the public.

“Joint Venture gives us the opportunity to provide information to new stakeholders, while at the same time we get information from other organizations about where they’re going. It’s exactly what we need.”

EPRI was founded after the Great Northeast Blackout in 1965 left 30 million people without power, raising awareness on the nation’s dependence on reliable electricity.

Its work spans nearly every area of electricity generation, delivery and use, management and environmental responsibility. Annual funding is around $400 million.

“EPRI is a full-contact sport,” says Hamel. “We roll up our sleeves and engage with utilities, academics, vendors, environmentalists, and other stakeholders. We bring together people around common challenges and issues. We’re global in the way that Joint Venture is regional.”

“Bryan was one of the founders of SEEDZ,” Hamel says. “I saw the project as an introduction to the ecosystem here in the valley; an opportunity to engage with local leadership.”

“Joint Venture gives us the opportunity to provide information to new stakeholders, while at the same time we get information from other organizations about where they’re going. It’s exactly what we need.”

Hamel’s duties with EPRI include leading his 10-member team in developing, securing and growing broad collaboration with global utilities, government agencies and other stakeholders.

He’s also EPRI’s liaison to the State of California and State of New York’s clean energy research and innovation programs, and to the California Electric Program Investment Charge (EPIC) engagement.

“Jeff has great strategic vision,” said Rob Chapman, EPRI’s vice president of member and technical services. “He dreams big and thinks about what the future holds.

“He’s also a doer, not a talker. That’s a great asset. He has great relationship skills and a high energy level. His sense of enthusiasm is contagious.”

Before joining EPRI in 2007, Hamel worked at General Electric for 8 years, and was responsible for managing and leading new growth for GE’s nuclear business. He also supported the commercial development of new nuclear power plant projects domestically and internationally.

In 2000, he spent two months in Japan at the Fukushima nuclear plant, where 11 years later a major earthquake caused a tsunami that brought about catastrophic failure and resulted in the meltdown of three nuclear reactors at the seaside plant.

“Jeff first and foremost has a sense of optimism and confidence without being cocky.”

“In fact, it was the night before I left for Japan when I first met my wife in downtown Palo Alto,” he recalls. Then a high tech public relations practitioner, Danielle and Jeff hit it off immediately.

She is now senior director of corporate communications for Juniper Networks, and the couple has two sons, Jack, 11, and Chase, 8 and live in Los Altos.

Hamel was born in Holyoke, Massachusetts, a paper mill city also known as “the birthplace of volleyball” in 1895 and home to the Volleyball Hall of Fame.

His father, Fran, worked in finance for the Spalding Sporting Goods Company and his mother, Pat, is a co=owner of a family custom machine shop. Jeffhas one sister, Jen, a teacher.

“Growing up there with my dad at Spalding was like having a Sports Basement in your own basement,” says Hamel. “I played a lot of golf as a boy and we even won the state high school golf championship when I was at Holyoke High School in 1994.”

Jeff also loved skiing and sailing, and when it came for college it was a natural choice to enroll at the Massachusetts Maritime Academy. 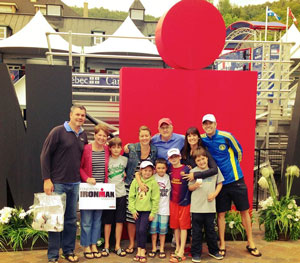 “It’s a very good school, structured and disciplined,” says Hamel. “I was planning to be a Merchant Marine. I needed one year of sea time for my Coast Guard license and I had the opportunity to travel to Europe, the Caribbean, South America and Asia.”

“Jeff first and foremost has a sense of optimism and confidence without being cocky,” said Jon Poor, Hamel’s college roommate and former co-worker, now with National Grid, an investor-owned utility based in Waltham, Massachusetts.

“He always sees the upside or the opportunity in most things,” added Poor, who was the best man at Hamel’s wedding and who worked with him at both GE and EPRI. “People want to work with him. He has the ability to inspire and energize people. It’s an intangible natural talent.”

“He’s one of my best friends. If I’m having a challenge, Jeff is the first person I think of to call. We always have the ability to pick up where we left off.” 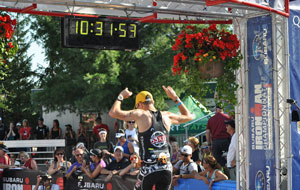 A few years ago, Hamel got into running and eventually to marathons and triathlons. He recently competed in his third Boston Marathon and has competed in two full ironman triathlons, five death rides, four “Escape from Alcatraz” triathlons, and an ultra 50K.

“Two years ago in Boston I finished a few hours before the bombings,” says Hamel, who runs a sub 6-minute mile. “I was already boarding a train on my way out of town when my phone started buzzing with texts.”

Hamel broke the three-hour mark in the Boston Marathon in 2013 for his personal best time of 2 hours and 58 minutes.

“It’s one of my passions now,” he says. “At my peak I’m training about 12-14 hours a week, including swimming in the very early mornings.”

Until this March, Hamel drove a Nissan Leaf for three years. “It was one of the first in Northern California,” he says.

Someday soon he might buy another electric car – one that he can charge in space number 49 at the Tasman Garage station.