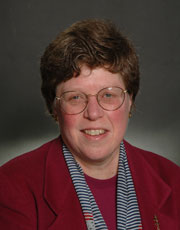 Assistant Vice President and Director of Community Relations, Stanford University and Joint Venture Board of Directors

“That’s me and my mother in Australia,” she says, her voice swelling with obvious pride – not so much for herself as for her mother, Elizabeth, who took up diving years ago in her 50s and continued to dive into her 70s. “I figured if she could do it, I could do it,” adds McCown.

“I absolutely love it. You see things that are nothing like you see on land. It’s a truly different universe of plants, animals and fish. The natural environment was always hugely important to me, so it had an even greater attraction.”

Diving deep beneath the surface to fully immerse herself in a new activity comes naturally to her. The instinct to learn, grow and help others carried McCown through college, law school, a long public service career and into academia.

A longtime attorney, environmentalist and former Palo Alto mayor, planning commissioner and city council member, McCown came to Stanford in 2004 to serve as assistant vice president and director of community relations in the university’s office of government and community relations. She also represents Stanford as a member of the Joint Venture board of directors.

A fourth generation Californian, McCown is the middle daughter of three girls whose father, Theodore, was an anthropology professor at UC Berkeley. Her maternal great grandfather was a school teacher near Chico who sent all three of his children to Stanford. The youngest, McCown’s grandfather, became the first surgeon in Berkeley in the early 1900s, and her paternal grandfather was a Methodist minister who taught at the Pacific School of Religion in Berkeley.

“Teaching and medicine were what I saw that adults did,” she says. “Because in so many ways these professions are fundamentally about community service, they had a profound influence on why I found community service to be such a natural activity for me.”

Growing up in Berkeley, McCown twice traveled around the world with her family, once as an 8-year-old and again at fifteen, while her father took sabbatical leaves from Cal for field work, primarily in India.

“I was incredibly fortunate to travel at such a young age, and that interest has stayed with me to this day. But I distinctly remember being in Bombay when I was eight and seeing beggars with legs missing. That had a great impact on how I think about what human beings do to survive in this world.”

On the second trip, McCown recalls becoming very interested in what was happening in the civil rights movement back home, and by the time she graduated from Berkeley High School in the late 1960s, she was quite aware of the challenges and opportunities facing young women.

“I will never forget my father saying to me that he felt the most discrimination in our society was against women. Up to that time I never thought there was something I couldn’t do because I was a girl. Now I see that my father knew something that I didn’t understand very well.”

McCown left the Bay Area to attend the University of Michigan, where she earned her undergraduate degree in history, then to the University of Wisconsin for her master’s. Finally she returned home to attend law school at UC’s Boalt Hall, earning her JD in 1977.

“Good things happen when people roll up their sleeves to work together to achieve a vital goal.”

“After law school I joined Blase, Valentine and Klein in Palo Alto (later became Ritchey Fisher Whitman & Klein). I was interested in the environment and land use planning, and wanted to be an environmental lawyer working for a public interest firm. Instead, fortune intervened and I applied to become a Palo Alto planning commissioner.”

She served on the commission from 1979 to 1987, including two years as its chair, 1981-1983. She was a member of the Palo Alto City Council from 1990 to 1998 and served as mayor in 1993. She was the fourth woman mayor in the city’s history and was followed as mayor by the fifth, Liz Kniss, now a Santa Clara County Supervisor and the current co-chair of the Joint Venture board of directors.

As Palo Alto mayor McCown was a leader in the city’s collaboration with East Palo Alto and Menlo Park in a tri-city response to the serious run of drug-related homicides in East Palo Alto.

“Jean did an extraordinary job as mayor during a very difficult period,” said Gary Fazzino, McCown’s immediate predecessor as mayor. “She built outstanding relationships with the mayors of East Palo Alto and Menlo Park that helped bring regional resources to bear on the EPA problem.”

Fazzino, currently the vice president of public affairs for Hewlett-Packard, says McCown is a perfect fit for the work of Joint Venture. “She recognizes that regional issues need regional solutions. She is a highly ethical, very fair person who is always very careful to read and study all the facts and listen to all sides of an argument before rendering her decision. Jean could have been the role model Ralph Brown had in mind when the Brown Act was enacted in 1953.”

“Joint Venture has real value in its cross-collaboration among different sectors,” said McCown, who came onto the Joint Venture board in 2005. “Good things happen when people roll up their sleeves to work together to achieve a vital goal.”

“Joint Venture is a long standing example of how Silicon Valley works together. The board is made up of interesting and strong leaders from all sectors and we get to work on the most fundamental infrastructure initiatives of government and the community.”

“Joint Venture is a long standing example of that in Silicon Valley. The board is made up of interesting and strong leaders from all sectors and we get to work on the most fundamental infrastructure initiatives of government and the community that interest me, like transportation, housing and education.”

In addition to Joint Venture, McCown serves on the boards of several non-profit organizations, including Greenbelt Alliance, Avenidas, the Palo Alto Housing Corporation and the Palo Alto Chamber of Commerce. She previously served on the Metropolitan Transportation Commission, the CalTrain Joint Powers Board, the Santa Clara County Congestion Management Agency and the board of the Legal Aid Society.

McCown was the recipient of the John Gardner Leadership Award from the American Leadership Forum Silicon Valley in 1994 and the Athena Award from the Palo Alto Chamber of Commerce in 2004. In those too few times when McCown is not involved in either her official or volunteer duties or traveling, she can be found at her Napa getaway home that sits on hillside overlooking the valley below.

“It’s such a wonderful place of refuge for stress relief,” she says, her eyes gazing in the distance, as if imagining she were there, a place where she can keep her head above water and breathe deeply – without a tank on her back.