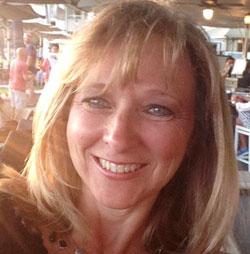 After barely one year in the top post at Mineta San Jose International Airport, Kim Becker Aguirre is walking on air over unexpected sky-high passenger numbers.

Except, of course, for the two passengers who didn’t bother to purchase tickets for their flights.

Aguirre, who took over as aviation director last September and is a Joint Venture board member, says the economic upturn and resurgence of corporate travel have made her first year “a whirlwind, in a very good way.”

Apart from the youth who snuck onto the tarmac and survived a trip to Honolulu in the wheel well of a Hawaiian Airlines flight, and the serial stowaway who finessed her way past a TSA document checker (but was screened for prohibited items) and a Southwest Airlines’ gate agent onto an LA-bound flight, Aguirre has seen few glitches.

“These incidents were unrelated and extremely rare,” she says. “We meet and exceed all industry requirements for safety and security. We had just passed a TSA security Audit three weeks prior to the event with excellent results.

“Meanwhile, we are looking at better methods of detection and we’re testing new technologies for improved security, two of them from local companies.”

Aguirre, who has been with the airport administration for 19 years, took the reins from the retiring Bill Sherry last September and is presiding over a turnaround growth rate that exceeds Oakland and even San Francisco International.

“At 5:30 in the morning, every single gate is full for our 6:30 departure bank,” she says. “We’ll have 28 planes lined up, and then another wave will come later in the morning. In the early evening it gets very busy again, and then again just before the airport’s curfew hours begin.”

“What intrigues me most about Joint Venture is entering a room of such wise people with a diverse range of interests, all talking about regional issues. It’s great to get all that thinking in the same room, talking with people you don’t normally interact with on a day-to-day basis.”

Aguirre says passenger numbers that were predicted to rise 1 to 1.5 percent saw spikes as high as 9 to 15 percent over the holidays and are up more than 7 percent overall on the year.

“This is phenomenal growth for us,” she says. “We were in the red for years after the recession and the $1.3 billion buildout of the new facility. This gives us a little breathing room.”

In 2013 the airport served 8.8 million passengers, or some 24,000 per day, with a daily average of 135 commercial departures and 86 general aviation departures.

“We have to make sure we are offering customers the services they need, all the little things that make a big difference, such as free and fast Wi-Fi and power seats so they can be productive and remain connected prior to boarding,” says Aguirre.

“We’ve always worked with the industry to attract more airlines and more flights to San Jose, but now we also have a consumer marketing program to get the word out about San Jose.”

That program includes working with the San Jose Earthquakes and San Francisco 49ers to attract out-of-town fans flying in for games at the new stadiums here.

“We’re in a prime location for both of them,” Aguirre said. “We’re already seeing an increase of fans in the terminals and general aviation aircraft traffic with corporate jets coming in on the weekends of 49ers games.

“We’re very excited about Kim’s leadership,” said Kim Walesh, director of economic development and chief strategist for San Jose. “We did a national recruitment search and she has proven she was the right candidate. 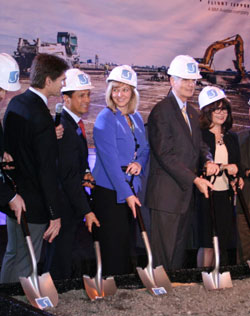 “Kim is building a terrific management team around her,” added Walesh. “She’s also continuing to accelerate air service recruitment and it’s a high priority to work with the business community. The planes leaving San Jose are full and we really need to get more flights.”

As for economic development, Aguirre said that since she also succeeded Bill Sherry on the Joint Venture board last March, she has come to value the broad appeal of its membership.

“What intrigues me most about Joint Venture is entering a room of such wise people with a diverse range of interests, all talking about regional issues. It’s great to get all that thinking in the same room, talking with people you don’t normally interact with on a day-to-day basis.”

“It gives me broader insight that I can bring back to my job. A community needs an airport in order to conduct business and the whole entity works together at the regional level, so sharing information is critical.”

Aguirre especially values the annual Silicon Valley Index, produced by the Joint Venture Institute for Regional Studies. “I use it in our presentations to airlines all the time to tell them about San Jose and the region. Those numbers have been important in my interactions with them. It’s a fantastic document to have.”

Another development that’s encouraging to supporters of Joint Venture’s Wireless Communications Initiative has been the airport’s partnership with Ruckus Wireless to upgrade its “Wickedly Fast Wi-Fi.”

Aguirre was born in Berks County in Pennsylvania and grew up in Exeter Township outside of Reading. Her father, Jay Stoltzfus, now lives in Pennsylvania with his wife, Harriet, enjoying his retirement from years on the road as a long distance truck driver. Aguirre’s mom, Peggy, who now lives in Sacramento with her husband, Tony, earned her degree late in life after being a housewife and a home-based piano and organ teacher. She now is finishing 20 years of employment with the federal government.

Aguirre has an older brother in upstate New York, a sister in Atlanta and brother in Sacramento.

“We’re very excited about Kim’s leadership. We did a national recruitment search and she has proven she was the right candidate.”

“In high school I had no idea what I wanted to do,” said Aguirre. “My principal had taken flying lessons and suggested I go to the airport. While there, I talked to a female flying instructor who was so dynamic and had so much energy that I began flying lessons with her. I was probably 16 or 17 at the time.”

Aguirre went to Indiana University of Pennsylvania, where she graduated with a business degree in 1985. She returned to the Reading airport, where she landed an internship under airport manager Kent George, who became an important mentor.

“He was also the president of the American Association of Airport Executives. That was a game changer for my career focus because this guy was the guy in the industry. He took me under his wing and gave me the experience I needed.”

Aguirre’s first job after that was as an operations coordinator at Teterboro Airport in New Jersey. After two years there she left for Burbank-Glendale-Pasadena Airport for four years, then returned to Teterboro as assistant director for three more years.

Asked her goals for the airport over the next five years, Aguirre said she would “love to become financially sustainable.”

“My job will be to grow the traffic, continue looking at the planning stages. I want to implement new technologies and new programs to reflect Silicon Valley. I want to deliver to our community what they have asked for - more daytime service to New York, Boston, (Washington) D.C. and Chicago, and more international service.” 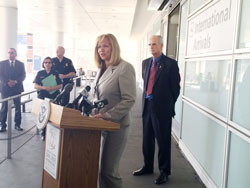 Aguirre has twin sons, Jason and Matthew, who are seniors at Archbishop Mitty High School in San Jose and St. Lawrence Academy in Santa Clara, respectively. Kim and their father, Jim Becker, met in college, but he died from a brain tumor at 39 when the boys were only five. She also has a stepson, Matthew Aguirre, a sophomore at Cal Poly San Luis Obispo.

Aguirre spends her leisure time doing what she loves best, being a mom, attending the boys’ sports events, and baking.

“When everything is right with the world, I love to bake,” she says, “But, I don’t have a chance to do it very often.”

With her focus and energies on making Silicon Valley’s airport the first choice for Bay Area travelers, it may be a while before she sees much of her oven.