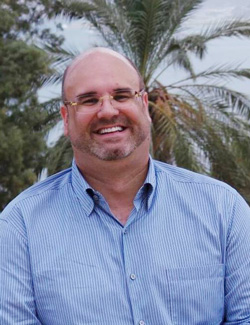 Sometime in the coming weeks, Apple is expected to sell its 600 millionth iPhone since the now ubiquitous device debuted seven years ago.

“And there’s no sight of any plateau on the horizon,” says Marc Blakeman, AT&T’s regional vice president of external affairs and an important contributor to Joint Venture’s Wireless Communications Initiative.

“I don’t think anyone, including us or Apple, predicted what people were going to end up doing with the iPhone,” Blakeman says. “It changed the lifestyle of the American public.”

During his 17 years with the company, Blakeman says AT&T has transformed from “a long distance, wireline company to a mobility company,” now carrying more data traffic than voice traffic on both its wireline and wireless networks.

“We still rely on wireline for business and things like security systems and burglar alarms, of course, but more and more people are cutting the cord,” he says. “I have nieces and nephews who don’t even know what a land line phone looks like.”

Few companies as old at AT&T have adapted to the cultural and technological changes over the past 140 years to survive, let alone flourish into one of the nation’s largest.

“Marc is an excellent listener who truly understands our business and the community where we live and work,”

“It’s amazing when you think we used to have women at switchboards and boys on roller skates taking messages back and forth in our central offices,” adds Blakeman. “Now we have 250,000 employees.”

Even through the most recent recession, Blakeman says, AT&T continued to invest $15-20 billion a year upgrading its network with “no downturn at all.” The company, headquartered in Dallas, serves 110 million wireless subscribers.

“California is our largest market and Northern California is extremely important to AT&T,” says Blakeman. “It’s the innovation capital of the country, if not the world.”

Blakeman came here four years ago from Illinois to tackle the challenges of customer demand and complex permitting issues for installation of equipment.

“Marc is an excellent listener who truly understands our business and the community where we live and work,” said Ken McNeely, president of AT&T California, who brought Blakeman out from Chicago.

“His talents preceded him and I’ve not been disappointed,” McNeely said. “The growth of our business really rides on people like Marc. The Bay Area is an area of early adopters and he’s making sure it has the infrastructure it needs.”

San Francisco in particular poses many challenges to a wireless network, Blakeman says. “It’s very hilly, very dense and surrounded by water – all things that cell signals don’t like. Since I’ve been here we have installed 70 cell sites in the city.” 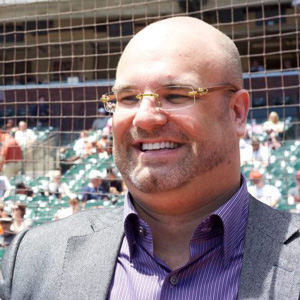 “Marc has been very involved in our initiative,” says WCI director Natasha Ernst. “We worked together over two years to bring a distributed antenna system to Palo Alto and he helped us join a panel at League of California Cities last year that highlighted the success stories Joint Venture has had building private-public partnerships in Silicon Valley.”

“Being the tech hub of the nation, we have mutual goals in Silicon Valley,” Blakeman says, noting that AT&T was a founding member of the WCI.

“Everybody wants to improve cellular service so we look for ways to reach the goal quicker, more efficiently and transparently.”

“The beauty of the Wireless Initiative is that a broad group of government, community organizations, carriers and businesses talk about the issues and work together to solve them.”

“This region should be commended that its leaders have brought together Joint Venture. We’re really onto something. We can accomplish so much more by working together. It’s an interesting model that we have talked about with other cities.”

Currently, Blakeman is collaborating with the WCI to develop infrastructure plans for the region and on building AT&T’s gigabit service in Cupertino, where permitting is more efficient.

“This region should be commended that its leaders have brought together Joint Venture. We’re really onto something. We can accomplish so much more by working together.”

“Marc’s awesome,” said Boe Hayward, a principal with Goodyear-Peterson-Hayward, a Bay Area government affairs agency that has worked with Blakeman for more than three years. “He just gets it. He’s been fantastic, an outstanding mentor and adviser.

“Marc really believes in what he does, and at same time he believes in doing it the right way. He does not believe in cutting corners. He’s very inclusive, talking to anyone about the issues. I’d give him an A-plus.”

Blakeman was born in Jacksonville, Illinois, the oldest of four children of Ron and Vicki Blakeman. The family ran a pig farm and his mother also taught special education classes.

“It was a small town,” he says. “My father was president of the Little League and also did procurement for Oscar Mayer, so everybody knew everybody. There were only 90 kids in my high school class.

“Growing up, I wanted to be president of the United States, and I knew you needed to be a lawyer for that, so I went to Northwestern. I became fascinated by politics. I realized I didn’t want to be a lawyer but I really liked public policy.”

Blakeman graduated with a degree in political science and later earned a certificate in corporate community relations from the John Carroll Graduate School of Management at Boston College.

After early jobs in the press office of Illinois governor Jim Edgar and as director of Chicago operations for lieutenant governor Bob Kustra, Blakeman landed a government affairs position with Ameritech, AT&T’s predecessor, in 1997.

Blakeman, who lives in Emeryville, says travel is a passion. In recent years he has taken his parents on international trips, and he loves to explore California. 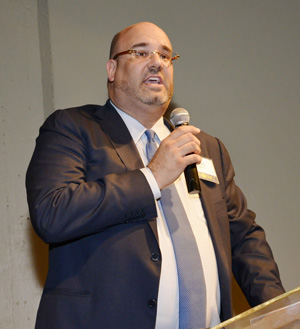 His Market Street office is a convenient eight-block walk to AT&T Park, where the company maintains a luxury suite for executives and clients – a special perk during these heady post-season days.

“It’s the most wired park in the world,” he says, noting that AT&T is also the name sponsor of the football stadium in Dallas and the Spurs arena in San Antonio.

“The Giants are amazing,” he said, winding up a recent visit with Valley Vision. Five hours later, the team won the National League pennant with Travis Ishikawa’s walk-off home run against the St. Louis Cardinals.

All over the ballpark, fans held out their cell phones, taking video and photos and texting the triumph to the world – momentarily bumping that 40,000 percent data figure just a bit higher.