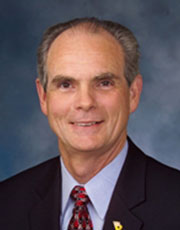 Mayor, City of San Jose and Co-Chair, Joint Venture Board of Directors

Many of San Jose Mayor Chuck Reed’s priority projects will be realized long after he’s left office. From his 15-year Green Vision for San Jose, to statewide high-speed rail, to BART to San Jose, to his new role as co-chair of the Joint Venture board of directors, “these are things we do for our children and grandchildren,” he says.

Those words have taken on a new meaning since Reed’s 60th birthday in August, when he became a grandfather for the first time. He recently made his first trip to Kansas to see grandson Colin Reed Campbell. “It was terrific,” the mayor said, beaming.

Colin was born to Reed’s daughter, Kim and husband Scott Campbell, both Air Force majors and fighter pilots currently studying at Fort Leavenworth’s Command and General Staff College.
Reed says that he always encouraged his children to pursue their dreams and to give something back.

For Kim, that was serving our country and flying jet fighters, and she has flown more than 100 combat missions to date. “She started talking about it when she was twelve or thirteen,” says the affable mayor of San Jose and the new co-chair of the Joint Venture board of directors. “It was right after the Challenger exploded (in 1986). She was wondering what motivates people to fly into space. And she didn’t ask me for my opinion, either. She just knew that was what she was going to do.”

Of course, the fact that Reed himself was an accomplished Air Force captain in his own right, finishing in the top of his class at the Air Force Academy and serving in Thailand during the Vietnam War, may have had something to do with Kim’s high-flying dreams.

It’s exactly that kind of leadership and determination that Reed brings to his role running the nation’s tenth largest city, and now to his added responsibilities on the Joint Venture board of directors.

“The mayor of the largest city in the region has to play a bigger role beyond San Jose. Regional leadership also means I need to unofficially play the role of the ‘Mayor of Silicon Valley’ in Sacramento and Washington, D.C. For my city to succeed, we need the entire region to succeed.”

Reed agreed to serve on the Joint Venture board a month after taking office as mayor in early 2007, and to accept the co-chair duties at the board’s quarterly board meeting on September 12. Though he has served on some 20 boards, commissions, committees and task forces in the past, Joint Venture is one of only two current boards (along with the VTA), Reed serves on as a board member.

Experienced as he was, with two decades of civic participation and six years as a San Jose City Council member from District 4, even Reed underestimated the scope of the mayoralty at first.

“It has required much more of a regional role than I first expected,” he candidly admits. “The mayor of the largest city in the region has to play a bigger role beyond San Jose. Regional leadership also means I need to unofficially play the role of the ‘Mayor of Silicon Valley’ in Sacramento and Washington, D.C. For my city to succeed, we need the entire region to succeed.”

Reed learned the value of community service and hard work through his small town upbringing in Garden City, Kansas, where his family lived in a public housing project. He took jobs sweeping floors while he was in elementary school and later dug ditches, shoveled gravel and worked in the fields. In his high school years, he operated a bull dozer and drove an 18-wheeler semi truck.

When his military service ended, Reed enrolled at Princeton University, where he earned his master’s degree in public affairs before going on to Stanford Law School. After passing the California bar, he became an attorney in San Jose focusing on environmental, employment, land use and real estate law and commercial litigation.

Reed soon delved into community service by offering free legal advice to tenants in housing disputes and helping local non-profit organizations. Those experiences eventually led to his first run for the city council in 2000.

On the personal side, the mayor manages to work in a workout two times a week, loads his iPod with more podcasts than music, listening mostly while traveling, and reads a variety of newspapers, books and magazines.

“I read the New Republic and the Weekly Standard, just to get both sides of the issues,” he says with a smile. He just finished reading “Banishing Bureaucracy: the Five Strategies for Reinventing Government,” by David Osborne and Peter Plastrik, but also mixes in the occasional mystery novel.

Reed and his wife, Paula, have been married 38 years. He still counts their wedding day – June 6, 1970 – among the best days of his life. She is Clinical Director of Operations for Oncology and Infusion Services for the Palo Alto Medical Foundation. Reed often comments that medical professionals like Paula “are the real heroes,” whose work is unnoticed except when one is in need of care.

Both of their children have followed their lead in public service. Their son, Alex, a graduate of Santa Clara University, has been working to help end the proliferation of weapons of mass destruction. He is a research associate with the Cooperative Nonproliferation Program at the Henry L. Stimson Center in Washington, D.C., an institution endeavoring to prevent the spread of nuclear, biological and chemical weapons.