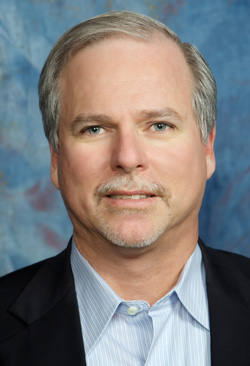 All busy executives need time to relax now and then, just to kick back and take their foot off the gas. It doesn’t quite work that way for Chris DiGiorgio.

Sure, he likes to ski and golf, but you’re more likely to find him racing exotic sports cars around the track at Thunderhill Raceway Park in Willows or Laguna Seca in Salinas, at speeds up to 140 miles per hour.

For the California Managing Director of management and technology consulting company Accenture and the co-chair of the Joint Venture board of directors, keeping the pedal to the metal in business, life and community activities has always been his style and passion.

That’s one reason he joined the Joint Venture board two years ago, accepted the co-chair role with San Jose Mayor Chuck Reed in September, and recently agreed to also co-chair, with Reed, the organization’s new Climate Prosperity initiative that will develop a “greenprint” for Silicon Valley’s future.

“Joint Venture fits my personal and corporate mission,” says DiGiorgio. “I learned early in life that giving back to your community is important and it’s one of Accenture’s core values, too. We always ask, ‘what’s the next thing you can do, who’s the next person you can help?’”

When first approached to join the Joint Venture board two years ago, DiGiorgio was particularly drawn to the organization’s annual Silicon Valley Index of economic and community trends.

“Joint Venture fits my personal and corporate mission. I learned early in life that giving back to your community is important and it’s one of Accenture’s core values, too.”

“I really liked the independent research aspect of the Index,” he says. “I hadn’t seen anything like it in the state. It’s nonpartisan, objective, thoughtful, comprehensive and highly professional. We needed a vehicle like Joint Venture to get more involved in the community here. The Index was a major factor for me.”

In addition to his board duties, he now serves as an advisor for the Index, providing the crucial corporate perspective for the project. DiGiorgio also sits on the business school advisory boards for Santa Clara University Business School, the California State University Foundation and CSU Chico, as well as the boards of the Bay Area Council Economic Institute, the Computer History Museum and the Tech Museum of Innovation Tech Awards program.

“I really liked the independent research aspect of the Index,” he says. “I hadn’t seen anything like it in the state. It’s nonpartisan, objective, thoughtful, comprehensive and highly professional. We needed a vehicle like Joint Venture to get more involved in the community here. The Index was a major factor for me.”

“Chris has leadership attributes that make him a natural for his role,” says Joel Friedman, DiGiorgio’s longtime Accenture colleague, who retired three years ago as president of business process outsourcing for the global consulting firm that has grown to190,000 employees in 49 countries. “He is very unassuming and down to earth. He has a natural style that makes you feel like you’ve known him for ever. That builds confidence and trust.”

Shortly after Chris was born in Philadelphia to an Air Force family, they transferred to Travis Air Force Base in Fairfield, where Chris was raised. While his older brother, Thomas, followed their father into the Air Force, and is now a captain for Delta Airlines, Chris went to Solano College and then on to Chico State, where he pursued a dual major in business and computer science. Following in the tradition, Chris’ younger brother, Keith, also earned a computer science degree at Chico.

Today DiGiorgio manages some 3,000 Accenture workers in the state, but there were only 3,000 in the entire company – and just 185 in San Francisco – when DiGiorgio joined what was then Andersen Consulting in 1981.

“It was rare then to have both degrees, and Chico was one of the first schools to offer that,” DiGiorgio says. “The timing was right for me to join a company like this that was at the front of the technology wave, especially in the Bay Area. We’ve basically been staying on top of that wave for the last thirty years.”

But first he had to start at the bottom. New Accenture employees are plunged almost immediately into entry level jobs to help them understand their clients’ needs from the ground up.

“The best way to supervise a person is having done it yourself,” said Ed Kennedy, DiGiorgio’s first boss and longtime mentor at Accenture, who retired eight years ago as head of the Western U.S. operations. “You have to dig a ditch and lay a pipe before you become a contractor, or pick the weeds before you can become a landscaper.

“Chris was a normal, bright kid, what I call a light blue collar guy. He just wanted to do well. His best trait is the ability to listen slowly and talk fast. In other words, he is very effective at communicating what he’s learned and what other people should learn.”

With Kennedy there 38 years, Friedman 34 and DiGiorgio now 28, it’s clear that Accenture fosters a culture of longevity, loyalty and strong client relationships.

“Accenture is pretty unique,” says Friedman. “It’s extraordinarily collaborative, about ‘we vs. me.’ Chris embodies that culture. He plays a significant leadership role as a face to the marketplace and as a mentor for the young professionals.”

Another aspect of the Accenture way encourages employees to spend more time out of the office than in, meeting with clients and developing relationships. As his role and the company grew, Chris found himself traveling abroad extensively, averaging 300,000 miles a year. At one stretch of just over three years he logged a million air miles.

“Accenture is pretty unique,” says Friedman. “It’s extraordinarily collaborative, about ‘we vs. me.’ Chris embodies that culture. He plays a significant leadership role as a face to the marketplace and as a mentor for the young professionals.”

“Late in 1999, after my twentieth trip to Europe in a year, I remember thinking as the plane was landing, ‘What am I doing?’” he recalls. “My boys were still little, this is the center of technology globally and I figured it was time I started spending more time closer to home.” Gradually he transitioned into his current role, overseeing Accenture’s California business.

Chris and his wife, Eileen, have two sons, Scott, 16, and Brian, 13, and make their home in San Carlos. The boys both attend the Woodside Priory School in Portola Valley. Scott is just beginning to drive, but it’s still a little soon to tell whether he has inherited his father’s love of cars.

“I’m a car guy,” says the unassuming DiGiorgio, whose first job was in a Fairfield gas station. “I prefer German and vintage British cars, like the Porsche and the ’69 Jag XKE.”

He’s come a long way from his first car, a 1970 Datsun 510. In addition to his own Porsche 911 and an Audi S8 with a V-10, 500-horsepower Lamborghini engine, DiGiorgio also belongs to Club Sportiva, an automotive time share club that gives him access to high performance sports cars.

In a typical outing at Thunderhill, a three-mile race track with fifteen turns, he’ll do thirty laps at high speeds. It may not sound all that relaxing, but DiGiorgio is clearly a man in the driver’s seat.