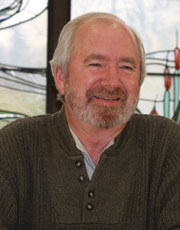 Mike Curran has spent a lifetime in workforce development, so he knows a few things about the world of employment, but if you ask him what job he wouldn’t want he’ll tell you without hesitation, “Anything with heights. I don’t like heights.”

Fortunately, the down-to-earth director of the NOVA workforce board for the past 23 years has risen to the top of his field with both feet planted firmly on the ground. But as he approaches retirement from his current role in the coming months, he never expected he would still be at NOVA so long.

“It’s a constantly changing landscape. We need partners to work collaboratively because the world is flatter. The headquarters of companies are here but their work is now more often distributed throughout the world, and we experience this reality first here in Silicon Valley. We have to be relevant to both job seekers and employers trying to navigate this new reality.”

“When I first came to NOVA I made a commitment to do this for three years and not a day longer,” Curran recalls a smile. “But the exciting thing about Silicon Valley is that every three years the talent acquisition and development challenges seem to change dramatically. So I stayed.”

Now 59, Curran has seen the growth of workforce development over the past quarter century from a localized need to a global one with impact throughout Silicon Valley and the state. Today there are 650 workforce boards in the U.S., 49 of them in California and several in the Bay Area alone.

“It’s a constantly changing landscape,” says Curran. “We need partners to work collaboratively because the world is flatter. The headquarters of companies are here but their work is now more often distributed throughout the world, and we experience this reality first here in Silicon Valley. We have to be relevant to both job seekers and employers trying to navigate this new reality.”

“Joint Venture gives us a framework for initiating conversations across a multi-city, multi-county region and brings business and civic leaders together through its power to be a convener.”

Curran says the “churn” of jobs and the workforce in Silicon Valley is more than a city-by-city or county-by-county issue, but rather a regional one. That’s where Joint Venture comes in.

“NOVA, or the North Valley Job Training Consortium, which serves the heartland of Silicon Valley, is very proud of its accomplishments over the past 25 years,” Curran says “However, given the dynamic economics facing our region today, our past efforts are not enough to meet the growing challenges and opportunities. Joint Venture gives us a framework for initiating conversations across a multi-city, multi-county region and brings business and civic leaders together through its power to be a convener.”

Curran, along with his counterparts leading neighboring workforce boards, has recently invested in Joint Venture to champion an effort to understand and gain support for new ways to grow our local talent pool.

“Silicon Valley has always experienced what we call ‘creative destruction’ as companies reinvent themselves,” Curran says. “New opportunities come in one door while old jobs go out the other. Companies need to be flexible to stay in business, but that often leads to a reduction in the workforce. This is and will be exacerbated by the large number of replacement workers needed to fill the vacancies created by retirements. We have had insufficient resources and antiquated systems to assist our workers in making these transitions. Given that 85% of the workforce ten years from now will be made up of people working now, we need to find better ways for adults to build skills and move up. We believe our partnership with Joint Venture will be catalytic in gaining a commitment for a new regional strategy.”

Martha Kanter, chancellor of the Foothill-DeAnza Community College District and a Joint Venture board member who has known Curran for fifteen years, says Curran is “a premier example of the Silicon Valley work ethic – tireless, unstoppable, someone with his finger on the pulse of how employment affects our daily lives.

“Mike has a passion and strategic vision for what he does,” says Kanter. “He cares a great deal for the people displaced by job loss. He builds upon ideas and is not afraid to engage in conflicting views to reach a consensus. Mike has made NOVA a national model of workforce development.”

Curran was born and raised in Santa Cruz and knew early on that he was destined for community service.

“In the ninth grade I signed up to attend St. Joseph’s Seminary in Mountain View. I really enjoyed the part about working with people and helping communities work better, but I didn’t do well listening to authority. I would have made a bad priest.”

Instead, Curran worked for the Catholic Council for Social Justice, helped create the Westside Youth Services home for wayward kids on Reed Street in San Jose while attending UC Santa Cruz, where he earned his undergraduate degree in sociology.

After working in that and other community youth and education programs, Curran took his community organizing skills to Sunnyvale in 1973 and in 1978 co-authored a study for the City of Sunnyvale on the changing role of local governments in social policy and service delivery. One of the results of this study was, when the opportunity presented itself, the city was willing to provide the regional leadership to form the six city NOVA consortium in 1983.

It was also during the mid-70s, that he met his future wife, Elaine, a park leader who later held upper management positions with the City of Sunnyvale (including the director of NOVA) before moving on to serve as the CEO of Junior Achievement of Silicon Valley and Monterey Bay.

“Silicon Valley has always experienced what we call ‘creative destruction’ as companies reinvent themselves. New opportunities come in one door while old jobs go out the other. Companies need to be flexible to stay in business, but that often leads to a reduction in the workforce.”

NOVA’s support and involvement with Joint Venture has been there since the very beginning of the Network. In the early 90s, Curran says, “We were looking at a valley that many were writing off as history. Good paying manufacturing jobs were disappearing, and other regions and countries were becoming more competitive. The hope and optimism that are hallmarks of the region were eroding, along with the quality of life. With Joint Venture’s inspiration, we helped bring together civic and business leaders to develop and take action on a plan for what we needed to do. Our workforce initiative of 2009 will parallel this effort.”

Amy Chan, Curran’s longtime supervisor who is retiring as Sunnyvale City Manager after 27 years, applauded his skills, dedication and personality.

“I think the world of Mike,” said Chan. “He’s great with people. He’s a convener, and idea person, able to listen to people and support the board and its mission. He is very smart and thoughtful and has a wealth of knowledge. He’s been able to carry out tough assignments this year because of the rescission of federal funding as well as reduction in other funds.

“Mike really found his niche with NOVA. He lives it and breathes it. NOVA is Mike and Mike is NOVA.”

Under Curran’s direction, NOVA has been widely recognized for its high-quality, entrepreneurial approach to customer-driven, outcome-oriented service delivery, including a Presidential Award as one of the country’s most outstanding training programs. NOVA also received national acclaim as the single recipient of the Enterprise Council’s Quality Award for its success in embedding the Malcolm Baldrige framework into both its day-to-day operations and its strategic alliances.

“I’ve been blessed to do the work that’s most important to me,” he says. “And at the same time I was able to stay in the community where I was born and raised, and to raise my own family here, too.”

Mike and Elaine have two children, Brendan, a University of Portland graduate working as an energy management engineer, and Megan, a senior at UC San Diego studying cognitive science and theatre.

Once he retires, Curran plans to take a month off at the family’s vacation home in Graeagle, near Quincy, where he likes to hike, golf, fish and catch up on his reading. He just finished “The Starfish and the Spider: the Unstoppable Power of Leaderless Organizations,” by Ori Brafman and Rod Beckstrom, and is starting Gregory Berns’ “Iconoclast: A Neuroscientist Reveals How to Think Differently.”

Though Curran is retiring, no one expects he will abandon the work he so loves.

“The next chapter for me is to pick and choose what I want to do,” Curran says with a smile of satisfaction, “but I intend to work somewhere in the cross section of workforce and economic and community development. I will continue looking for things that can make a difference in the day-to-day lives of people, and communities do work better when its residents can become better workers.”