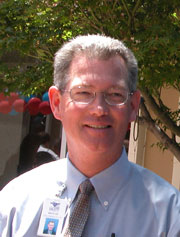 Forget the obvious coincidence that Santa Clara County Emergency Medical Services Director Bruce Lee happens to have the same name as a certain martial arts film star. He’s heard it a million times, and they don’t even look alike.

A much more apropos comparison to an action hero came from the Santa Barbara County Board of Supervisors when Lee left the EMS director post there in 1990. In a sendoff proclamation, the board saluted Lee as a modern-day “Clark Kent” for his “superhuman” efforts to improve the county’s emergency services.

Fit and agile as he is at 53, the mild-mannered Lee may be slightly slower than a speeding bullet and a bit less powerful than a locomotive, but he has certainly saved plenty of lives and rescued scores of people in danger. And now he is guiding the efforts to prepare our entire region for any and all catastrophes.

“We can’t be scared all the time. We live in a safe environment but a few of us need to be very concerned about threats and hazards. I consider myself that kind of zealot in a good way.”

“This was my destiny in life to do this kind of work,” says the self-effacing Lee, characteristically brushing off the parallel to the comic book icon.

In his current position since 2004, Lee is responsible for the management and oversight of a complex EMS system in a county of 1300 square miles with 15 cities and a population of 1.7 million. That includes 12 acute care hospitals, three trauma centers, eight ambulance providers, 14 fire department ALS providers and some 85,000 annual service calls.

As the county’s disaster preparedness chief, Lee is also working closely with Joint Venture to develop a Regional Disaster Resiliency Center at Moffett Field as a central command, response and recovery center in the event of a crippling natural or man-made disaster.

“The Joint Venture project represents a true public-private partnership on a grand scale,” says Lee. “It’s going to take all of the horsepower of both sectors to get it done. It’s very unique in the U. S. in terms of the potential we have to bring together an incredible array of expertise, especially the technology resources that only exist in Silicon Valley.”

Lee said the 9/11 tragedy in 2001 “caused a major shift” in thinking about the funding of disaster preparedness, moving it front and center and making it a priority for all levels of government and the private sector.

San Jose State University biosciences professor Dan Holley, a member of the Joint Venture disaster preparedness steering committee, says Lee is “very much a visionary and a natural leader” who brings keen listening skills and persuasive arguments to his job. “But I’m still trying to break him from his ‘Crackberry’ addiction.”

Aside from the threat of terrorist attack, the more likely event looming over Silicon Valley is that of a major earthquake, which most experts agree will occur in the Bay Area within the next 30 years.

“We realize we have increased vulnerabilities and risk, both man-made and natural,” says Lee, “but we can take steps now to mitigate the impact and improve our chances for faster recovery. I like to think it takes a few zealots to keep things moving.

“We can’t be scared all the time. We live in a safe environment but a few of us need to be very concerned about threats and hazards. I consider myself that kind of zealot in a good way. We push, get knocked back and keep pushing. Most of us in the field hope our work never gets tested, but we need to be ready.”

“The Joint Venture project represents a true public-private partnership on a grand scale.”

The son of public school teachers, Lee grew up on the Peninsula and attended Aragon High School, where his father, Jack, now 84, taught English for three decades. Lee’s mother, Margie, who taught at elementary schools in San Mateo, passed away just last November. Bruce has one brother, Craig, a United Airlines mechanic.

Lee first discovered the appeal of emergency services while a pre-med student at the University of Denver.

“I thought I wanted to be a physician, but I saw paramedics in action when I was volunteering at Denver General Hospital and I decided that’s what I really wanted to do. It is tremendously rewarding work. Saving lives brings an immediate sense of accomplishment.”

After completing his training and working as a paramedic for a while in Denver, Lee said. “I realized that over time it is best done by younger people and I began to look at my long term career plans.”

He soon returned to California to become supervisor of the EMS operations team at the University of California at Santa Barbara, then took over as director of the Office of Emergency Management for Santa Barbara County in 1985.

While there, Lee supervised the county’s response to the devastating Painted Cave fire in the summer of 1990 that destroyed nearly 500 homes. His work earned him the California Governor’s Office Award for Excellence in Emergency Management from then-Gov. George Deukmejian.

Lee left Santa Barbara to become a senior emergency management consultant with the Halliburton Corporation, with assignments in both government and private industry in the Middle East and Taiwan as well as in the U.S.

Gradually, the heavy international travel demands of the job wore on Lee and his wife, Janet, who were raising three young children, so he left Halliburton to become director of operations for the American Medical Response and Rural/Metro Corporation. He later served as the regional administrator for the Coastal Valleys EMS Agency based in Sonoma County before joining Santa Clara County nearly five years ago.

“What Bruce brings to the table is that he understands the delivery of EMS services for the private sector as well as the public sector,” says Lou Meyer, senior vice president for the Emergency Medical Services Corporation who supervised Lee with AMR in Sonoma County. “He is thoughtful and knowledgeable and can bring people together.

“Not everybody can do this job,” Meyer added. “You need to be able to face crises in a calm and effective manner and Bruce has that ability.”

“It’s important for families to be ready at all times”

In 2006, Governor Schwarzenegger appointed Lee to the State Commission on Emergency Medical Services, and he was elected chair of the commission this year. Lee also is president-elect of the EMS Administrators Association of California and serves on the board of the Peninsula Stroke Association. He holds a BA degree in health services administration from St. Mary’s College and graduated from the Daniel Freeman Hospital School for Paramedics in Los Angeles.

Today the Lees and their children, Andrew, 21, Kristen, 19, and Brian, 15, make their home in Los Altos, but they enjoy getting away to a family cabin at Buck’s Lake in the High Sierra near Quincy.

Off duty, Lee answers the call to the great outdoors as often as possible to ski, fish, hike, bike, and hunt game birds. “My grandfather was a superintendent in national parks – Bryce Canyon, Lassen, Crater Lake, Yosemite – and my father was a park ranger before he started teaching, so it’s in the family,” says Lee.

“He thinks he’s a pretty good trout fisherman,” kidded Dan Holley, who has gone on fishing and hunting trips with Lee. “I’m much better, of course. Bruce is also a fanatical hockey fan and a big Sharks supporter. I wouldn’t be surprised to see him in teal face paint.”

Holley also emphasized that Lee is “very much a family man” who is passionately involved in his kids’ activities. Asked if he keeps emergency supplies at home as the experts advise, Lee says there is a large container in their garage with all the necessary items for a period of time without food, water or power.

“It’s important for families to be ready at all times,” says Lee. “My family knows I could be called away any time of the day or night and not be able to return for several days or longer, so we have to have disaster planning at the family level. I need to know my own family is safe so I can go out and do the job I am supposed to do.”

If he happens to be away from home when disaster strikes, the only other challenge Lee might face is finding a nearby phone booth for a quick change into his “work” outfit, the one with the large “S” on the chest.