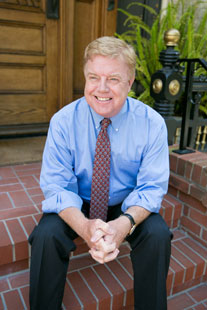 Richard Moran was just a 20-year-old sophomore at Rutgers College when he decided what he wanted to be: a college president.

“I went out and bought a book on it,” he tells a recent visitor to his campus office. Moran walks over to a nearby bookshelf and pulls out his now 40-year-old copy of “The Education of a College President – A Memoir,” by former MIT president James R. Killian, Jr. “See, I still have it. I think I paid ten cents for it. I loved everything about college. I kept going until I got a Ph.D. so I wouldn’t have to leave.”

It only took him 43 years to land his dream job last September, but there were vital stops along the way as a CEO, venture capitalist, board chair and consultant.

“The college entered into a national search for someone who understood education, business and Silicon Valley,” says Moran, who had been CEO of Accretive Solutions, a partner at the VC firm Venrock, a senior partner with Accenture, chair of a public company and a board member for several companies. “I jumped at the chance.”

He also became a member of the Joint Venture board of directors in November to further enrich what he sees as his responsibility as “a leader in the community.”

Moran has authored seven books on business, is in demand as a speaker, is frequently sought by the national media as an expert on workplace issues, is a regular contributor as an “influencer” on LinkedIn, hosts a weekend radio show, “In the Workplace,” on KCBS, and writes a monthly wine column in the St. Helena Star.

Of his first six months at Menlo College, the tall, affable 64-year-old with blue eyes and a shock of reddish blond hair says with a warm Irish smile, “So far, so good.”

“My days are full,” he says. “It’s a lot like being a CEO, but I’ve had a few surprises, including the demands on my time. “I thought being a CEO had long days. There are so many constituencies here – students, alumni, faculty, the local community.”

Moran says the complexity of the decision-making process as Menlo’s president is “like a Rubik’s cube – with every click to line things up, something else changes. Every decision affects something else.”

In fact, to illustrate the point Moran has his own custom-made Rubik’s cube, with the Menlo College logo on one side.

“Rich is masterful at allowing ideas to flow without criticism from others.”

Menlo College, a small private college in Menlo Park, today has 750 students, many of them from around the U.S. and foreign countries, attracted by the lure of Silicon Valley. Its two primary undergraduate degree programs are in business and psychology.

“It’s the unknown jewel of Silicon Valley,” says Moran. “It’s a place where students can realize their potential unlike anyplace they’ve been before.”

Another aspect of his role that has surprised Moran has been the attention and respect afforded him on and off campus. “Being a college president is a privilege, really cool,” he says. “After all, there are only 3000 of us in the country.”

Among his first actions as president, Moran instituted a mandatory summer internship in a supervised, real-time business environment as a requirement for graduation.

“An internship is the currency required to make the transition to a great job. My goal is to make this the best small college on the West Coast.”

Moran saw Joint Venture as an important partner in his community leadership role and in spreading awareness of Menlo College.

“We’re all citizens of Silicon Valley,” he says. “I need to be involved in the regional work Joint Venture does. I’m especially interested in the Grand Boulevard Initiative. We have a mile of frontage on El Camino Real.” 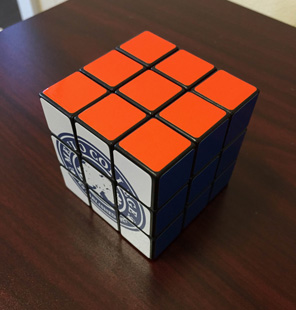 Affordable housing is also important to Moran, and he was particularly impressed with the Silicon Valley Index, speakers and other aspects of Joint Venture’s recent State of the Valley conference.

He added that other local college presidents, including Stanford’s John Hennessy, who spoke at State of the Valley, and Notre Dame de Namur’s Judith Greig, another Joint Venture board member, have been especially helpful to him as he acclimates to the Menlo presidency.

“Rich is masterful at allowing ideas to flow without criticism from others,” said Ray Rothrock, a partner at Venrock, where Moran served as an organizational behavior consultant before becoming a full-time partner. “He has the ability to read people pretty well. He’s also a savvy politician and he can sense how to work a large crowd he doesn’t know.”

Rothrock added that Moran “is a good human motivational detective – he can suss out what motivates people, what matters to people and what they need to do to win. And he has a very big heart. He cares for society and his neighbors and he participates in thankless pro bono activates that nobody every hears about.”

Moran grew up in a traditional Irish Catholic family in the southern New Jersey town of Rahway, best known, he quickly points out, for the state penitentiary there.

His father, John, now 92, was a World War II Army paratrooper and medic who returned from the war to work in a variety of manufacturing companies. His mother, Louise, was a homemaker who raised Richard and his two younger brothers, John, who has passed away, and Tim.

Moran’s parents now live in Sacramento, moving there some years ago in order to be closer to their family. “My dad always says the United States is on a slant and that everything loose eventually rolls into California,” Moran quips.

“We’re all citizens of Silicon Valley. I need to be involved in the regional work Joint Venture does.”

Richard became a star runner in high school and landed a track scholarship to Rutgers, 40 miles from home, where he majored in English. “I knew how to read, write and run,” he says.

After graduation from Rutgers, Moran went to Indiana University, where he earned his master’s degree in personnel administration and was an assistant track coach.

He took his first job as the 24-year-old dean of students at the University of North Alabama. “It was challenging to have that responsibility at such a young age,” he says, “but it confirmed my goal to be in college administration.”

After two years in Alabama, Moran enrolled in the doctoral program at Miami University in Oxford, Ohio, earning his Ph.D. in organizational behavior and higher education in 1981.

Among his first jobs was with Atari, an early video game maker.

“I’ve known Rich since those Atari days and we’ve spent time driving around Ireland together,” said former San Jose mayor Tom McEnery, who is also a colleague with Moran in Silicon Valley Global Partners. “He’s a fascinating guy. He’s not so much a Renaissance man as a butterfly man. He’s always coming out of one thing and springing into another.

“I find him one of the most interesting people. He can explain complicated situations in theories and economic trends in a very understandable way.”

Atari is also where Richard met Carol Gilbaugh, a company publicist who interviewed him for the employee newsletter. A few years later, he was the one to ask the big question and they married in 1990. Three sons and a daughter make their lives interesting: Brady, sales and marketing manager of Hyland Estates wines in Oregon; Scott, a vice president with Silicon Valley Bank in New York; Megan, an account executive with North of Nine Communications in San Francisco; and John, a senior at Trinity College in Connecticut. Brady and his wife have given Richard and Carol their first granddaughter, Kennedy.

Richard joined what was then Andersen Consulting (now Accenture), where he remained for 15 years, rising to senior partner in San Francisco with leadership roles in markets that included media and entertainment, high technology and communications.

From there he became Chairman of Portal Software for four years until its sale to Oracle in 2006, and then joined Venrock for the next four years, focusing on investments in media, SaaS and “distributed workforce” companies. 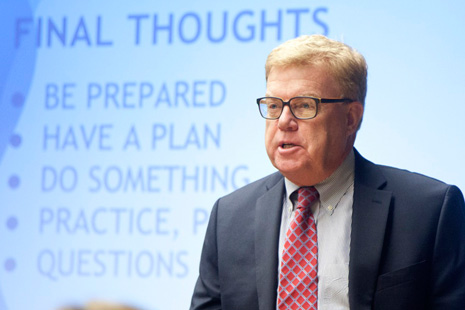 In 2010, Moran became CEO of the professional services and consulting firm Accretive Solutions, where he focused on finance and accounting and staff augmentation. While there he launched his KCBS radio show and became one of LinkedIn’s 300 “influencers.”

He has been a partner with Irish Technology Capital since 2009. In addition to Joint Venture, Moran serves on the board of the National Association of Corporate Directors’ Silicon Valley Chapter and is the audit committee chair of the Noyce Foundation.

He has served on the boards of Mechanics Bank, GluMobile, Just Giving, the Craigslist Foundation, the Trustees of the San Francisco Museum and Historical Society, the Trustees of Golden Gate University, Project Open Hand, the National Trust for Historic Preservation, and R4GS, as well as several advisory boards.

His latest book is “Navigating Tweets, Feats and Deletes: Lessons for the New Workplace,” a compendium of tips on how to succeed in today’s digitally disrupted work environment. It’s an updated version of his earlier best seller, “Never Confuse a Memo with Reality.”

What’s more, Moran makes his own wine on his 12-acre property in Calistoga and serves as CEO of Moran Manor Winery, which produces some 600 cases of a red blend and Chardonnay wine each year. That experience led to his local newspaper wine column. 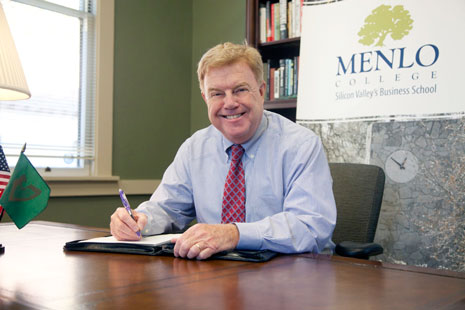 “Think of it as ‘Green Acres’ meets ‘Sideways’,” he says.

Leisure time is rare, Moran admits – “I flunked retirement twice” – but he finds his most rewarding time out of the office in working the vineyard and upgrading the family’s old home in Calistoga.

“I love anything physical – chopping wood, gardening, working with tools, driving the tractor – to be enjoyable,” he says. “That’s my real passion.”

That, and being a college president.