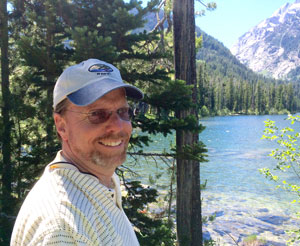 As a college student in the 1980s, Dennis Jacobs wanted to be an inventor.

You might say that’s what he became, perhaps just not the way he imagined. Today, as a university provost, Jacobs is applying his innovative skills to reinventing the collegiate experience.

The chief academic officer at Santa Clara University, Jacobs is leveraging the strengths and challenges of Silicon Valley to help SCU students become innovative and entrepreneurial, and at the same time to create a “more humane, just and sustainable world.”

“Our mission is about transforming the lives of our undergraduates,” Jacobs told a visitor to his campus office recently. “As a Jesuit university, we are deeply committed to educating the whole person, and instilling values of giving back and promoting social justice.”

“We aspire to be more relevant and connected with companies in Silicon Valley, to create more partnerships,” he added. “We have 6,000 companies in our back yard. The university can be a more active and engaged partner.”

To achieve this goal in part, Jacobs said, the school is bringing the thought leaders of Silicon Valley to the campus to teach, to speak and to be mentors. At the same time, students are working at off-campus internships in greater numbers than ever.

“There’s a degree of mutual engagement in the community that we’ve never seen,” says Jacobs.

The primary focus for Jacobs now is the university’s strategic plan, “Santa Clara 2020.”

University President Father Michael Engh, S.J., has characterized it as the “culmination of four years of collaborative, inclusive planning and visioning by the university community.

“By integrating the university's enrollment, facilities, and strategic plans in an unparalleled fashion,” says Father Engh, “it honors our historical mission while building upon our core strengths and opportunities.”

“In my mind, Dennis is the driver behind this plan,” said Jeff Miller, a member of the university’s board of trustees and chair of the advisory board for the Miller Center for Social Entrepreneurship. “He is pulling together inputs from the faculty, businesses and the trustees. It’s been a really interesting and well-run process.

“I realized Joint Venture is a perfect fit for us. It made sense to be involved. Educational institutions have a large role to play in Silicon Valley.”

“I think the absolute world of Dennis,” Miller added. “He is very engaging, he listens well, he’s articulate, and he pushes back positively when appropriate. He does an excellent job of helping us understand the appropriate time frame for getting something to happen and why.”

Jacobs says the university is “very proud of the Miller Center for Social Entrepreneurship. It’s been instrumental connecting the university with entrepreneurs and VCs here in Silicon Valley. We are partnering with amazing people around the globe, creating a transnational social entrepreneurial endeavor.”

Jacobs joined the Joint Venture board two years ago after a meeting with CEO Russell Hancock.

“Talking with Russ, I realized Joint Venture is a perfect fit for us,” Jacobs says. “It made sense to be involved. Educational institutions have a large role to play in Silicon Valley.”

“It helps me to learn about the needs of Silicon Valley for transportation, housing, renewable energy and the like so we can develop new degree programs. For example, we are creating a master’s program in supply chain management for 2016. I’ve been educated through Joint Venture.”

Jacobs came to Santa Clara University in 2011 after 23 years with the University of Notre Dame, where he served as vice president and associate provost for undergraduate studies.

“Dennis is a pretty amazing guy,” says Molly McDonald, president Engh’s chief of staff. “He’s incredibly intelligent and he’s thoughtful, discerning and decisive. The planning process has been a huge piece of what he has done, and he has made some pretty big hires as well.

“Dennis is also incredibly astute at reading a culture such as the one here and navigating within that culture. We’re really lucky to have him.”

“I think the absolute world of Dennis. He is very engaging, he listens well, he’s articulate, and he pushes back positively when appropriate.”

He has also been a chemistry and biochemistry faculty member at Notre Dame since 1988, and has received numerous grants and awards, including the Kaneb Teaching Award at Notre Dame, Carnegie Scholar of the Carnegie Foundation for the Advancement of Teaching, and the prestigious Professor of the Year for Doctoral and Research Universities from the Council for Advancement and Support of Education (CASE).

Jacobs’ move from Notre Dame to Santa Clara University marked his return to his native California, where he earned his bachelor’s degrees in chemistry and physics at the University of California at Irvine and his Ph.D. in chemistry from Stanford University in 1988.

Dennis was born and grew up in the Ladera Heights section of Los Angeles, with his two older sisters. Christine is now a doctor in St. Louis, and Marilyn is a pharmacist in Loma Linda. Their father, Marvin, was an elementary school teacher and their mother, Esther, was a homemaker.

“They instilled a strong love of education in me and an ethic to always do your best in school,” says Jacobs. “My dad got me interested in science early on. I was a very curious kid. I wanted to know what makes things work.” 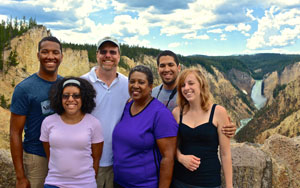 After high school, Dennis enrolled at UC Irvine, not far from home. “I didn’t see teaching in my future right away. I wanted to tinker with things and be an inventor. But later in college I realized that by getting a Ph.D. I could combine teaching and research.

“So I went to Stanford to get my doctorate in physical chemistry and I loved it there! That cemented it for me to commit my life to higher education.”

Irvine was also where Jacobs met his future wife, Thea Mabry, a psychology undergrad. They were married in 1988 and the couple has three children. Dan, 26, lives in Chicago with his wife, Kelly, and works for Accenture Interactive. Katrina, 24, works at the YMCA and is studying at De Anza College here. Gabe, 21, is a junior at the University of Notre Dame, studying architecture.

When he has spare time, Dennis loves to play piano, which he began studying at the age of nine. He also paints, with both oils and acrylics, and has displayed some of his works in his office.

Given his education, career, interests and family, it’s safe to say Dennis Jacobs has invented a successful and fulfilling life for himself.