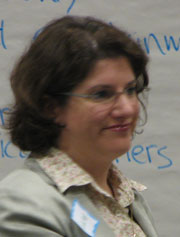 As busy and dedicated as Laura Snideman is in her role as the City of San Mateo Economic Development Director, you are not likely to find her standing in one place gazing idly into the distance for hours. Except, of course, on those rare occasions when you can find her standing in the middle of a lazy Idaho river up to her hips in waders, a fly rod in her hand.

“I don’t have a very good work-life balance,” admits Snideman, who is the new chair of the Silicon Valley Economic Development Association (SVEDA) in addition to her City of San Mateo duties. “But I do like fly fishing. My dad taught me when I was twelve. I try to go when I can. It’s just so peaceful up there. No cell phone, no email, no TV.”

Such respites are too few these days for Snideman, who in three years on the job in San Mateo has made significant progress improving the business environment there. She established the city’s first Business Resource Center as part of a new business retention and expansion effort, the only such center between San Francisco and San Jose. She also contributed to a new Downtown Specific Plan for San Mateo and produced the successful Central Park summer concert series, among many other accomplishments.

Previously Snideman filled a similar role as Economic Development and Housing Director for San Carlos for two years, the latest stops in a 20-year career in the public sector that has taken her from Bakersfield to Beijing and back to the Peninsula.

“SVEDA is a valuable extension of the Joint Venture model for collaborating to focus on the quality of life in the valley.”

An active member of SVEDA for the past three years, Snideman welcomes the opportunity to lead the organization that is a cross-community effort of Joint Venture to ensure the success of businesses in Silicon Valley by bringing public and private resources together to foster business growth.

She succeeds Larry Cope, who recently left the region to become the director of the Tuolumne County Economic Development Authority.

“It’s important to belong to SVEDA, for businesses to support each other,” she says. “It’s an incredible resource for sharing information and best practices that builds the strength of individual communities. SVEDA is a valuable extension of the Joint Venture model for collaborating to focus on the quality of life in the valley.”

Given her background and previous success with a marketing approach to economic development, it’s not surprising when Snideman says her immediate goal as chair is to create and implement a marketing plan to brand SVEDA as a portal to Silicon Valley, an information source for new and existing businesses.

“I have talked with the other members and find common interest in sharing information on three topics in particular – how we are responding to the economic crisis, how we are funding projects and how best to use the Silicon Valley Index,” she says.

“There are as many different definitions of economic development as there are cities practicing it,” Snideman continues. “Through SVEDA each of us has access to a complete array of different economic development programs and philosophies and it helps us strengthen not only what we can offer in our individual communities but also how we can strengthen and promote the region.

“I personally want this area to be economically viable. It’s hard to see all my friends leave the second they start having children because of the lack of job opportunities or the cost of housing.”

She has also been the government affairs director for the San Mateo County Association of Realtors, executive vice president of the Building Industry Association of Kern County, a corporate banking consultant and software marketing executive.

"Laura is one of the most enthusiastic people I know,” says San Mateo County Supervisor Rich Gordon. “It is a trait that stood her well when she worked for trade associations and in her present position as someone who works to promote businesses and the local economy. I value the fact that Laura sees things from a regional perspective.

“She understands that we must work across governmental jurisdictions and build public-private partnerships if we are to maintain the strong economic base which is critical to assuring our local quality of life."

Snideman was born at Stanford Hospital to Nancy and Fritz Snideman, who raised Laura and her younger brother, Christopher, in the Napa Valley town of St. Helena before moving to the Peninsula.

“I personally want this area to be economically viable. It’s hard to see all my friends leave the second they start having children because of the lack of job opportunities or the cost of housing.”

Her father worked in a winery and was an avid angler and camper who instilled the call of the outdoors in his children and still accompanies them on backpacking adventures.

After high school, Laura attended the University of North Carolina at Chapel Hill, where she earned her undergraduate degree in international relations. She also holds a master’s degree in public administration from Notre Dame de Namur University in Belmont.

She was in Beijing teaching English and studying Chinese in the spring of 1989 when thousands of protestors mourning the death of a pro-democracy official staged a series of anti-government demonstrations in Tiananmen Square that ultimately led to a violent confrontation in which hundreds died.

“We were staying in a hotel near the square,” Snideman recalls. “Suddenly there’s a knock on the door and there were members of the U.S. Embassy staff telling us we could stay put or BE moved to a safer hotel, but we had fifteen minutes to pack one bag. We moved, although I never felt I was in danger. But as a result of that experience I began looking at the role of government in people’s lives.”

It was in San Carlos that she discovered her true niche. “I found that I really loved local government,” Snideman says. “You can be a positive influence and you get to know the people. It’s smaller and less government than working on the state or federal level, but it’s more personal and I like that.”

She cites the example set by former San Carlos Mayor Tom Davis, who would rise at 6 a.m. and go downtown to water the city plants in the years before an irrigation system was installed.

“That made a huge difference for the downtown environment, both attracting shoppers and diners and making people feel proud of their downtown,” Snideman recalls. “The impact of having a beautiful place to go makes a great difference for those businesses which, in turn, helps not only their lives but also has a positive effect on the revenue for the city to provide other services citizens want and need, like the library, parks and police.”

“You can be a positive influence and you get to know the people. It’s smaller and less government than working on the state or federal level, but it’s more personal and I like that.”

Among her proudest accomplishments in San Carlos, Snideman lists her role working with elected officials, citizens, developers, investors and non-profit providers on the development of a successful housing element section of the city’s general plan.

In fact, flight is among her passions, which she has indulged with hang gliding, hot air ballooning, glider flying and parachuting, although the latter induced a spell of motion sickness that will keep her from a repeat jump. She also enjoys horseback riding, target shooting, sailing, water skiing and scuba diving. Does this sound like someone with a poor work-life balance? What she would love to be able to do more often is travel internationally, especially to such far-flung locales as Bhutan and Africa. But when she’s not jumping out of planes or other active pursuits, she is quite content with the contrasting solitude of reading, jigsaw puzzles and needlepoint.

Snideman, who has now lived in San Mateo for the past fifteen years, enjoys showing off the Business Resource Center and is eager to give visitors a brochure listing more than 100 restaurants in the revitalized downtown area. She also keeps the freezer at work stocked with ice cream.

“You never know who might stop by and ice cream can sure help break other kinds of ice in the room,” she says. “San Mateo is such a central location for people who work in San Francisco and Silicon Valley,” she points out, “but there are also a lot of people who work and live and raise their families right here. We’re going to keep working to make it a great community.”

Kelly Mitter, executive director of the San Mateo Downtown Association, says the Business Resource Center has helped “countless numbers of business owners develop their skills, solve problems and enhance their success operating in the City of San Mateo.” She added that Snideman’s contributions to developing the branding strategy and strategic marketing plan for the downtown district has been equally important.

“The scale and scope of this project is something that our small non-profit organization would not have been capable of without her assistance and it could not have come at a better time,” Mitter says.