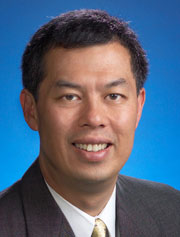 The way Cypress Envirosystems CEO Harry Sim talks about it, saving energy in old buildings by simply popping digital gauge readers on top of old manual ones is hardly rocket science. Except that Sim actually IS a rocket scientist, one whose mantra is to make complex things simple.

Mesmerized as a 6-year-old by the moon landing on TV in his native Hong Kong, it became Sim’s childhood dream to work in the space program. And he made it come true. At 28, he was the payload operations director for the June 1991 NASA Space Shuttle STS-40, the first mission dedicated to life sciences research in space.

But that was so long ago it doesn’t show up on his resume until page three. Not one to dally savoring a goal achieved, Sim always has the next one in sight, and he has reached a few more since then.

The Columbia had barely touched down when Sim left for the MBA program at the renowned Insead graduate business school in France. What followed was a successful 15-year career at Honeywell, where he held a number of senior roles in the Europe, Asia and the U.S.

Sim was in based in Phoenix 2006 when Cypress Systems founder and CEO T.J. Rodgers lured him away to launch a subsidiary that would modernize the management of energy systems in older plants and buildings.

“He took me to dinner at his favorite restaurant at Stanford,” Sim recalls. “T.J. had a history in green business and he wanted to focus on measuring and controlling energy use. We sketched out some ideas on the back of napkin and he liked them so much he asked me to join him.

“Climate Prosperity has the key elements for success – defining a compelling vision, and involving the right people who believe in the vision.”

“I had been away from the Bay Area since 1987 and this was a chance to build my own company. I like to get things done, solve problems. After a second meeting, I accepted his offer.” Cypress Envirosystems launched soon after, incorporated in February of 2007 and has grown to 40 employees in San Jose, San Diego and India, with a sales force in the U.S., Canada, Asia and Europe.

Sim’s predilection for getting things done is what drew him to join the Joint Venture board earlier this year.

“Joint Venture is all about action and problem-solving, including saving energy and sustainability in buildings,” he says. “I have a passion for that, and when Joint Venture announced its Climate Prosperity project and the Greenprint, I wanted to be part of the effort to move Silicon Valley to a new economy.

“Climate Prosperity has the key elements for success – defining a compelling vision, and involving the right people who believe in the vision. They have the commitment to go for it. When I met with Mayor Reed and some of the other business leaders involved, I thought these are people who can make things happen. I don’t join a lot, but Joint Venture gets things done.”

“Joint Venture is all about action and problem-solving, including saving energy and sustainability in buildings. I have a passion for that, and when Joint Venture announced its Climate Prosperity project and the Greenprint, I wanted to be part of the effort to move Silicon Valley to a new economy.”

Jack Bolick, who was Sim’s CEO at Honeywell’s Process Solutions division in Phoenix from 2003 to 2006, said Sim has a rare ability to be analytical at a high level and have a grasp of small details at the same time. Kind of like viewing Earth from a spacecraft one minute and molecules of sand through a microscope the next.

“Harry can get the big picture but also fit it into a granular level, from macro to micro,” said Bolick, now CEO of Adura Technologies in San Francisco. “He’s very intuitive to the marketplace, able to build high level value propositions.”

Sim inherited an entrepreneurial spirit from his father, Andrew, who ran an import-export business in Hong Kong before moving the family to Edmonton, Canada when Harry was 11. He has two younger sisters, one now a doctor at UC San Francisco and the other an attorney in Toronto.

When he was a junior in high school, Harry transferred to an exclusive prep school in western Massachusetts that helped pave the way for his admission to Stanford University in 1980.

“I watched a lot of ‘Star Trek’ back then,” he recalls. “I still had the dream to work in the space program. I knew I needed to go to engineering school and Stanford was near NASA Ames in Mountain View.”

A year later, Sim joined the GE Space Systems Division, working on the space shuttle project. By the time the shuttle was finally ready for launch three years later, Sim had contributed so much to development of the science research that he was sent to the Johnson Space Center in Houston to take personal command of the mission payload.

“Harry is simply brilliant, always two to three steps ahead of the group,” said Eric Gawehn, who has known Sim since 1986, working with him at NASA and now as the mechanical engineering director with Cypress Envirosystems. “He’s a natural leader, able to lead large teams and keep his people motivated.”

Just when the Columbia mission ended, Sim said, Europe was calling. “It was an exciting time. The European Union was being formed, the cold war was ending, and the cultural and business opportunities were growing, so I moved to Paris.”

Sim completed his MBA at Insead in 1992 and joined Honeywell as manager of business development in Europe, based in Brussels, Belgium. He rose steadily in the company, becoming director of mergers and acquisitions for Europe, moving to Hong Kong as director of strategic planning for Asia Pacific and later vice president and general manager of control products for the region.

“One reason I wanted to come back to Silicon Valley was to have more control over my life.”

In 2000, he moved to Beijing as the founder, president and general manager of myConstruction.com, a Honeywell project to enhance the productivity of the construction industry in China.

Sim met his wife, Aline, a software engineer, in a Los Angeles disco when he was new to NASA/Ames. “We were surprised to find that we were both living and working in Mountain View at the time, and we spoke the same Chinese dialect.” They married in 1987, and their son, Jordi, now 14, was born in Brussels.

“One reason I wanted to come back to Silicon Valley was to have more control over my life,” says Sim, who was flying upwards of 250,000 miles a year at his peak. “I definitely made a lot of sacrifices working for a Fortune 500 company.”

Running a company, traveling the globe, contributing to Joint Venture and building a family would be a personal work-life challenge for any CEO. It is at times for Harry Sim, too. But it’s not rocket science.