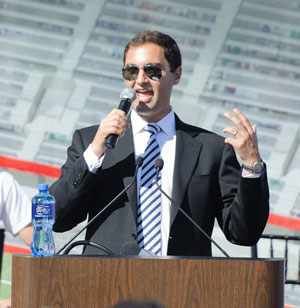 The Silicon Valley Business Journal has twice ranked Dave Kaval among the region’s “40-Under-40” young leaders to watch, including this year. But he won’t be making the list again.

“I can’t believe I’m 40!” he told a visitor to his office at Avaya Stadium on his birthday, October 28. But there was no day off for him – he’s having too much fun. “It’s surreal to be making a career out of something that’s been a passion for me all my life.”

Kaval, who became president of the Earthquakes five years ago, is savoring the team’s first season in its new $100 million, 18,000-seat stadium that sold out all fifteen home games since it opened across from San Jose airport in March.

Although the team struggled with inconsistency on the field, Kaval has certainly elevated the Earthquakes’ standing among fans, sponsors, media and the MLS through innovative marketing, high-tech stadium amenities and social media.

“The stadium has been received so positively,” Kaval says. “It won the Product Innovation Award at the 2015 Stadium Business Awards in Barcelona in June.” Honored as the first cloud-enabled MLS sports venue, Avaya Stadium was built from a “European-inspired design for an American team,” says Kaval.

“You never know how it’s going to turn out, but the idea resonated with our fans and it exceeded my wildest expectations,” Kaval says.

The project started back in October 2012 when a Guinness Record 6,256 people gathered at the site on Coleman Avenue and turned dirt for two minutes in the largest participatory groundbreaking ever. Avaya Stadium has the only field-level suites in pro sports, a 576-seat field level patio club, HD LED Fascia video boards, two party decks, a fan engagement wall and the largest exterior bar in America. 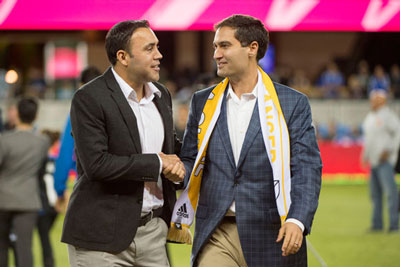 “Soccer is growing in popularity in the U.S.,” Kaval says. “Attendance is averaging 20,000 per game, more than the NBA or NHL, and the MLS has an $800 million television contract.”

Kaval, a Stanford University graduate in international relations and economics with an MBA in entrepreneurship from the Stanford Graduate School of Business, has forged enough new corporate partnerships with a number of major Bay Area companies to produce a fifty percent increase in revenue for the team.

Even on his birthday Kaval was heading for a meeting with another potential big sponsor to enhance the team’s $25 million budget.

“Dave is an entrepreneurial impresario,” said George Foster, the Konosuke Matsushita Professor of Management at the Stanford Graduate School of Business, who taught Kaval in his sports management class and was later instrumental in recommending Kaval for the Earthquakes role.

“People’s eyes light up when Dave starts talking about his ventures to engage with the fans,” Foster continued. "He has a remarkable ability to generate excitement around his ideas. That’s a very precious skill in entertainment. When (Earthquakes co-owner) John Fisher asked me about a good person to run the Earthquakes,” added Foster, “he said give me three names you would recommend and I said, Dave Kaval, Dave Kaval, Dave Kaval.”

“People’s eyes light up when Dave starts talking about his ventures to engage with the fans. He has a remarkable ability to generate excitement around his ideas. That’s a very precious skill in entertainment.”

At the same time Kaval is building new corporate relationships, he is collaborating with his front office partners, general manager John Doyle and other soccer operations staff to strengthen the 30-man roster for 2016.

“All of us on the executive team are heading out to a retreat tomorrow to plan for next year,” he said.

Off the field, says Kaval, his biggest issue has been the parking and traffic problems around the stadium, which has only 6000 parking spots on game days. He’s also focused on increasing youth participation in the Earthquakes Academy for young players.

“Dave has an infectious enthusiasm, an amazing sense of spirit that immediately draws you in to him,” says Dan Gordon, co-founder and chief operating officer of Gordon Biersch, who has known Kaval for years.“You hear raves about Dave up and down. He’s persistent in a smart way. He’s able to overcome adversities. That’s how Dave built what I think is the finest stadium of any type in sport.”

The team’s front office staff likes the boss so much that for his birthday they presented him with a framed Earthquakes jersey emblazoned with the number 40 and the words, “Happy Birthday, Mr. President.” 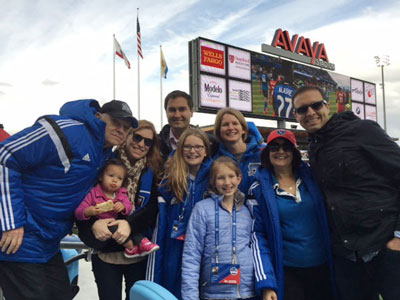 Kaval’s commitment to community affairs as a key component of the team led him to Joint Venture. He says the Earthquakes’ three foundational pillars of success – Unity, Devotion and Heritage – are “all enhanced by partnering with Joint Venture.”

“We’ve been here for 41 years,” he says. “We’ve been connected to the community for a long time and we want to be a proper steward for education, wellness, housing and traffic. It’s very important to us.

“Joint Venture allows us to work with other like-minded people in business, government and the community,” he adds. “The Earthquakes want to be a thought leader in the region.”

Kaval’s passion for sports flourished in his hometown of Cleveland, where he followed the Indians and the Browns growing up. His actual season seat from Municipal Stadium, which was demolished in 1996, sits in his office at Avaya Stadium.

As Stanford seniors in 1998, Kaval and his best friend, Brad Null, followed the Cardinal basketball team to the Final Four basketball tournament in Texas just about the time the Major League Baseball season was beginning.

“Joint Venture allows us to work with other like-minded people in business, government and the community.”

They enjoyed that trip so much that they decided then and there to embark on what became their “Baseball America Tour,” a 15,000-mile, 38-day road trip to visit every Major League ballpark that summer.

“Everyone said we were crazy, that it would be too expensive, that we couldn’t do it,” says Kaval. “Well, when people tell me I can’t do something...”

On June 20, six days after graduation, the pair loaded into Null’s Nissan Pathfinder and set off on the journey across 34 states and Canada, starting at Candlestick Park (then 3Com Park) and finishing at Kauffmann Stadium in Kansas City.

Kaval and Null wrote a book about the odyssey, “The Summer That Saved Baseball,” and the trip left Kaval with a number of indelible impressions.

“More than anything it gave me a real awareness of the fan experience,” the best parts of which he is incorporating into Avaya Stadium wherever possible.

He has also traveled widely to Europe and South America to learn as much as possible about soccer’s international appeal.

After his undergrad years at Stanford, Kaval worked with Accenture Strategic Services, a tech marketing startup, and as a budget manager for National Security in the Office of the President of the United States before going to grad school.

For his MBA project in 2003 he and another classmate developed a plan for and co-founded the Golden Baseball League, whose players included such renowned former MLB pros as Rickey Henderson, Jose Canseco, Jose Lima and Mark Prior.

Dave spent seven years developing the league, which started with eight teams and eventually grew to 16 ball clubs as it merged with other leagues. Kaval left the business in 2010 to join the Earthquakes.

Dave is also a lecturer in sports management at the Stanford Graduate School of Business, serves as a director of the Workforce Investment Board in San Mateo County and sits on the boards of the San Jose Sports Authority and the San Jose/Silicon Valley Chamber of Commerce.

Dave and his brother, Peter, were born to Jim Kaval, a real estate developer, and his wife, Paula, a Realtor, and grew up in an Ohio suburb.

“It was a traditional Midwest upbringing,” he says. “We had a big family so there were a lot of family events, big dinners, parties.”

Dave took an early interest in flying and started learning to fly before he could drive. He qualified for his pilot’s license at 17. “Flying was always a very cool thing to me,” he says. “It builds confidence and maturity.” 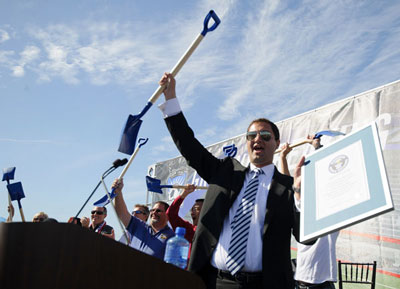 Kaval was accepted to Stanford and in 1994 drove his old Mustang across the country to start school as an international relations major.

It was not only his first time in California, but on his very first day at school, settling in to the Oterro freshman dormitory, he met computer science student Maria Fredricsson, who would become his wife. Today she is a senior director in engineering at Oracle.

The Kavals have two daughters, Stella, 12, and Annika, 10, who enjoy gardening and cooking with their dad, and most family activities tend to center on the Earthquakes and hosting game day get-togethers with friends at the stadium.

He runs for exercise when he can make the time amid his many duties. But don’t expect Kaval to slow down any time soon, even now that he’s reached the ripe old age of 40.