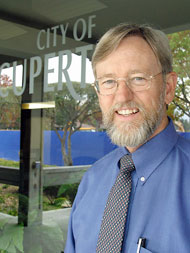 One of the more popular nuggets of wisdom from legendary Yankees catcher and clubhouse philosopher Yogi Berra might as well have been aimed directly at Dave Knapp: “When you come to a fork in the road, take it.”

The personable Cupertino city manager, who will turn 70 next year and shows few signs of slowing down, has faced a series of turning points throughout his life. Somehow, he always seems to know instinctively which direction to choose – the one with the best outcome.

Deciding between the military or the ministry, West Point or a liberal arts college, engineering or public administration, living in Texas or California – even managing Los Gatos or Cupertino – Knapp has always taken the path that produced the ideal result for himself, his family and his community.

In some cases, he even figured out how to take the fork in the road both ways. In his current role since 2000 and as Los Gatos town manager for ten years before that, Knapp has spent two decades shaping both local government and regional policy through a public service career and community involvement that has earned him numerous awards and accolades.

“The government and the community are the same thing. People have to take responsibility for themselves and each other.”

“My idea is that people are the government,” he said the other day in his office. “The government and the community are the same thing. People have to take responsibility for themselves and each other.

“This is the Wild West. We have earthquakes, fires, mud and floods – the four seasons of California. Everyone should be ready. The first responder to an emergency is most likely the person who lives next door. We’re all in this thing together.”

Knapp’s government-of-the-people, by-the-people approach suits him well to his role on the board of Joint Venture, which he joined last year.

“I am passionate about building community,” Knapp says. “My other passion is changing state government. I am frustrated with state government and I really liked what Joint Venture was doing to promote reform. A small group of determined people can cause change to happen.”

Rector Karen Siegfriedt of St. Jude’s Episcopal Church in Cupertino, where Knapp is an active member and past board member, calls Knapp a “servant leader” who “looks at what needs to be done and does it,” both in the church and in the community.

“You are lucky to have him on your board,” added Rev. Siegfriedt. “Dave is a very spiritual and faithful person. He notices and cares about people. He is very compassionate and open to diversity.”

Much of Knapp’s spirituality and value system came from his upbringing as the son of an Episcopal minister and schoolteacher growing up with a brother and two sisters in Harrison, New York and later in San Antonio, Texas.

Knapp was only eleven when his father died of cancer at the age of 42, an event Knapp says was “formative” for him and that started him on an early path to independence. Seeking both direction and discipline, he enrolled in the Texas Military Institute, the flagship private college preparatory school of the Episcopal Diocese of West Texas. From there, he could have gone to West Point. Instead, he chose the University of the South, a 500-student, liberal arts men’s college in Sewanee, Tennessee, that also serves as a seminary of the Episcopal Church.

“I thought a lot about going into the ministry, and decided to go to Sewanee and study philosophy.”

With his philosophy degree in hand, Knapp signed up for two commitments at about the same time in 1963. First, he married his longtime girlfriend, Kay, whom he had met ten years earlier in a church youth group when he was 13 and she was 11.

Then he enlisted in the Air Force, where he learned defense systems evaluation and simultaneously picked up MS degrees in systems management and education at the University of Southern California.

“I am passionate about building community,” Knapp says. “My other passion is changing state government. I am frustrated with state government and I really liked what Joint Venture was doing to promote reform. A small group of determined people can cause change to happen.”

Knapp became a specialist in electronic counter measures, and when his enlistment ended, the Air Force lured him to re-enlist with the promise of an assignment in Germany.
“I love to ski,” he said, “and I figured Germany would be a great place to be for skiing, so I agreed to go.”

Upon his retirement from the Air Force as a captain in 1970, Knapp took discharge aptitude tests to learn which of his skills would best suit him in the civilian work force. His score indicated a proclivity for public administration, a career he had not previously considered.

Knapp took a job as an assistant director of San Diego’s Model Cities program, where he discovered his passion for public service and community building. After ten years there, he interviewed to become deputy city manager of Boulder, Colorado.

“During the interview I noticed several pairs of skis along the wall in the office, and I asked about them,” Knapp recalls. “He said that after the interview was over they were all going skiing and asked me if I would like to go with them. That was it for me – I was offered the job and I took it right away.” Eventually the cold Rocky Mountain winters had them longing for a return to California and Knapp began searching for opportunities here. In September of 1990, Knapp was hired as the town manager for Los Gatos.

“After ten years there, I was getting ready to retire,” he says, “but I was only 60 and I had the opportunity to go to Harvard’s John F. Kennedy School of Government Programs for Senior Executives. It was something I had always wanted to do. It was life-changing for me.”

With his passion for building community energized by the Kennedy School, Knapp applied for and won the city manager post in Cupertino in the summer of 2000. There he has established a block leader program that now boasts 340 block leaders, and presided over a capital improvement program that includes new senior, teen and sports centers, a 53,000-square-foot library, a community hall and civic plaza.

His signature achievement is a cable-stayed bicycle and pedestrian bridge spanning Interstate 280 and a 66-acre park along Steven Creek that included creek restoration, an 800-person picnic area and a bike/pedestrian trail.

“Dave completely understands the role of city manager,” said Mark Linder, director of Cupertino’s parks and recreation department and a former assistant under Knapp in Los Gatos. “He is very professional, very fair, and fiscally conservative. He listens to everyone and is responsive to any community concern. And he can be very funny.”

With a decade in Cupertino behind him, and his history of changing jobs and cities every ten years or so, the question arises: what are his future plans?

“I’m not planning on going anywhere soon, but I do love being a grandfather,” Knapp says, referring to his three young grandsons. Stephen and his wife have two boys, 5 and 3, while Michael and his wife have a 6-month-old son.

“Stephen lives in Chicago and Michael lives in Denver,” says Knapp. “Now that they both have children, we are trying to get back to see them as often as we can.”

It sounds a lot like Dave Knapp is coming to another fork in the road. Chances are pretty good that he’ll take it.