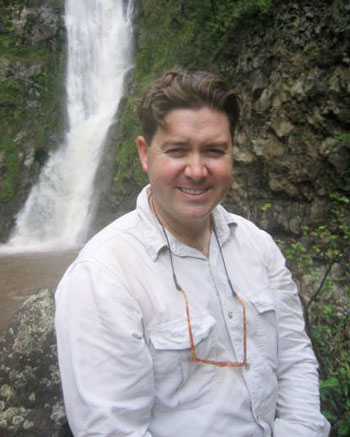 Like most people in the Bay Area, Jonathan Stock remembers exactly where he was at 5:04 p.m. on October 17, 1989 when the Loma Prieta earthquake struck the Bay Area.

Stock, a research geologist, Director of the U.S. Geological Survey’s Innovation Center in Menlo Park and an active partner in Joint Venture’s climate response work, was in his Cowell College dorm at UC Santa Cruz.

“Pretty much ground zero,” he recalls of the 6.9 magnitude quake. “The shaking was so strong and the bright afternoon sun was blinding me through the window, so my first thought was, it’s a nuclear detonation. This is it, war.

“Once I realized it was a major earthquake, my second thought was that I’m in one of the oldest dorms on campus.”

Geologic hazards have always enthralled Stock, who endured the quake and went on to earn his bachelor’s degree from UC Santa Cruz, a master’s from the University of Washington and a Ph.D. from UC Berkeley, all in earth sciences.

Last October, Joint Venture and the U.S. Geological Survey created a partnership to address regional challenges from natural hazards, climate and land use change, and continued availability of clean air and water resources. Such challenges include the effects of earthquakes, sea level rise, landslides, greenhouse gas emissions and drought.

“My job is to identify the big problems we face in common and align the scientists, decision makers and the constituencies,” Stock told a recent visitor to his aging and austere office in Menlo Park. The building is part of the USGS campus and dates back to 1954. 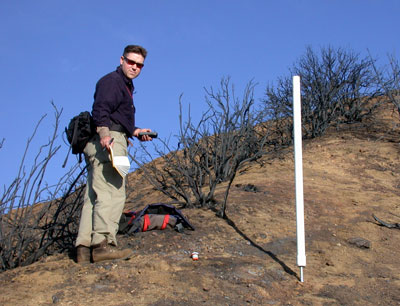 Behind him, small chains are affixed across the middle of every bookshelf to keep books – some of them science volumes dating back more than a century – from hurtling off in a major quake.

“I still use some of them,” he says, pulling out a volume on forest fires from the 1870s.

Yet it’s sea level rise, not earthquakes, that’s occupying Stock’s attention of late. Bay waterfront lands are threatened by a rise of 10 to 25 centimeters by mid-century.

“That may not sound like much,” says Stock, “but at the same time, our land is sinking. From 1854 to 1967 parts of Santa Clara County sank up to 13 feet as its foundation of unstable soft sediment compacted with ground water pumping. That particular problem is now under control, thanks to Santa Clara Valley Water District, but we need new methods to map those changes to avoid them in the future.

“If we ignore the increased vulnerability related to vertical land motion, over 250,000 people and $60 billion in property along the San Francisco Bay shoreline are exposed to flooding in the next century.”

Stock characterizes the USGS role for the nation as having four basic functions: charting and mapping the physical and biological world; building situational awareness of hazards those worlds pose; combining those first two items to forecast or warn of impending threats to the region; and communicating the science to the public, decision makers and the administration through the USGS parent agency, the Department of the Interior.

Michael Marlaire, the longtime director of the NASA Research Park at NASA's Ames Research Center and now director of special projects for Joint Venture, initiated the partnership with the USGS.
“I call him ‘Michael the Seer,’ because he just sees things that need attention,” says Stock. “He came to me last fall and said we ought to be engaging with Joint Venture.

“We are now completely engaged with the Joint Venture mission,” Stock continued. “You guys are the stem wrapper for the valley. We think of this campus here in Menlo Park as the monastery, and we are trying to push to get outside the walls to work with the other sectors in the region. Joint Venture opens those doors.”

Stock says the partnership is still evolving and that he expects to marry his research with new technologies and regional collaboration to address such challenges as sea level rise and subsidence.

“Basically, it’s how will Silicon Valley save the nation?” says Stock.

Joint Venture Silicon Valley recently received a grant of $83,000 from the USGS to assist with development and rollout of its “HayWired” earthquake scenario. The grant is funded through the Science Application for Risk Reduction (SAFRR) program at USGS.

“We are now completely engaged with the Joint Venture mission. You guys are the stem wrapper for the valley.”

“HayWired is an important scenario that looks at the effect on Silicon Valley and the larger San Francisco Bay Area of an earthquake sequence triggered by a magnitude 7.05 earthquake on the Hayward fault,” says Stock.

Stock also returned recently from a research trip to study volcano activity on the island of Hawaii, where the goal, he says, is to keep the water surrounding the island “blue, not orange or brown” from erosion and runoff.

“I have to say he is truly a visionary,” said Colin Williams, director of the USGS center and Stock’s supervisor. “It’s a word that gets thrown around Silicon Valley a lot but not around the USGS. “He’s one of those people who not only sees where they need to go, where the organization needs to go and where our science needs to go, but has the dedication to try to move us in that direction.”

“Some of it is John’s personality and some of it is rooted in the particular science and research John does and the challenges he’s faced in getting support for that research. He brought Joint Venture up to me as an idea, and I agreed that we need to look at new ways of making public and private partnerships.”

Stock is a native San Franciscan who grew up in the Richmond District with his parents, John, an economist who taught at the University of San Francisco, and Patricia, an elementary school teacher, and his younger sister, Mary.

“We moved around a lot while my dad took jobs at Boeing and Northrup Grumman,” says Stock. “I ended up finishing high school in Sacramento.

“He’s one of those people who not only sees where they need to go, where the organization needs to go and where our science needs to go, but has the dedication to try to move us in that direction.”

“When I was a kid my dad would take me hunting for dinosaur bones in Nevada – it was a hobby of his – and it was always an attraction for me. I wanted to do something outdoors and with technology.”

Stock went straight through undergraduate and graduate schools to earn his BS, master’s and doctorate before starting his career, which has included visits to Mount Pinatubo in the Philippines, the Comoros Islands of East Africa and other spots where geologic events have impacted human history.

Stock met his wife, Ana, a native of Sarajevo who works in investor relations at a biotech company, during a research trip to the Long Valley volcanic caldera in the eastern Sierra in 1998. They were married in 2005 and have two children, Tea, 9 and Ella, 4.

Ana and the children are spending the summer with her family in Croatia. Jonathan will leave soon to join them for a month before the family returns to their home in the Inner Sunset District of San Francisco. 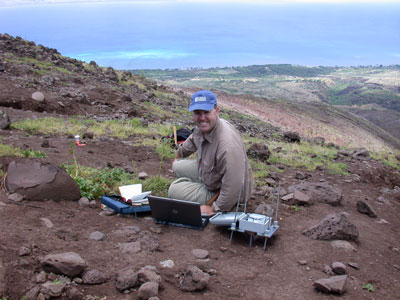 In his free time, Stock enjoys reading history, swimming, jogging, sailing and refinishing wood. He also has a collection of flags and historic headwear, much of it military.

“They are tangible pieces of history that I enjoy having around,” he says. “The hats are conversation pieces at parties, something interesting that I look for when traveling and they remind me of the captain’s hat our old landlord bought me for sailing around Sausalito when I was a kid.”

“He’s not your average government worker,” says his neighbor and friend of ten years, David Dowdney, Western region senior vice president for Columbia Property Trust in San Francisco. “He’s kind of entrepreneurial, a force of nature. He’s younger, with the energy and desire to grow the Survey and tie it into the modern world.”

Dowdney says that for all of Stock’s seafaring skills, “he once fell off my boat. We were at the dock with all the wives and kids on board. He takes the stern line with one leg on the dock and one on the boat. Then he does the splits and plops into the bay. When he climbed back aboard he said, ‘My center of gravity appears to have shifted with age.’”

At that moment, one might imagine Stock was more concerned than ever about sea level rise.