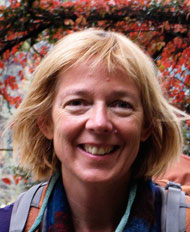 Just when you think you are doing well managing a rewarding and purposeful career balanced with a busy, healthy personal and family life, you meet someone like Caroline Judy.

No wonder a getaway for Judy goes beyond the norm. She just returned from trekking through the sacred and serene Langtang Valley known as the “Valley of the Glaciers,” in Nepal, with a girlfriend and one guide.

“Nepal was a truly amazing experience,” says Judy of her first visit there, although she is a lifelong outdoor enthusiast. “We trekked two and half days, climbing from 1100 meters to 3700. We went through five different climatic zones, from tropical to high alpine. You get such a feeling there of freedom, of ‘oneness,’ as the Buddhists say.

She also noticed the stark absence of infrastructure in the villages and lodges where they stayed. “No sewers, no running water, no electricity, no heating, air conditioning or refrigeration. Open fires indoors.”

“We trekked two and half days, climbing from 1100 meters to 3700. We went through five different climatic zones, from tropical to high alpine. You get such a feeling there of freedom, of ‘oneness,’ as the Buddhists say.”

Infrastructure, of course, is integral to Judy’s workaday role with Santa Clara County, which includes administrative and budgetary management for five million square feet of county facilities, a fleet of 2700 vehicles and equipment, and an annual utility bill of $27 million.

The cost of energy is a key reason she has taken a lead role in Joint Venture’s collaborative effort to form a power purchasing pool with municipal governments and agencies in Silicon Valley. (See article about this initiative in the December 2009 newsletter for details.)

“I believe the government has a role in working to achieve broad public policy goals,” Judy said the other day in her second floor county office on North First Street. “Joint Venture understands the importance and benefits of using collaborative procurement of energy in the deployment of technology.”

She believes the Silicon Valley PPA effort is the first in the nation to bring multiple government entities together to purchase energy.

“The challenge is that a lot of cities have their own ordinances and policies, so the art of persuasion is important, but fortunately the collaborative benefits of a power purchase agreement are quantifiable.”

Judy has been with the county since 2005, following seven years in the office of Supervisor Jim Beall, and earlier positions with the Center for Economic Policy Research at Stanford University, and software makers MIPS Computer Systems and Tekronix.

“Joint Venture understands the importance and benefits of using collaborative procurement of energy in the deployment of technology.”

“She was great to work with, so knowledgeable, considerate and willing to help people,” said Lee Sturtevant, who worked with Judy in Beall’s office and is now a policy aide to Supervisor Ken Yeager. “I think the world of Caroline. She is very committed to doing the best possible job she can do for the county.”

Raised in Toronto by American parents, Judy’s father, Richard, was a professor of economics at the University of Toronto while her mother, Rachel, an anthropologist, raised Caroline and her two brothers and two sisters.

After finishing high school, Judy enrolled at Reed College in Oregon, where she earned a BA in economics. Portland was also where Judy met her husband, Jeff McMeekin, a native San Franciscan. They soon moved back to San Francisco when Jeff took a job with Sun Microsystems, where has been for the past twenty-five years. He is currently a product marketing manager.

In 1988, their son, Kiernan, was born, and three years later, daughter Kelly arrived. Today the family makes their home in Palo Alto.

Judy took time off from her career while the kids were growing up, but she used the break to earn a master’s degree in political science as Stanford. “I remember using the Joint Venture Silicon Valley Index in my research there,” she recalls. “After being out of the workforce ten years, I wanted to get into local government.”

In 1998, she landed the first job she applied for, with then-supervisor Beall. Her background in economics and political science soon led him to appoint Judy as his chief of staff, a role with myriad duties that included managing initiatives, overseeing fiscal policies and serving as liaison to other elected officials, staff and the media.

She took her present position with Santa Clara County in 2005. In addition to managing county property and vehicles, Judy is responsible for policy vision, adoption and development of Green Building, Climate Change, 10-Year Fleet Plan and revision of Capital Program Funding policy and department performance metrics.

In addition to her work with Joint Venture on power purchasing, she also contributes to the county’s disaster preparedness efforts.

Somewhere in between her busy county schedule, family activities and high country backpacking trips, Judy manages to train for and compete in triathlons up and down the state. She placed second once and third twice in events this year.

Not all her passions take her outdoors, incidentally. She has also been studying piano as an adult for the past fifteen years, taking weekly lessons.

“Every Tuesday at 7 a.m., without fail,” she says. “Right now I’m working on a Bach fugue and a Chopin nocturne.”