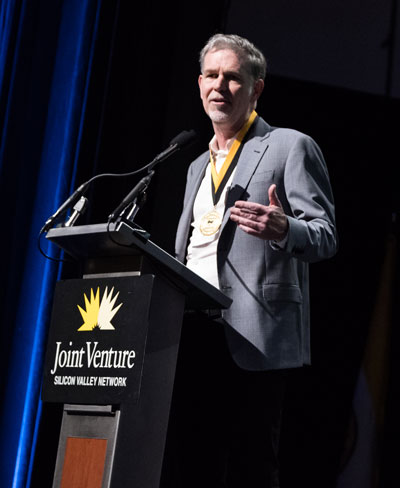 Good afternoon, everyone, and thank you for joining us today.

Well, it’s sure starting to look like 2017 is destined to be Reed Hastings’ year – and not simply because Netflix is celebrating its 20th anniversary.

To begin with, as filmmakers he and Netflix are celebrating their first Golden Globe awards, with wins last month for “The Crown” as best drama series and for its star, Claire Foy, as best actress in a drama series.

On top of that, they have just received Academy Award nominations for their documentary, “13th” and two other documentary shorts. We wish them luck at the Oscars next Sunday night.

And now this, the Packard award, perhaps the most important recognition of all.

As a former Hewlett-Packard employee, I can say that, like David Packard, Reed Hastings brings the same sleeves-up, problem-solving approach to improving our community.

He has not only established himself as the leader of one of America’s, and Silicon Valley’s, most successful companies, but at the same time he has devoted much of his personal energy, time and resources to supporting better education outcomes for our kids.

I have personally witnessed Reed’s commitment to helping improve the lives of others—in particular, low-income, underserved minority students, especially Latinos. He has dedicated much of his time to ensuring that these students have access to a quality education.

In his role as a board member with our Hispanic Foundation of Silicon Valley, he conceived our “Latinos in Technology” scholarship program, designed to increase the number of Latinos employed in hi-tech by increasing the number of college graduates with STEM degrees.

He saw that the future of our workforce resides in our local neighborhoods. His foundation, The Hastings Fund, has pledged $1 million to this much needed scholarship effort.

Now let’s take a look at Reed’s life and achievements.

Reed was born in Boston in 1960, the son of Wilmot Hastings, a government lawyer, and his wife, Joan.He went to Bowdoin College in Maine, where he earned his Bachelor’s degree in math in 1983.

“The impact of his contributions and efforts on behalf of our kids will be felt in Silicon Valley for many years to come.”

After graduation, propelled by a curiosity of the world and a desire for community service, Hastings joined the Peace Corps. He was especially drawn, he says, to the challenge of the Peace Corps slogan: “the toughest job you’ll ever love.”

For the next two years he taught math to high schoolers in Swaziland in South Africa. That experience informed his early passion for improving public education.Reed then returned to the U.S. to enroll in graduate school at Stanford University, where he studied artificial intelligence.

In 1988 he earned his Master’s degree in computer science from Stanford, then held a couple of early positions before joining adaptive technology, a maker of high-speed switches founded by CEO Audrey MacLean.

In 1991 Hastings and two other men founded Pure Software. Five years later Pure merged with Atria Software and by 1996, when Rational Software acquired the company, Hastings had accumulated enough of a stake to launch Netflix.

The story is well known. Reed had racked up $40 in late fees on the rental of “Apollo 13” from a local video store.At the time, he belonged to a gym that charged a single monthly fee for unlimited workout visits. That seemed to him like a much better business model.

Reed and a colleague from pure software, Marc Randolph, founded their fledgling movie rental company in August 1997, offering a paid monthly subscription with no due dates or late fees.

In the parlance of video, let’s fast forward twenty years. Today Netflix is the world’s leading internet television network, with over 93 million members in more than 190 countries enjoying more than 125 million hours of TV shows and movies per day.

But, ladies and gentlemen, as successful as Reed Hastings has been, we are not celebrating him today because he is the CEO of Netflix.

Packard understood that to fully succeed, people must step outside of their normal role and think more broadly about our region and how they can make it better.

Just as Netflix was getting started, Reed went back to Stanford to study for another advanced degree, this time in education policy, so he could find new ways to make a difference.

Netflix grew so fast that he wasn’t able to finish, but he left the program with a stronger passion and commitment to activism in education philanthropy and politics, charter schools, and better education outcomes for children.

In 2000 Reed spent $1 million of his own money to promote and pass Proposition 39, a state constitutional amendment to make it easier to pass state school bonds. 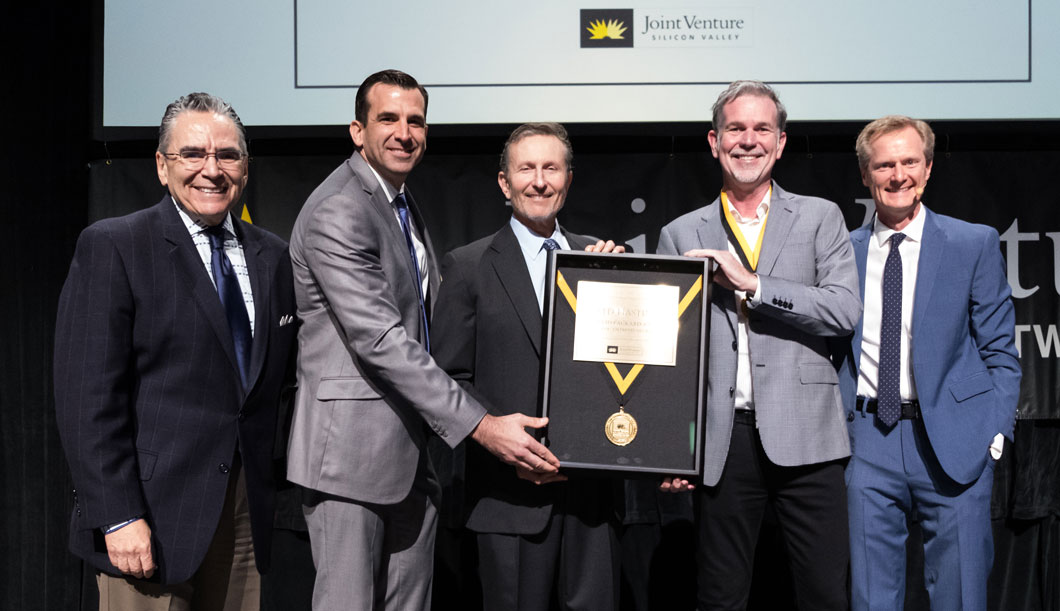 That same year, Governor Brown appointed him to a four-year term on the state school board, which he served as president.

In addition to his own board, Reed also serves or has served on the boards of the Kipp foundation, Dream Box Learning, Pahara, the Hispanic Foundation of Silicon Valley and Facebook.

He is a member and former president of the Technology Network, an organization of business executives that promotes tech growth and innovation.

Last fall, Hastings founded his own $100 million philanthropic foundation, The Hastings Fund, starting with significant donations to the Hispanic Foundation of Silicon Valley, as I mentioned earlier, and to the United Negro College Fund.

The impact of his contributions and efforts on behalf of our kids will be felt in Silicon Valley for many years to come.

It is this kind of civic entrepreneurship that merits Joint Venture’s choice of Reed Hastings this year for its most distinguished honor.