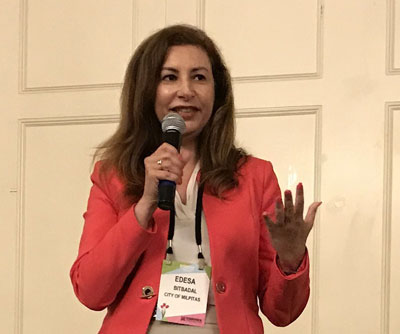 Milpitas may not be the first city that comes to mind as a hotbed of Silicon Valley for its growth in innovation, housing, shopping, recreation and entertainment, but Edesa Bitbadal is betting that it will be before long.

With its recent vibrant progress in tech, transportation, commercial development and services, Milpitas is the fastest-growing city in the region, second in California and eighth in the U.S.

“I love my job!” says Bitbadal, who joined the city as economic development manager in 2014, became director last year and has been busy building a new marketing strategy. “It’s an opportunity to rebrand Milpitas as a destination not just a crossroad or a place people pass by on the freeway.

“With BART coming,” she adds, “we’re adding 7000 units of housing and mixed use development. Also, Lyons Living and Virgin Hotels are building a world class hotel here with 200 rooms and 200 thousand square feet of commercial space. It will reenergize the area with a new urban lifestyle that includes fine dining and night life.”

BART is expected to open its Milpitas station by next spring, connecting the city with 25 other Bay Area cities, including a one-hour train ride to San Francisco. The Milpitas BART station will serve an estimated 20,000 riders a day.

“She has a real flair for Milpitas. She understands the uniqueness of our community, what the priorities are and what drives it.”

Just seven miles from Mineta San José International Airport, Milpitas is home to such high-tech companies as Cisco Systems, KLA-Tencor, FireEye and many others that bring 41,000 workers to the city every day.

Milpitas, she notes, is home to some of the most innovative advanced manufacturing companies such as Flex and View Glass. These companies specialize in developing products used in health, safety, consumer, security, and construction of smart energy efficient glass in order to increase the workforce productivity. Companies choose to locate and expand their business in Milpitas because of its location and existing amenities available to their workforce.

“With ample new housing, regional transportation, and countless amenities, Milpitas is a prime location for investment and for companies to locate,” says Bitbadal. Within five years, everything that CEOs desire for their workforce will be located here in Milpitas.”

In addition to economic growth, the city has quality schools, bike paths, hiking and horseback trails, golf courses and more than 450 restaurants. A 20-screen cinema has been revamped and there’s even a boutique winery, Big Dog Vineyards, in the hills above the city.

“I think the world of Edesa,” says Milpitas acting city manager and police chief Steve Pangelinan. “She has a real flair for Milpitas. She understands the uniqueness of our community, what the priorities are and what drives it.

“She is very good at what she does," he adds. “She’s a people person who’s able to make personal connections. That’s a tremendous strength in her business, an absolute must for what she does, and she does it on a daily basis with people in the community. She never stops working and avails herself to people when needed, on weekends, on nights, even on vacation.”

“The more you know about Milpitas, the more you like it,” she says. “Our biggest challenge is keeping up with demand — hiring the people we need for the building department, inspectors and permitting.”

Bitbadal says younger families are attracted to the city by its small-town feel, diversity, services, and affordability relative to other Silicon Valley cities. The median age in Milpitas is 37. Sixty-two percent of the population is Asian, with Caucasians, Latinos and others making up the balance. Nearly all new arrivals are dual income families, she says.

“I first became aware of Joint Venture’s work years ago when I began attending SVEDA meetings,” says Bitbadal. “Also, the data in the annual Silicon Valley Index is so valuable. State of the Valley is one of the most important meetings of the year for me.” 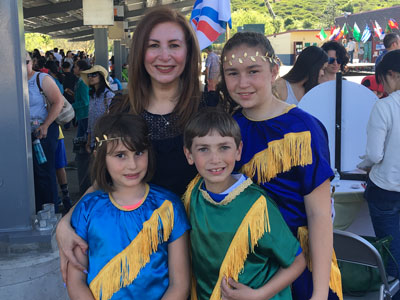 Becoming active in Silicon Valley EDA was important to her, she says, to enhance her efforts around business retention, expansion and recruitment.

“We are part of Silicon Valley and it’s very important to exchange information and work together with other cities. I put a lot of value in SVEDA.”

“She has a very open and honest personality that shines through,” says Al Savay, Community and Economic Director for the City of San Carlos, where Bitbadal served as economic development coordinator for two years prior to Milpitas. “She’s a self-starter, a very hard worker and a good people person with the right kind of makeup to make things happen.

“She also has really good marketplace acumen and understands the way small businesses work. She was able to help our local economy prosper by bringing businesses in and making the right connections. Edesa is very good at getting buy-in on ideas and initiatives.”

Bitbadal was born in Abadan, Iran, an oil refinery town, but grew up in Tehran. Her father, Dr. Andrei Bitbadal, was the Chief of the International Relations of Veterinary Organization of Iran and Director of Animal Quarantine Services with the Ministry of Agriculture. Her mother, Evelyn, was a middle school teacher. They were proud of their careers in public service, which became great examples for Edesa.

By 1985, her country’s Islamic fundamentalist government would not permit a girl to have the full rights to education and a career, so the family moved to the U.S. when Edesa was 13.

“My parents wanted a better life for our family,” she says.

The family settled in Burlingame, where her uncle lived, and Edesa attended Burlingame High School for three years until they moved to the Almaden section of San Jose and she finished at Leland High School in 1989.

“The data in the annual Silicon Valley Index is so valuable. State of the Valley is one of the most important meetings of the year for me.”

“My parents wanted me to pursue a degree in computer science engineering at San Jose State University because I was strong in math,” says Edesa. “For my first semester, I took all computer science (CS) classes with the exception of one elective which was an American history and political science class from Dr. Stephen Van Beek. By the end of the semester I did not do well in every CS class but got an A in the political science class.

“I loved it. The ability to make a change is the most important factor of political science—how the discourse can sway policy to change people’s lives. It was then clear to me what is my calling and true passion. I knew I wasn’t going to be a lawyer or a teacher but I still wanted to make a difference so I changed my major and got my BA in political science.”

After graduation, Edesa landed her first job as a legislative aide to state assemblywoman Elaine Alquist. After two years in the district office solving every day issues of constituents, she became a senior policy aide to San Jose City Council member Linda LeZotte for the next two years.

In 2001 Edesa became a development officer for the San Jose Redevelopment Agency, where she spent six years before joining San Jose City Council member Kansen Chu as his chief of staff.

In 2008, Edesa became a delegate for Hillary Clinton and traveled to Denver to hear Clinton speak at the Democratic National Convention. She brought her mother and her 3-year-old daughter, she told the Mercury News at the time, to honor her parents’ determination to give her a chance to succeed and to pay tribute to “the strongest woman in my life and an inspiration to me.”

Even as a mother of three young children, a busy career, and countless hours of volunteer work, Edesa completed her Master’s in Public Administration degree from San Jose State University in 2010. 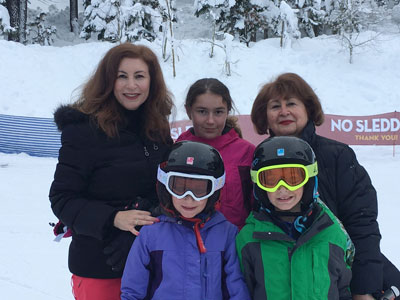 In 2012 Bitbadal ran unsuccessfully for the San Jose City Council in District 10. She’s proud of the campaign she ran, and, undeterred by the loss, she focused on continuing her public service via her career in economic development.

She’s quite active in her community. She currently serves as a San Jose planning commissioner and is a former chair of the commission. She also contributes her time to other endeavors, including volunteering her time, on a weekly basis, at her children’s school.